other examples.. spaces/places like seen in Iwan’s talk: Madrid; Cuba; Rojava; Ikaria; rebel architecture; occupy sandy – via Adam; lagos, occupy movement; Teddy; half a house ness; and many others… some in here: living spaces; some here: city ness; our vision: city sketchup, ..  .. …

Self-organization is a process where some form of global order or coordination arises out of the local interactions between the components of an initially disordered system. This process is spontaneous: it is not directed or controlled by any agent or subsystem inside or outside of the system; however, the laws followed by the process and its initial conditions may have been chosen or caused by an agent. It is often triggered by random fluctuations that are amplified by positive feedback. The resulting organization is wholly decentralized or distributed over all the components of the system. As such it is typically very robust and able to survive and self-repair substantial damage or perturbations. In chaos theory it is discussed in terms of islands of predictability in a sea of chaotic unpredictability.

Self-organization occurs in a variety of physical, chemical, biological, social and cognitive systems. Common examples are crystallization, the emergence of convection patterns in a liquid heated from below, chemical oscillators, swarming in groups of animals, and the way neural networks learn to recognize complex patterns.

Only certain kinds of networks are self-organizing. These are known as small-world networks, or scale-free networks. These emerge from bottom-up interactions, and appear to be limitless in size.

it’s as if the .. self-directed individual/family gets its self-directedness ginormously small until it’s dancing fluently random, chaotic/chaordic, with the entire system..

[self-directed in the sense of each person/atom… is guided by their own curiosity rather than some extrinsic motivator.. at least if we’re seeking an ultimate.. ongoingly sustained system.. ecosystem. the direction being via whimsy rather than plan, a listening to your gut, self-reflection, mind wandering ness..] 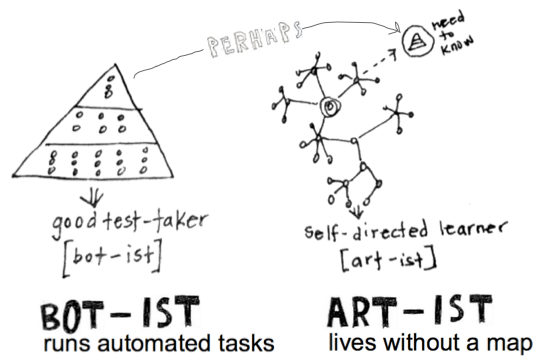 the emergence happens during this zoom dance. causing both – the individual self-directedness – and the self-organzing system (and which is which really?) to be ongoingly in perpetual beta..ness… embracing uncertainty.

perhaps.. in order to get back/to our natural self org tendencies (of an undisturbed ecosystem) we first (simultaneous) need to undo our hierarchical listening ie: 2 convers as infra

2. no agenda – emergence based listening/dancing in space of permission w/nothing to prove.. ie: free dom

talk at newcastle in 2010 (excellent overview of 12 years of Sugata‘s research):

31 min – the learners had invented their own pedagogy…
32 min – when learners have interest – education happens..

self-organising systems: where the system structure appears without explicit intervention from outside the system

everything is self-organizing system..

inside one – no need of outside intervention, w/o it , will produce emergence – the appearance of a property not previously observed as a functional characteristic of the function, it’s not supposed to happen, but it happens.

education is self-organizing system.. where learning is the emergence phenomenon

An additional, and major, problem is that convergence strategies aren’t effective at adapting to new situations that require unexpectedly different behaviours (that is to say, they’re not good at improvisation).

On the contrary, the brain lacks any sort of static, centralised structure. “Unity of mind” is constituted through instances of grand-scale synchronization, whereupon different neuronal areas act transiently in coordination. These instances of synchronization have a limited lifespan so the brain doesn’t get stuck in a specific sync-mode.

We believe it’s only a matter time until society organizes to dismantle the electoral space. There are, in fact, various initiatives underway with this purpose in mind.  We predict that only those who have understood the logic of distributed, networked processes of self-organisation and participation will succeed.

i don’t believe in training people to do things. liberate them & they train themselves. help them analyze what’s already in them.  – Myles Horton (via Carol)

The formula for overturning the world, we didn’t seek it in books, but in wandering. – Guy Debord (via Mary Ann)

This is just part of the process we call “self-organizing.”

It is a natural human process, a result of which, we fall into ourroles. In other words, roles are the individual identities we assume — the roles we will play — in the organized interactions that we enter into in order to distribute the energy load required to fulfill our individual values (needs). Roles in turn, define the set of objectives that the individual must perform in the action that has been organized to distribute the energy load. People organize themselves to take up a role as part of this performance-action; but their own reasons for doing so are driven by complex value-streams that are in the process of continuous negotiation. The success of the organized performance depends upon fulfilling individual roles, which in turn depend upon maintaining sufficient relational stability or sustaining a threshold degree of coherence in the complex responsive processes operating at the level of the value-streams.

The challenge in self-organizing processes, is that ..

we are not used to letting go ..

..of old identities and shape-shifting into new ones. We are uncomfortable in the phases of transition, where identities are not yet fixed, or fixed identities are being challenged in the process of negotiation. This is why..

we are so obsessed with fixed roles..

perpetual beta ness.. stuck to labels.. to the death of us.. perpetuate\ing not us ness via broken feedback loop

Some people believe this anxiety around identity and role-play is a permanent aspect of our human condition. ..I believe ..we have lived our entire lives inside institutions where role-identities represent authoritarian and disciplinary power over us. In other words, institutional roles represent the structural violence that operates within them.

These structures would allow for the emergence, through self-organization, of the full spectrum of roles and identities that humans would want to perform while being together.

self org in syria

Reclamation and autonomy in territories across Syria where revolutionary self-determination is still present, active and hopeful against all odds. These are the stories that the forces of the status quo are so terribly afraid of.

in our own self interest to echo and preserve such stories of social experimentation, liberation and self organization that are still taking place across Syria and many other awakened communities across the Middle East and the broader Global South.

from  Dana Meadow’s thinking in systems:

the most marvelous characteristic of some complex systems is their ability to learn, diversity, complexify, evolve..

these would be the complex systems deep enough.. ie: organism as fractal

this capacity of a system to make its own structure more complex is called self org..

self org is such a common property, particularly of living systems, that we take it for granted. if we didn’t, we would be dazzled by the unfolding systems of our world. and ..

if we weren’t nearly blind to the property of self org, we would do better at encouraging, rather than destroying, the self-organizing capacities of the systems of which we are a part..

like resilience, self org is often sacrificed for purposes of short term productivity and stability..  productivity and stability are the usual excuses for turning creative human beings into mechanical adjuncts to production processes. or for narrowing the genetic variability of crop plants.. or for establishing bureaucracies and theories of knowledge that treat people as if they were only numbers..

self org produces heterogeneity and unpredictability. it is likely to come up w whole new structures, whole new ways of doing things.. it requires freedom and experimentation, and a certain amount of disorder..

whole new structure: a people experiment.. via 2 convos.. as infra

these conditions that encourage self org often can be scary for individual and threatening to power structures.. as a consequence ed systems may restrict he creative powers of children instead of stimulating those powers. economic policies may lean toward supporting established, powerful enterprise rather than upstart new ones.. and many govts prefer their people not to be too self organizing..

fortunately, self org is such a basic property of living systems that even the most overbearing power structure can never fully kill it, although in the name of law and order, self org can be suppressed for long, barren, cruel, boring periods..

in the process of creating new structure and increasing complexity, one thing that a self org ing system often generates is hierarchy..

complex systems can evolve from simple systems only if there are stable intermediate forms. the resulting com;ex forms will naturally be hierarchic.. that my explain why hierarchies are so common in the systems nature presents to us..among all possible complex forms, hierarchies are the only ones that have had the time to evolve..

hierarchies are brilliant systems inventions, not only because they give a system stability and resilience, but also because they reduce the amount of info that any part of the system has to keep track of..

in hierarchical systems relationship w/in each subsystem are denser and stronger than relationships between subsystems..  everything is still connected to everything else, but not equally strongly..  no level is overwhelmed w info..

hierarchies evolve from the lowest level up.. from the pieces to the whole, from cell to organ to organism.. from individual to team.. the original purpose of a hierarchy is always to help its originating subsystem do their jobs better.. this is something unfortunately that both the higher and the lower levels of a greatly articulated hierarchy easily can forget.. therefore, many systems are not meeting our goals because of malfunctioning hierarchies..

just as damaging as suboptimization, of course, is the problem of too much central control..  if the brain controlled each cell so tightly that the cell could not perform its self maintenance functions, the whole org could die..

to be a highly functional system, hierarchy must balance the welfare, freedoms, and responsibilities of the subsystems and total system.. there must be enough central control to achieve coordination toward the large system goal, and enough autonomy to keep all subsystems flourishing, functioning and self organising..

resilience, self org, and hierarchy are three of the reasons dynamic systems can work so well..

then this on undisturbed ecosystem:

in undisturbed ecosystems ..the average individual, species, or population, left to its own devices, behaves in ways that serve and stabilize the whole..’ –Dana Meadows

wengrow/graeber top down law: ‘There is no reason to believe that small-scale groups are especially likely to be egalitarian, or that large ones must necessarily have kings, presidents, or bureaucracies. These are just prejudices stated as facts.. there is absolutely no evidence that top-down structures of rule are the necessary consequence of large-scale organization.’