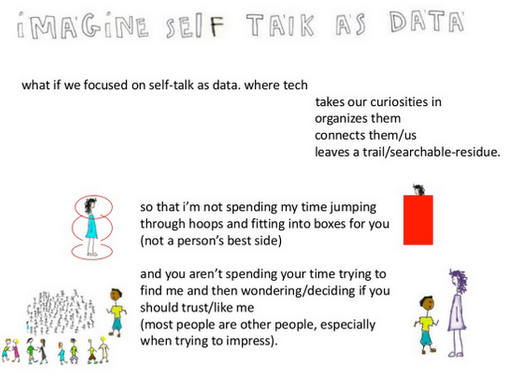 and now in self-talk deck:

essence of ni ness.. ie: a world where 7 billion people are doing the thing they can’t not do. everyday.

from James Baldwin (via Maria):

Perhaps the primary distinction of the artist is that he must actively cultivate that state which most men, necessarily, must avoid; the state of being alone.

self-talk as data [document everything ness].. as we are set free to be us/artists.. all of us..

Most of us are not compelled to linger with the knowledge of our aloneness, for it is a knowledge that can paralyze all action in this world. There are, forever, swamps to be drained, cities to be created, mines to be exploited, children to be fed. None of these things can be done alone. But the conquest of the physical world is not man’s only duty. He is also enjoined to conquer the great wilderness of himself. The precise role of the artist, then, is to illuminate that darkness, blaze roads through that vast forest, so that we will not, in all our doing, lose sight of its purpose, which is, after all, to make the world a more human dwelling place.

2 needs – toward us.. toward eudaimoniative surplus

It is for this reason that all societies have battled with the incorrigible disturber of the peace — the artist. …And it is absolutely inevitable that when a tradition has been evolved, whatever the tradition is, the people, in general, will suppose it to have existed from before the beginning of time and will be most unwilling and indeed unable to conceive of any changes in it. They do not know how they will live without those traditions that have given them their identity. Their reaction, when it is suggested that they can or that they must, is panic… And a higher level of consciousness among the people is the only hope we have, now or in the future, of minimizing human damage.

In a sentiment that Jeanette Winterson would come to echo decades later — “Art … says, don’t accept things for their face value; you don’t have to go along with any of this; you can think for yourself.”

The artist is distinguished from all other responsible actors in society — the politicians, legislators, educators, and scientists — by the fact that he is his own test tube, his own laboratory, working according to very rigorous rules, however unstated these may be, and cannot allow any consideration to supersede his responsibility to reveal all that he can possibly discover concerning the mystery of the human being.

Societies never know it, but the war of an artist with his society is a lover’s war, and he does, at his best, what lovers do, which is to reveal the beloved to himself and, with that revelation, to make freedom real.

2/ This new understanding of competence suggests that the capability to act is a social process. People are simultaneously forming and being formed by each other at the same time — all the time https://t.co/LMH7WV9Wdz (http://twitter.com/EskoKilpi/status/998536611196489728?s=17)

Information is the energy of organizing.

imagine self talk as the organizing input.. curiosity as the energy of organizing

gil quote tweets about w this:

“Everything has been said, yet few have taken notice of it.

Since all our knowledge is essentially banal, it can only be of value to minds that are not”.

Cultivation of a less banal mind is the task of beings with a reflexive consciousness but no culture OF same. https://t.co/FZFnMPPcbr

Thomas Bernhard on Walking, Thinking, and the Paradox of Self-Reflection

And so, in our quest to fathom the human condition, the only direction to look is inward. That is the noble direction to look. It is a direction that forgoes ready-made answers and turns to the highly personal journey of constructing our own meaning. It is a direction that leads to the very heart of creative expression and the source of our most resonant narratives. Science is a powerful, exquisite tool for grasping an external reality. But within that rubric, within that understanding, everything else is the human species contemplating itself, grasping what it needs to carry on, and telling a story that reverberates into the darkness, a story carved of sound and etched into silence, a story that, at its best, stirs the soul.. t

on each heart et al.. let’s try self-talk as data