As mathematical equations, fractals are usually nowhere differentiable. An infinite fractal curve can be perceived of as winding through space differently from an ordinary line, still being a 1-dimensional line yet having a fractal dimension indicating it also resembles a surface.

so for public (not just some community of practice or some individual, but concerning all the people) … that is multiple, polyfocus, eclectic, what’s the one story/purpose/vision that can hold us together.?

might their be a universal narrative, of which we can come together with confidence of our interconnectedness and yet still respect/facilitate our differences.

perhaps attachment (being known by someone) and authenticity (being you) – perhaps curiosity – resonates with every soul.

I favor the idea of providing ground to build a public realm and give opportunities for discussing and negotiating what is good for all, rather than the idea of strengthening communities in their struggle to define their own commons. Relating commons to groups of “similar” people bears the danger of eventually creating closed communities. People may thus define themselves as commoners by excluding others from their milieu, from their own privileged commons. Conceptualizing commons on the basis of the public, however, does not focus on similarities or commonalities but on the very differences between people that can possibly meet on a purposefully instituted common ground.      Stavros Starvides

Fractals are not limited to geometric patterns, but can also describe processes in time. 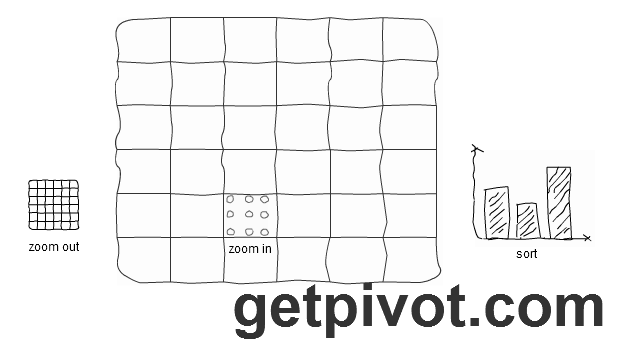 …the ability of the world’s population to volunteer and to contribute and collaborate on large and sometimes global projects. 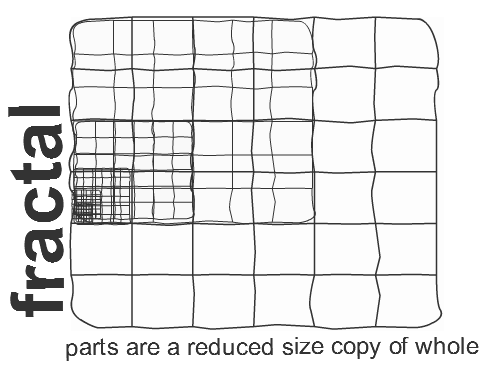 We believe that. We know that. That’s where we have found strength and courage and ideas.

He adds, …but there is no cohesive integrated structure that amplifies the affect of the research.

That resonated with us.. because that was what we had spent the year questioning and noticing and trying to resolve. How can so many people be doing cool things and still there is no standard change.

We’re wondering if a standard process, no matter the size/color of the copy, would be a good fractal…as opposed to the current standardized content/tests.

Not a forced standardization of people, but rather a discovery of natural serendipitous connections that already exist. Not a curriculum agenda, or a student agenda, or a teacher agenda, or an admin agenda, ..  a people agenda.    [via mathematical patterns rather than mere repetition]

Fractals and getpivot work together nicely.
some examples

We’re wondering what will happen if we pay more attention to the connections we see when we zoom in and out.
And for the sake of those that aren’t even getting to be a part of all this…
We’re wondering what will happen if we start to officially document this process and these connections in a sophisticated, cohesive manner.
Our goal is that by year’s end we have ample evidence of the rigor and encompassing knowledge/wisdom, that a process based on personalization and self-motivation allows. We’re seeking national validation for reform.

Today’s “school” is an incredible opportunity for rigorous endeavors in things that matter.
An idea that most of us currently (myself included) have honestly no comprehension of.
The new of ed, is the ability to differentiate and specialize to infinity.
This new begs maneuvering via getpivot and fractal-type modeling.

reading Taleb‘s black swan.. (timing is crazy. all the time. way late to the ball game. yet at the perfect time.)

Fractal is a word Mandelbrot coined to describe the geometry of the rough and broken—from the Latin fractus, the origin of fractured. Fractality is the repetition of geometric patterns at different scales, revealing smaller and smaller versions of themselves. Small parts resemble, to some degree, the whole. I will try to show in this chapter how the fractal applies to the brand of uncertainty that should bear Mandelbrot’s name: Mandelbrotian randomness.

The veins in leaves look like branches; branches look like trees; rocks look like small mountains. There is no qualitative change when an object changes size.

This character of self-affinity implies that one deceptively short and simple rule of iteration can be used, either by a computer or, more randomly, by Mother Nature, to build shapes of seemingly great complexity. This can come in handy for computer graphics, but, more important, it is how nature works. Mandelbrot designed the mathematical object now known as the Mandelbrot set, the most famous object in the history of mathematics. It became popular with followers of chaos theory because it generates pictures of ever increasing complexity by using a deceptively minuscule recursive rule; recursive means that something can be reapplied to itself infinitely. You can look at the set at smaller and smaller resolutions without ever reaching the limit; you will continue to see recognizable shapes. The shapes are never the same, yet they bear an affinity to one another, a strong family resemblance.

Fractals initially made Benoît M. a pariah in the mathematical establishment.

So Mandelbrot spent time as an intellectual refugee at an IBM research center in upstate New York. It was a f*** you money situation, as IBM let him do whatever he felt like doing.

the luxury to do whatever you want. imagine 7 billion people with that (money absent) access/privilege. nclb redefined. 100% google for 100% people. 24/7.

The computer age helped him become one of the most influential mathematicians in history, in terms of the applications of his work, way before his acceptance by the ivory tower. We will see that, in addition to its universality, his work offers an unusual attribute: it is remarkably easy to understand.

Mandelbrot came to France from Warsaw in 1936, at the age of twelve. Owing to the vicissitudes of a clandestine life during Nazi-occupied France, he was spared some of the conventional Gallic education with its uninspiring algebraic drills, becoming largely self-taught.

..in the generation of visual intuitions lies a dialectic between the mathematician and the objects generated.

The rug at eye level corresponds to Mediocristan and the law of large numbers: I am seeing the sum of undulations, and these iron out. This is like Gaussian randomness: the reason my cup of coffee does not jump is that the sum of all of its moving particles becomes smooth. Likewise, you reach certainties by adding up small Gaussian uncertainties: this is the law of large numbers.

The key here is that the fractal has numerical or statistical measures that are (somewhat) preserved across scales—the ratio is the same, unlike the Gaussian.

reading Yochai Benkler‘s wealth of networks.. and seeing this fractal (i see so often) of school climate/culture to political/public climate/culture:

seeing the fractal ness… of people finding things out here… then continuing to argue/flap about… different…. things that don’t matter (ie:still wasting time et al.. not grokking what matters… not quiet/free enough).

this fractal plays out in schools as – saying we are giving ie: stu voice ness – when they need detox time before they could even know what they want, otherwise.. anything other.. sounds good.. and the flapping/debating begins.

showing tiny view people get (spinach or rock ness).. that they then act upon… respond to… in the false assumption of freedom… of assuming that they are actually thinking… rather than just following another lead/er

on common core – warning – not totally gentle – my bad