intro’d to Jaco via Moses.. Moses was explaining the invented vs invited thinking..

spaces govt and ngo’s create – this is where participation is mainly – so when citizens speak – it’s coming to a space that’s already been formalized.. so – come in tell us what you want and we’ll see what we can do for you..

spaces citizens create themselves.. social life that is already in societies..

organic/explosive… harder to understand… more vibrant.. not perfect in any way – but a better indication of what’s happening on the ground..

need more of this…

we don’t want to participate – we want to create..

everyone is trying to fix more participation.. but afraid of letting go for people to actually create

most importantly – how can we do it w/o anyone else.. and what do we see as the problems.. rather than others coming in and saying what the priorities/problems are..

agenda being set by donors.. work being done on them

connections between citizens and communities are not really a focus

allow participation, but not a setting of the agenda

more videos/insight from Jaco here (all from 2011 when he was a fellow for the kettering foundation.. can’t find him now):

Jacobus (Jaco) Roets is currently an international research fellow at the Charles Kettering Foundation in Dayton, Ohio, where he represents Idasa (an African Democracy Institute). His current interests are around active citizenship, political association, and civic learning, with a particular focus on communities in South Africa pre- and post-apartheid. He has experience in working with communities in South Africa, while prior to joining the Fellowship at Kettering he was a program officer for a civil society capacity building program in the Middle East. One of the key components regarding his work with Idasa and Kettering is strategizing around innovative ways to foster learning exchanges between donor organizations, institutes, communities and citizens. His work experience has exposed him to the complexities of donor/recipient relations, and the challenge of putting citizens at the center of their own development agenda.

Jaco has an Degree in International Relations (Hons) from the University of Pretoria. He is fluent in both English and Afrikaans. He also speaks French (Intermediate) and at present he is studying Farsi (Persian). Jaco joined Idasa in 2006, and since then he has worked with communities in Zimbabwe, Malawi, Iran, Turkey, Sierra Leone, Sudan, the Democratic Republic of the Congo, Sri Lanka, India and Mozambique. 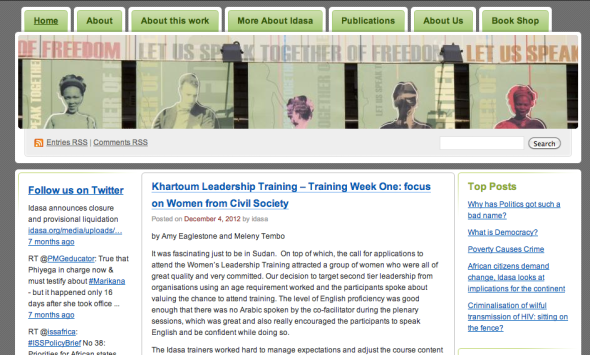 from facebook page – that doesn’t appear to have movement past march either:

Idasa is Africa’s premier democracy institute. From fighting apartheid, to combating corruption, to empowering citizens, Idasa has been committed to building democratic societies in Africa for over 20 years.
Mission

Idasa’s mission is to promote sustainable democracy based on active citizenship, democratic institutions and social justice.

back to invited vs invented..