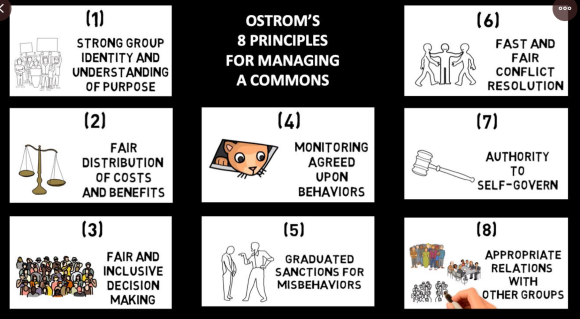 @hrheingold: A one page summary of Governing The Commons: http://cooperationcommons.com/node/361

@/KateRaworth: What does it take to manage a commons well? Elinor Ostrom had it down to 8 principles. Commoners, listen up and let’s learn. These are 21st century skills… https://vimeo.com/67418343

‘governing the commons’.. perhaps part/essence of the tragedy

ie: if we think we need to be governed.. perhaps a red flag we’ve never let go enough to see/be natural commoning

kind of hard (if not impossible) to hear the conversations/communications/voices we need to hear (ie: enough) in order to dance the dance (of commoning/eudaimoniative surplus/undisturbed ecosystem) if we’re busy with governing and being governing.. too much ness.. et al

1\ strong group id and understanding of purpose – rather.. daily curiosity (only label) over group id.. (marsh label law et al).. beyond understanding.. grokking.. comes from inside.. everyday.. can’t not

2\ fair distribution of costs/benefits – rather.. equity – everyone getting a go everyday.. sans money (any form of measuring/accounting)

4\ monitoring agreed upon behaviors – rather.. assume good.. unconditional free\dom (inspectors of inspectors is a distraction/cancer)

these all become irrelevant (and a distraction/cancer) if *infrastructure set up in a humane way to begin with.. elinor et al.. reacting to how whales act in sea world.. not how truly free human beings act.. ie: if we think we need incentives (which all 8 could be classified as) we’re doing it wrong..

*infra we need – 2 convers as infra via tech as it could be.. (listening to every voice.. every day).. aka: augmenting interconnectedness back/to an undisturbed ecosystem.. ‘in undisturbed ecosystems ..the average individual, species, or population, left to its own devices, behaves in ways that serve and stabilize the whole..’ –Dana Meadows

Summary of Ostrom’s “Governing the Commons,” one of the most important scientific approaches to social dilemmas – shd be more widely read https://t.co/wYnQzWoExz

krishnamurti free will law.. we have no idea

She found that in many different cultures all over the world, some groups would find ways to overcome the obstacles that defeated others – by creating contracts, agreements, incentives, constitutions, signals, media to enable cooperation for mutual benefit.

Systemic information about salinization of wells was an obstacle to water-sharing agreements in California; individual water-users knew whether their wells were pumping salt, but none of them had compiled the information to see the overall pattern in the watershed, and no individual was willing to pay the price of gathering it.

perhaps obstacle is people have never been free.. so never been our indigenous selves.. betting.. like h/g via suzman.. we’d not need systemic info about salinization of wells and water sharing.. we have no idea what we’d be like

Ostrom argued from well-documented cases of informal institutions that had evolved into formal if localized arrangements, sometimes lasting for centuries, that groups could evolve effective institutions without externally coercive authority – if they could solve the “common set of problems.”

Ostrom claims that “all efforts to organize collective action, whether by an external ruler, an entrepreneur, or a set of principals who wish to gain collective benefits, must address a common set of problems.” *These problems are “coping with free-riding, solving commitment problems, arranging for the supply of new institutions, and monitoring individual compliance with sets of rules.“

4/ Ostrom found that groups that are able to organize and govern their behavior successfully are marked by the following design principles:

1\ how could they be clearly defined.. if alive and changing everyday.. no boundaries (borders)(marsh label law) – unless we want to call idio-jargon and/or daily curiosity labels boundaries

4\ mech to listen to all the voices

7\ i know you ness and detox

what if tragedy ness (non commons ness).. has more to do with any from of measuring/accounting/reputation/exhortation.. than going beyond community scale

ie: needs to be all of us or it won’t work.. otherwise we get tragedy ness of enclosure ..

@mbauwens @LindaLarsonKemp This is good. But there is a piece it is missing: how to identify and deal with bad actors. Someone determined to be a bad actor can destroy the good work of millions of ‘game b’ players. There has to be a defense constructed against this phenomenon as well. First.
Original Tweet: https://twitter.com/jientho/status/1273936267005345794

@jientho @LindaLarsonKemp yes, and that is an essential part of the findings of elinor ostrom in her study of ‘governing the commons’; game b is weak on commons so far
Original Tweet: https://twitter.com/mbauwens/status/1274519435605311489

what if those are wrong (ostrom’s findings of governing).. what if we need to go deeper than ‘identifying bad actors..’
what if that is what’s weakening commoning

deeper ie: gershenfeld something else law

tragedy of the non common