actionpath (issue is brought to your attention when you walk by it) as – in the middle of seeclickfix (more local/cold issues) and popvox (more govt hot issues..?)

25 min – participation rather than fired up activism

31 min – popvox to go local..? it’s more for a specific problem – local is certainly in the future – really an opportunity for all of us in the civic space for us to work together..

nodes talking to each other

peter levine’s new book – implementation is usually directed at citizens as to what needs to be done – calls it an ease of participation… but he also wants that deliberative democracy motivation.. the ones that set the agenda.. a civic renewal

so what if we don’t need that.. beyond spinach or rock

57 min – as they’re walking down the street 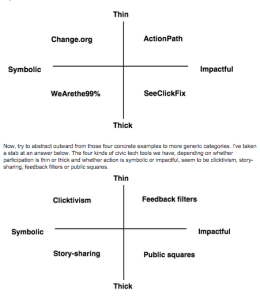 occasionally thwarting powerful overlords – like Egypt’s ex-dictator Hosni Mubarak – is not the same as transforming the system that confers so many advantages upon them.

We must remember that the purpose of democracy isn’t only for each of us to have our say, but to blend individual opinions into common agreements. Instead of letting our digital tools drive us in ways that exacerbate our differences, we must insist on tools that bring us together as equals to solve problems. Interestingly, the internet’s own early engineers understood this challenge very well. ‘We reject: kings, presidents and voting,’ said David Clark at the 1992 meeting of the Internet Engineering Task Force. ‘We believe in: rough consensus and running code.’

4/20/16 6:34 AM
Some cranky post-primary thoughts about our so-called democracy: civichall.org/civicist/votin…
The game we are all obsessing about, called voting for a leader, doesn’t work if its purpose is to actually produce a democracy, which I think most of us would define the way the ancient Greeks defined it, as a system where the people (“demos”) are in power (“cracy” = rule by).

first read through this sentence… cracy caught my eye as crazy… which is perhaps why we haven’t yet let go enough to see what we’re capable of… ie: we’re afraid of crazy.
perhaps crazy.. is what we need to embrace most. esp since today we have tech that is plenty capable of helping to facilitate our 7 billion plus craziness.
perhaps that’s what the world needs most.. in my mind.. crazy means you’re alive.. wild.. et al..

[..]
Roslyn Fuller points out in her excellent new book, Beasts and Gods: How Democracy Changed Its Meaning and Lost Its Purpose, all systems for apportioning power and representation based on voting fail at the job of choosing representative leaders. They fail for two core reasons. The first is mathematical; the second is economic.

[..]
We live in a hollowed out system that calls itself a democracy, and fights over the meaning of citizenship to the point of denying it to millions of our neighbors, but that guarantees full participation to only a very few well-connected Americans.

perhaps we use tech we already have to redefine decision making.. to match what our hearts already know to disengage from consensus
ie: hosting life bits.. so they can io dance.. viaself talk as data.. et al

#GoogleNewsInitiative in US aims to reach 1M teens with $3m grant program for training in critical thinking. Here’s a little critical thinking: there are 41M teens in USA, so any chance we can get other folks to pony this up to real scale?

Google/Alphabet made something in the range of $20B in profit in 2016 so it could scale these programs much bigger.

would rather we went deeper

critical thinking comes more from facilitating curiosity than any training

as it could be

Shoshana Zuboff’s The Age of Surveillance Capitalism—the most important book I have ever read on the intersection of technology, politics, and society—offers a radical reinterpretation of the changes the tech industry has wrought.

McNamee tried to sound an alarm with his protégé. But he was fobbed off on one of Zuck’s lieutenants, who treated his warnings as a “public relations problem.” So he decided to go public with his criticisms, teaming up with former Google ethicist Tristan Harris to create a new organization, the Center for Humane Technology, and to educate lawmakers on Capitol Hill.

Once Page and Brin agreed to start mining user data to better match ads to their interests, the company’s fortune was made.

We may individually want to escape this new enclosure movement, but Zuboff is right. We are caught in a Faustian bargain. Being connected is essential for participating in life, but the internet has been commandeered by commerce, and “commerce is now subordinated to surveillance capitalism.”

The Age of Surveillance Capitalism is not an obituary for democracy. Zuboff has provided the latticework on which to hang useful new initiatives. “**We have yet to invent the politics and new forms of collaborative action …t.. that effectively assert the people’s right to a human future,” she writes. But now that she has named the system, described it, analyzed it, and helped us understand it, we may begin to change it.

missing piece: tech as it could be (listening to every voice every day)