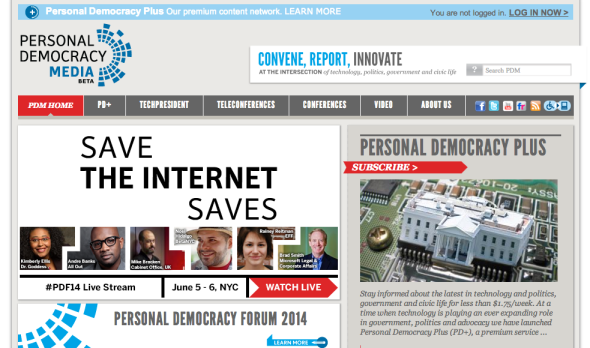 Technology and the Internet are changing democracy in America. This site is one hub for the conversation already underway between political practitioners and technologists, as well as anyone invigorated by the potential of all this to open up the process and engage more people in all the things that we can and must do together as citizens. We value your input and ideas.

A new force, rooted in new tools and practices built on and around the Internet, is rising alongside the old system of money intensive broadcast politics.

Today, for almost no money, anyone can be a reporter, a community organizer, an ad-maker, a publisher, a money-raiser, or a leader.

If what they have to say is compelling, it will spread.

The cost of finding like-minded souls, banding together, and speaking to the powerful has dropped to almost zero.

More people, everyday, are discovering this new power. After years of being treated like passive subjects of marketing and manipulation, citizens want to be heard.

Members expect a say in the decision-making process of the networked organizations they join. Readers want to talk back to the news-makers. Citizens are insisting on more openness and transparency from government and from corporations too.

All the old institutions and players – big money, top-down parties, big-foot journalism, cloistered organizations – must adapt fast or face losing status and power, and some of them are. That evolution is happening as some governments, political organizations, businesses and nonprofits begin to embrace participation and transparency.

The realization of “Personal Democracy,” where everyone is a full participant, is coming.

Since 2004, Personal Democracy Media has helped nurture a world-wide conversation about technology’s impact on government and politics, and society – providing a place to meet the people who are making that change happen, discover the tools powering the new civic conversation, spot the early trends, and to share in understanding and embracing this dynamic new force. Many of those who are challenging the status quo, learned what they know, or found people to collaborate with, by being a part of Personal Democracy Media.

Now as Personal Democracy Media, that effort will grow as we work to contribute authoritative news, tools and resources focused on adapting to and thriving in a world where together we are building and fulfilling the promise of a 21st century democracy. (Updated January, 2011)

intro’d to personal democracy via #pdf14

snowden, seeclickfix, greenfield, tumml, handup, …. check out pd14 archive (hope there is one)

Need to remember that “there’s a big difference between politics and civic” says @marcidale at #PDF14Original Tweet: https://twitter.com/pdmteam/status/474935710198558720

“The greater our ability to see what’s going on in Congress, the greater the dissatisfaction with Congress” #pdf14Original Tweet: https://twitter.com/Tableteer/status/474936150155874304

@marcidale World has never had a transparent, participatory, inclusive, responsive democracy, so no models #PDF14
@marcidale links new govt transparency to govt paralysis. Now that the sausage making is visible, govt “has stopped making sausage.” #PDF14
It is expensive to be truly informed about what’s going on in Congress. @marcidale #PDF14
so maybe we change that – make it less about knowing what’s going on in congress and more about whats going on w/7 billion people
How did I not know about this? It’s great! bit.ly/1pM14px @marcidale #PDF14
popvox
Now on stage: @StacyDon @OmidyarNetwork speaking about next steps for personal democracy &amp; technology #PDF14Original Tweet: https://twitter.com/GlobalIntegrity/status/474943179327021056
Adam Greenfield @agpublic

.@alexgoldmark Transparency for whom? For what purposes, instrumentalized and operationalized in what specific ways?

yep @karmel80: I understand @handup showing the individual gets people to care and help bc it’s concrete. But still makes me cringe. #pdf14

Same. A “linked-in” for blue-collar workers is fine but the REAL problem they face is not on supply side. It’s demand for their work. #pdf14

Sorry, #pdf14. Research is clear: Job training, networking, etc. are rounding error on what US impedes US workers: lack of good jobs. #pdf14

The poor don’t need rich people donating. They need economic justice. There’s not an app for that.  #pdf14

ask what you might do differently if you know you’ll be having to repeat it over and over. leaving residues of trust – @cshirky #PDF14

time itself as strategy – @cshirky #PDF14

changing how we measure ed – @SlaughterAM #PDF14 – or perhaps stop measuring it.. because now we can

technical skill is no longer enough. we have to solve the very real problem of how to have people step up. – @PatrickRuffini #PDF14

“Potholes are the gateway drug to civic engagement” #PDF14

with record unemployment – we have this goldmine under our feet. a new way to participate. – @bchesky @Airbnb #PDF14

we’re often afraid of things we don’t understand. before we regulate things away perhpas we listen in a bit more – @bchesky @Airbnb #PDF14

things might have gotten done yrs ago but bonding from knowing more of the story not so much – @benberkowitz en.seeclickfix.com #PDF14

i get to look through this really beautiful lens/platform -of neighbors caring for each other – @benberkowitz en.seeclickfix.com #PDF14

this is the kind of thing we need to optimize for.. – @benberkowitz en.seeclickfix.com #PDF14

connecting neighbors as they work together on their neighborhood – @benberkowitz en.seeclickfix.com #PDF14

one by one remarkably.. things start to change. people clearly care about their neighborhood – @benberkowitz en.seeclickfix.com #PDF14

sense of ownership – from those working iterations – @benberkowitz en.seeclickfix.com #PDF14

The main hall livestream is up for the last two hours of #PDF14 personaldemocracy.com/conferences/ny…

Participatory democracy, says @drgoddess, creates an opportunity for anyone to become an activists. #pdf14

.@marcidale: the money spent on talking the talk vs walking the walk. #pdf14 pic.twitter.com/BRkQ0k2bLA

.@antheaws calls on academics to research what motivates people to act. What we do know: people act when needs meet results. #pdf14

.@antheaws calls on designers to stop designing for the “user they wish existed.” #pdf14

@pdmteam @antheaws – or maybe we design tech to do that. every day.

Localization: for people and the Earth: youtu.be/PucOhupKQa0 via @YouTube

bit.ly/1jZSefW Is a tool to map public data on properties. Transparency. #PDF14 @WELLO

#PDF14 is streaming live at personaldemocracy.com

.@zeynep “avoid ‘asphalt fetishism,’ but what capacity is on-line activism actually signaling? Even SOPA/PIPA might not work again. #pdf14

#pdf14 This, you guys. And it’s not just music. Whatever art is, however you define it, it has an… instagram.com/p/o3lydCgzFi/

jp to ed – you’re not pretending to be asleep #PDF14

Re: #security v. #privacy and life in general: ‘My motto has always been safety third.” – John Perry Barlow #PDF14

security is not the only value that americans treasure.. – Ed Snowden #PDF14