A semiconductor is a material which has electrical conductivity between that of a conductor such as copper and that of an insulator such as glass. Semiconductors are the foundation of modern electronics, including transistors, solar cells, light-emitting diodes (LEDs), quantum dots and digital and analog integrated circuits. The modern understanding of the properties of a semiconductor relies on quantum physics to explain the movement of electrons inside alattice of atoms. The increasing understanding of semiconductor materials and fabrication processes has made possible continuing increases in the complexity and speed of semiconductor devices, an effect known as Moore’s Law.

The conductivity of a semiconductor material increases with increasing temperature, behaviour opposite to that of a metal. Semiconductors can display a range of useful properties such as passing current more easily in one direction than the other, variable resistance, and sensitivity to light or heat. Because the conductive properties of a semiconductor material can be modified by controlled addition of impurities or by the application of electrical fields or light, devices made with semiconductors are very useful for amplification of signals, switching, and energy conversion.

Silicon is a chemical element with the symbol Si and atomic number 14. It is a tetravalent metalloid, less reactive than its chemical analog carbon, the nonmetal directly above it in the periodic table, but more reactive thangermanium, the metalloid directly below it in the table. Controversy about silicon’s character dates to its discovery; it was first prepared and characterized in pure form in 1823. In 1808, it was given the name silicium (from Latin:silex, hard stone or flint), with an -ium word-ending to suggest a metal, a name which the element retains in several non-English languages. However, its final English name, first suggested in 1817, reflects the more physically similar elements carbon and boron.

Silicon is the eighth most common element in the universe by mass, but very rarely occurs as the pure free element in nature. It is most widely distributed in dusts, sands, planetoids, and planets as various forms of silicon dioxide (silica) or silicates. Over 90% of the Earth’s crust is composed of silicate minerals, making silicon the second most abundant element in the Earth’s crust (about 28% by mass) after oxygen.

Doping a semiconductor such as silicon with a small amount of impurity atoms, such as phosphorus or boron, greatly increases the number of free electrons or holes within the semiconductor. When a doped semiconductor contains excess holes it is called “p-type”, and when it contains excess free electrons it is known as “n-type”, where p (positive for holes) or n (negative for electrons) is the sign of the charge of the majority mobile charge carriers. The semiconductor material used in devices is doped under highly controlled conditions in a fabrication facility, or fab, to control precisely the location and concentration of p- and n-type dopants. The junctions which form where n-type and p-type semiconductors join together are called p–n junctions.

so what if the chip is one (or 7 billion+) of a kind in ni/mesh networking. our daily choice via ongoing option for a personal fabrication/domain of one’s own of a common *basic theme

*basic theme: chip as platform based in each individual; data comes from daily self-talk (detox and/or curiosity); gathered in an echo chamber ness space by a non-agenda ish tech/app; data used to connect for potential gatherings and document for potential sharing (with others and self); purpose – to see better. a means to do a daily (24/7) zoom dance – individual to local to global. bypassing the hurdles we’ve encountered to date with any type of government. public ness via 2 conversations based on 2 needs and a cure.

[for those in ed – it’s like when twitter, poll everywhere, back channels came about.. and you could start to hear more voices. so like that – on steroids.. because not only can everyone speak – they’re supported/facilitated/allowed space to think w/o an agenda as well. and this data (daily self-talk) is not judged/graded/credentialed.. only used to connect… per curiosity.. per what matters to each person. heart beat ness. as the day ness. and with everyone. in the city ness.] 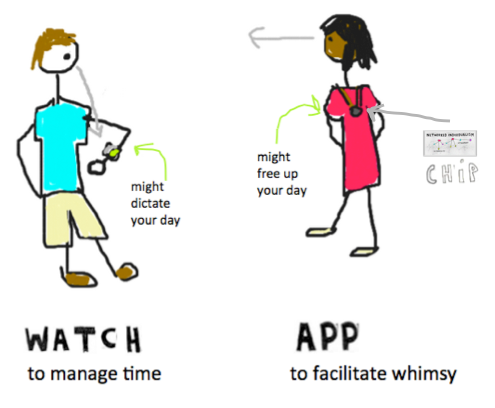 The $3 billion funding round will go towards a variety of projects designed to catapult semiconductor manufacturing past what IBM physical sciences director Supratik Guhacalls the “end of silicon scaling” in microchips.

Intel’s Edward Ross … Intel wants to produce the chips of choice for the maker movement.

Ross: Intel’s senior director of inventor platforms, who leads the team working on the Edison and Galileo chips. The Galileo chips were first introduced about a year ago as electronic training wheels for beginners and “makers” — the growing cadre of do-it-yourselfers who show off their inventions at Maker Faire events. The smaller, more powerful Edison is targeted at “pro-makers” interested in taking their designs a step further with potentially market-ready products.

You’ll continue to see evolutions of Galileo targeted toward that “I’m learning” realm — helping people to explore the space. And we’re huge, huge, huge supporters of the Maker Faires, so you will see Intel participating in the various Maker Faires and you will see us in universities and K-12 environments helping to teach and spread the word on how easy and fun it is to go invent stuff.

IBM Announces Computer Chips More Powerful Than Any In Existence http://t.co/Rj4toij60I /via @NYTimes

To Invent the Future, You Must Understand the Past getpocket.com/@cFnA0gbydu51a…

He who lives to see two or three generations is like a man who sits some time in the conjurer’s booth at a fair, and witnesses the performance twice or thrice in succession. ..

The tricks were meant to be seen only once, and when they are no longer a novelty and cease to deceive, their effect is gone.

so .. need history.. or to be old.. or to have zoom dance capabilites

The move by eight of Shockley’s employees to launch their own semiconductor operation called Fairchild Semiconductor in 1957 marked the first significant modern startup company in Silicon Valley.

Think of the transistor as the grain of sand at the core of the Silicon Valley pearl. The next layer of the pearl appeared when people strung together transistors, along with other discrete electronic components like resistors and capacitors, to make an entire electronic circuit on a single slice of silicon. This new device was called a microchip. Then someone came up with a specialized microchip that could be programmed: the microprocessor. The first pocket calculators were built around these microprocessors. Then someone figured out that it was possible to combine a microprocessor with other components and a screen — that was a computer. People wrote code for those computers to serve as operating systems and software on top of those systems. At some point people began connecting these computers to each other: networking. Then people realized it should be possible to “virtualize” these computers and store their contents off-site in a “cloud,” and it was also possible to search across the information stored in multiple computers. Then the networked computer was shrunk — keeping the key components of screen, keyboard, and pointing device (today a finger) — to build tablets and palm-sized machines called smart phones. Then people began writing apps for those mobile devices … .

People around the world have tried to reproduce Silicon Valley. No one has succeeded.

And no one will succeed because no place else — including Silicon Valley itself in its 2015 incarnation — could ever reproduce the unique concoction of academic research, technology, countercultural ideals and a California-specific type of Gold Rush reputation that attracts people with a high tolerance for risk and very little to lose. Partially through the passage of time, partially through deliberate effort by some entrepreneurs who tried to “give back” and others who tried to make a buck, this culture has become self-perpetuating.

“If we considered a scenario where people use Google voice search for just three minutes a day and we ran deep neural nets for our speech recognition system on the processing units we were using, we would have had to double the number of Google data centers!”

Nvidia, for its part, says the comparison isn’t entirely fair.

Google is also probably one of the few companies in the world with the money and the inclination to build a product from scratch in a completely new domain.

Day 3 of 2018: The computers are actually insecure. All of them. What fresh hell awaits tomorrow? https://t.co/NiNPPSE5vV

we have the means to make security irrelevant.. perhaps it’s time