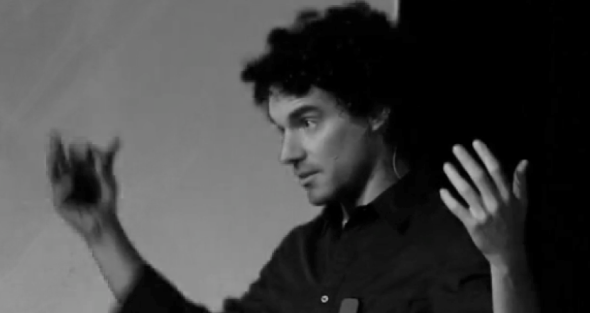 12 min – no charts, graphs, alerts, updates – a game where the only way to win is for the entire group to completely surrender

13 min – can become familiar with the sound of focus

14 min – what if some portion of the billions of dollars – focused on the inner world – the inner consciousness… tech – is our thoughts and imagination brought into physical form – like our thoughts – tech can run wild.. or… it can be our ally – help us toward peace

CAN TECHNOLOGY BE A TOOL TO HELP US REALIZE A PROFOUND SENSE OF PEACE AND WELLBEING?  CAN THE DEVICES AROUND US DO MORE THAN PROVIDE INFORMATION AND CHANGE BEHAVIOR?  WHAT IF OUR GADGETS GUIDED US TOWARD ACCEPTANCE AND BALANCE, INDEPENDENT OF CIRCUMSTANCE.  A LIFE IN FLOW.

THAT’S WHAT I’M WORKING ON.

Stoked to appear alongside good friend (and subject of a section in Stealing Fire, Mikey Siegel) . Though we take issue with the “landscaped eyebrow” comment, the rest is a solid survey of the scene ;)

How do we make this positive and not destructive, distracting and addictive?” he adds. “Can we help steer people toward their better angels and our collective nature in our search for these things?”

“What does that mean if you can create the technology that makes that accessible to everyone? ..t.. That’s like, I don’t know. It could alter all of humanity.

in 2011, he moved to a now infamous startup called Theranos. Siegel, who is verbose on most topics, is vague about what he did there.

had everything.. but not happy.. “I saw spiritual attainment and I thought, ‘That does not need to be religious. That can be scientific.'”And I wanted to create the technology to get there.”

what Mike and I have found is if you meditate too long, you decide your job is not for you.. t.. I’m not sure companies want you to be self-actualised to the point where you realise, ‘This isn’t working in a really kind of soulless way. I got it. I’m out.’ – @joshwhiton