image below links to (our version of) Wesch stages from his – how to run class. [and see this link for how we literally placed them side by side at first]:

self-directed cyclic grid (as we called it) for said class:

_______
the main idea was to not leave anything they (students in pre ap alg 2) needed to know (to pass class/tests) a mystery. it was handed (onlined) to them day 1. i, khan, many resources, were at their disposal, as were each other. (peer tutorials became popular).
the time was theirs.. in class and at home.

they ended up doing what they needed to for credit. (technically scores were a very tiny bit lower than other 90 students in pre ap alg 2 at beginning of year, and a very tiny bit higher at end of year.)
their experimentation led to a quiet revolution to (literally) redefine school as a means to hasten equity.

bold heroes – forever in my heart…

graphic below links to video jing talking about how we accessed the grid off our ning site – : 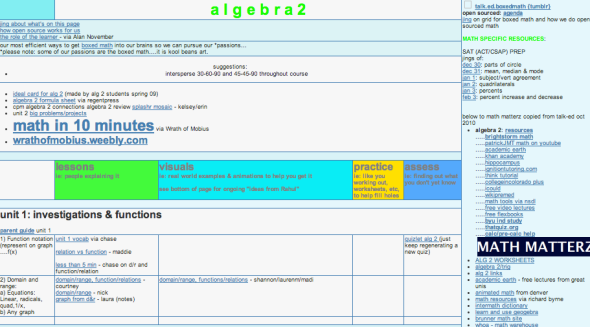 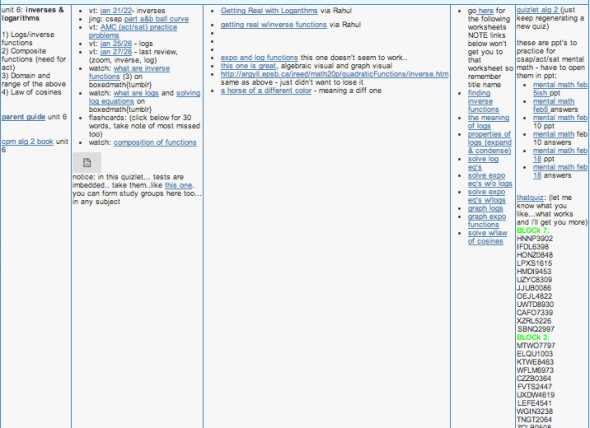 shortly after i copied the above images – i can’t seem to get onto that wikifoundry site anymore – i see it.. then in 2 seconds it goes to wikifoundry ads.. here’s the link: http://howtorunclass.wikifoundry.com/page/lessons+-+jings+and+voicethreads

but you can see most of it through jing link above.

perhaps the world of public/higher ed is currently in the mindset similar to our pilot math year. ie: realizing we can do better, yet assuming we have no choice about the compulsory-curriculum/common-core/college-career-ready ness piece.

while we’re waiting for that assumption to change, or assuming it never will, we carry on (ie: via ethics insight from Jane), and rather than jumping ship/mechanism, our safe/gradual approach is to attempt squeezing in both ends. (assumed basics & whimsy/curiosity)

and so – perhaps efficiency (ie: freeing up more time for whimsy/curiosity/grokking-what-matters.. while yet still checking off all the boxes) comes in the form of an editable syllabus, where mandates/basics are transparent and resource rich and editable/accessible/easily-crowdsourced from the get go. offering up time management to the individual/class. (ie: getting out of the way – ie: usefully preoccupied ness – yet still facilitating the assumed curriculum, which was in our case – pre ap alg 2.)

“This is a generation that has been ‘syllabused’ through their lives,” Artim said, referring… lnkd.in/bqykjKW