what gets you in

to college, to career .. to happiness, to health.. to love.

We’ve had an intense focus on grades/test scores/degrees/diplomas/paperwork – as a means to getting in places.

But all that is changing. People are waking up. And they are being shut out. [50% of people getting degrees are being hosed – meaning – the dream/promise is coming up false for 1/2 the graduates – via #dalelive closing panel.] They are finding/seeing the emptiness in the accolades. (accepted)

We need to wake up even more, to what employability means. What we would want for our own kids. 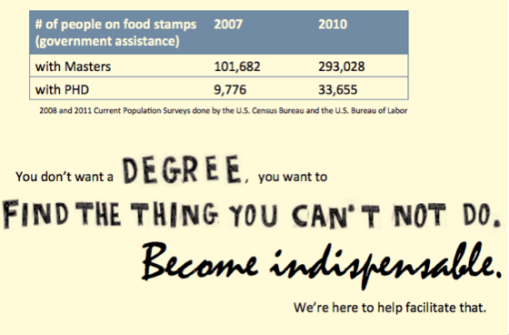 the trigger warning we need

To give you an idea of how hard-core the Juilliard School in New York is, when a world-class violinist recently gave a speech and performance, only fifteen students came, but every single practice room was booked solid.

Students here have more desire to practice the notes as written than they have to be coached by a master.

That’s because what got them into school was their ability to do the job of playing the music as written. What led to their acceptance to this famous institution was their skill in playing the notes, combined with a willingness to carefully follow instructions.

The dilemma is this: What got them in isn’t going to do them any good at all when they leave.

The world doesn’t have a shortage of very good violin players. There is no scarcity of obedient tympani players at established orchestras. They’re not hiring for those positions, and even if they were, supply far exceeds demand.

No, the only thing that will sustain these extraordinarily talented students going forward is going to be original art. Playing music in ways that no one expects. That’s a leap that they’ve been culturally encourage to avoid.

Perhaps we focus on what matters,

..worry less about getting in places (that most likely don’t exist, or even worse – that our ticket in is illegitimate).

is changing admissions – to a more holistic vantage point – and seeing benefits therein.

The results have been both uplifting and unexpected. …..faculty members have noted that students appear to be more collegial, supportive of one another, open to new ideas and perspectives and engaged in community activities

New report reveals that 50% of STEM jobs do not require a BA. Kids worried about $ should consider other options..

A credential, like any common currency, is valued only because of the collective agreement to assign it value.  The value of a college degree has been in question since the Great Recession, but there have yet to emerge clear alternatives for the public to rally the around.  There are plenty of contenders, though, and it won’t be long before one of them crystalizes the idea for the masses that the traditional degree is increasingly irrelevant in a world with immediate access to evaluative information.

Onlyness matters. You are the only one that can bring a unique gift/you to the table.

That’s really all you have to give.

That’s really all we want.

“And maybe the way life is, still, sometimes,” said Larry. “About wanting to be invited to things.”

a different mindset on what matters to getting in places..

fitting to our obsession with readiness (getting in ness) – our just in case ness:

Interesting read: 4 Things Employers Look For When They Google You #psd70 http://t.co/MY7Zhq3FBD

perhaps.. rather than spending so much time/energy on figuring out how to get in.. we should work on unpackaging us…

or this option.. no?

The political journalist Michael Kinsley has a saying about Washington, D.C.: “The scandal isn’t what’s illegal. The scandal is what’s legal.”

But the scam uncovered by Operation Varsity Blues involved at most a few dozen applicants over several years, not even enough to fill an Econ 101 lecture hall. The real scandal here is the idea that the American college admissions process, especially for the most selective schools, could ever be described as fair and transparent.

The very, very rich can all but buy their children’s way into a top school if they’re willing to spend a few million—and it’s all above board. The rich can provide all kinds of advantages to their children that will help boost a chance at admission—and it’s fine provided they don’t engage in outright deception and fraud. And the rest of us fight for what’s left and get angrier with every passing season.