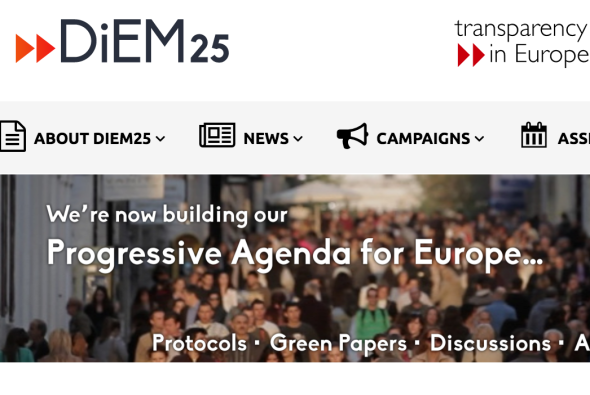 DiEM25 is a pan-European, cross-border movement of democrats.
We believe that the European Union is disintegrating. Europeans are losing their faith in the possibility of European solutions to European problems. At the same time as faith in the EU is waning, we see a rise of misanthropy, xenophobia and toxic nationalism.
If this development is not stopped, we fear a return to the 1930s. That is why we have come together despite our diverse political traditions – Green, radical left, liberal – in order to repair the EU. The EU needs to become a realm of shared prosperity, peace and solidarity for all Europeans. We must act quickly, before the EU disintegrates.

ie: hosting-life-bits via self-talk as data

adding page this day – via Yanis

Proud to reveal the list of those elected as #DiEM25 Coordinators & Advisors yanisvaroufakis.eu/2016/10/05/imp

The Democracy in Europe Movement 2025, or DiEM25, is a Pan-European political movement launched in 2015 by former Greek finance minister Yanis Varoufakis. The movement was officially presented at a ceremonial event held on 9 February 2016 in the Volksbühne theatre in Berlin. Their movement aims to reform the European Union’s existing institutions to create a “full-fledged democracy with a sovereign Parliament respecting national self-determination and sharing power with national Parliaments, regional assemblies and municipal councils”.

The movement’s declared aim is to reinvigorate the idea of Europe as a union of people governed with democratic consent rather than what the movement fears the European Union is heading to: a superstate ruled by technocrats issuing edicts. In support of this argument they mention eight distinct aspects where governance is by compulsion rather than consent. First among these is “hit-squad inspectorates and the Troika they formed together with unelected ‘technocrats’ from other international and European institutions”. The organization cites the emerging extremist nationalism of some new political parties as well as the so-called Brexit and Grexit state departure initiatives as evidence of this impending European fracture.

In a video statement Varoufakis ceded to El País during his visit to Madrid this claim was repeated, citing the Brexit special concessions granted by the EU to the UK in February 2016 as evidence of this disintegration

.@yanisvaroufakis outlines what we can learn from Remain’s failure, + proposes a roadmap for Brexit:https://t.co/RLzxrvt800 (video, 8m35s)

oct 2016 – How to revitalise progressive politics in Brexit Britain

to a people craving instant/immediate change.. we offered a worthy policy.. but a policy we needed to be in govt to implement..

it was not foolish of voters to vote for brexit.. they had reason.. lesson: unless we back up our views w/surge throughout country.. the people will turn to those who offer them realistic change now.. even if it is the wrong kind of change..

we can check out anytime.. but leaving is an utter mess

we must not turn against those who turned their back on us..

we should accept our responsibility for failure.. and convince them we can change..

reach beyond events right before our eyes.. which are shattering enough.. more than 4 000 drowned in med this yr

beyond crises of immigration.. ‘the fate of the hapless which we are exterminating’

contemporary scholarship is just beginning to portray the implications of the slave system.. horrifying

us was known as haven for european immigrants.. even w/in favored europe problems arose from beginning… first barrier was 1924 till 65.. consequences were dire particularly for jews.. 1938 – avion conf was a failed effort.. to deal with plights of jews.. the one enthusiast was hitler: ‘the world which has such deep hope for these criminals.. can convert to practical aid’… only dominican republic and costa rica were to offer help.. green light for genocide.. even after war when holocaust survivors still living in concentration camps.. no longer any question about hideous crimes.. the barriers were maintained.. tells us something about the western values that are coming to the fore again today..

one exception… by poorest countries is turkey..

part of motive for brexit seems to be to make record even worse..

we should never overlook fact that immigration crises today was a textbook ie of criminal aggression w/o any credible pretext..

ones caused it doing least.. ones who didn’t doing most.. to take care of people

gen attitude of western civ toward this history.. revealed in global planning at end of ww2.. careful plans laid how to org the world.. kissinger: ‘europe and others focus on regional.. while us will manage overall framework of order..’

pope: migrants in severe danger.. we should be devoting ourselves to remedying their plight.. in all many ways we can.. & reflecting on ..physician.. heal thyself..

remarkable comment on the media.. that they don’t comment on what trump ness is headed for.. calling for destruction of the species… he is calling for reducing tensions of russia and china which is huge (& clinton not doing)

when i asked how 50% in us could be for trump.. he answers.. look closer.. and tells of other places falling for demise.. back to us.. part is racism.. neoliberal programs cast aside large numbers of peoples.. ie: benefits/hopes decline.. one result has been contempt for institutions.. and collapse of centrous political parties.. not hard to find sources of these developments.. very serious.. facing very serious crises.. ie: immigrants.. global warming..

how can this be happening.. human species now facing questions never faced before.. on survival.. nothing said about it.. what does that tell you about the organ of info & analysis

the bernie sanders phenom was a very significant development.. for first time candidate came out ..almost unknown.. no corp funding.. no rich people funding.. developed quickly a mass/popular/young following..corbyn phenom in england.. somewhat similar..and these can last.. that’s the hope of the future.. very much alive

actions: 1\ some very easy for rich societies.. ie: if lebanon can accept to point where 40% are immigrants.. 2\ give vastly more humanitarian aid.. a small fraction of wealth of rich countries would suffice..  3\ look at sources of crises.. and ask.. a\ how are we responsible  b\ what can we do to ameliorate them..

if you don’t look at the roots of the problem.. the results will probably be something worse.. that’s been happening over and over for last 15 yrs…

reflexive action of west.. is to smash with violence..

if there is something somewhere that is unacceptable.. there has to be a moral responsibility that someone somewhere does not accept it – Rui Tavares @ruitavares

.@yanisvaroufakis: “We need to ‘europeanize’ solutions for problems who are impossible to solve on a national level” #END_TINA @DiEM25_IT

‘we must come up with immediate answers..

”we are not the citizens.. we are the inhabitants.. people at center’ – .’ – from Croatia

‘we are not the citizens.. we are the inhabitants.. people at center’ –  – from Naples

‘so many young people who seize abandon spaces and regenerate them..we believe this is the real popular wealth’ –

‘we have to come up with a common language/policy’ – #diem25

‘no use to talk about sovereignty in a globalized world’ – #DiEM25

‘when understand interconnectedness..makes you more afraid of hating than of dying’-B Thurman

‘diff ways of being engaged.. liberation from the policies of posterity/austerity’ – #DiEM25

‘cross out the bits you don’t like’ – @yanisvaroufakis #diem25

Congratulations to @DiEM25’s new coordinators!
Let’s make our movement stronger and advance on our journey to democratise #Europe!  https://t.co/kJhAhnqmv6 (http://twitter.com/MarcJAlmagro/status/901383741163143168?s=17)

Nothing threatens a country, a people, more than the sense that there is no alternative to a path leading nowhere..t

alt: as it could be

‘Mera’, after all, means ‘day’ or, in Latin, ‘diem’ and, thus, MeRA25 symbolises the links with DiEM25 and our new party’s Europeanist Internationalism.

all 7 urgent policies have to do w money.. can we imagine deeper..? ie: short bp

and toxic too.. that an alt can’t let go of money.. let go diem

facing a systemic crisis and one thing haven’t done is deal w it systematically..t

beth, a conversation between two trust fund babies (@bourgeoisalien) tweeted at 6:51 AM on Wed, Dec 05, 2018:
Everyone should be following @DiEM_25, the work they’re doing is in my estimation the most important work that must be done: bringing people together from all corners of the earth to fight the global oligarchy.
Please take a look at their work, it’s brilliant.
(https://twitter.com/bourgeoisalien/status/1070314690058838017?s=03)

Democracy Now! (@democracynow) tweeted at 6:05 AM – 5 Dec 2018 :
Also: We air an interview with Greek economist and author @yanisvaroufakis, who along with @SenSanders just launched “Progressive International,” a new movement to bring together a “global left” to counter rising authoritarianism. Watch 8-9AM ET: https://t.co/Xup8cdtnFB. https://t.co/Ah6ttULtPF (http://twitter.com/democracynow/status/1070303265424896000?s=17)

Shantanav Chakraborty (@shantanav_c) tweeted at 4:24 PM on Wed, Dec 05, 2018:
The launch of a Progressive International by @DiEM_25 cofounder @yanisvaroufakis and @BernieSanders is an event of extreme significance, one that is sure to reinvigorate the global left. It aims to challenge the neoliberal policies of the establishment … (1/3)
(https://twitter.com/shantanav_c/status/1070458853437960192?s=03)

Join us as we continue the fight to repair and democratise our Union with European Spring, the first-ever transnational electoral effort to bring a progressive, pan-European programme to ballots everywhere.

Srećko Horvat (@HorvatSrecko) tweeted at 4:51 AM – 28 May 2019 :
Now that the dust settled, it’s time for reflection and moving on in building the only true pan-European movement whose ambition is much higher than just a seat in (any) parliament. Join us for the third @DiEM_25 Academy in Lisbon this June! https://t.co/PgMGIy0uDn(http://twitter.com/HorvatSrecko/status/1133324926679699456?s=17)

what we need is a global movement that would make faction ness irrelevant.. by modeling a nother way to live.. that all-of-us crave.. (has to be all of us)

The reason we created DiEM25 is that the major crises in Europe require local and national action as well as pan-European, if not global, action. It makes no sense to prioritize the local and national over the transnational, or vice versa. We must operate simultaneously at all levels…t

to have a voice not of a Greek, a German, or a Spaniard, but of a European internationalist. We will continue to struggle to create a unified, coherent agenda for all of Europe.

for the globe.. nationality: human

(in forthcoming book – another now) I try to create a vision of a liberal, socialist society that is not based on private property but does use money as a vehicle for exchange and markets as coordinating devices. I preserve money and markets because the alternative would be to fall to some fearsome hierarchical control, which, for me, is a nightmare scenario.

rather.. money (any form of measuring/accounting) as the planned obsolescence

Open sourced solutions and networked teachers can act as a defense barrier to the coming invasive wave in Edtech.

With Greece languishing in our 11th year of depression, and the people of Turkey sinking into poverty, DiEM25’s proposal is the only way forward: An International-Regional Conference involving all countries of the E. Mediterranean to turn it into a sea of shared, green prosperity
Original Tweet: https://twitter.com/yanisvaroufakis/status/1293456220481826816

not the only way.. there’s a nother way

@yanisvaroufakis Another conference is the answer. Really?
Original Tweet: https://twitter.com/SbeattyStephen/status/1293457521714266113