other renderings of JIm:

The term was first used on May 25, 2008 by Jim Groom in his blog, and covered less than a week later in theChronicle of Higher Education. Stephen Downes, an online education theorist and an editor for the International Journal of Instructional Technology and Distance Learning, noted that “the concept of Edupunk has totally caught wind, spreading through the blogosphere like wildfire”.

Jim Groom is the Director of Teaching and Learning Technologies at the University of Mary Washington in Fredericksburg, Virginia. He has been working for over fifteen years in education with a consistent focus on the development of teaching and learning in higher education. In addition to extensive experience teaching at the college level, for the past seven years he has worked primarily in the field of instructional technology. Recent projects include an intercampus collaborative course known affectionately as ds106, a “massive” open online digital storytelling course that re-thinks the intersection of the humanities and online, distributed community-based learning experiences. He was also instrumental in the development of UMW Blogs, a multi-user blogging environment designed to provide an academic web-authoring solution to faculty and students that is flexible and open. Jim regularly blogs about edtech, film, literature, toys, and whatever else interests him at bavatuesdays.com.

let’s not talk about the crisis mode.. but about what’s possible.. 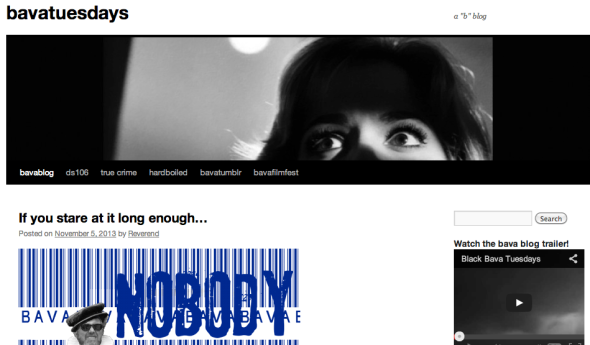 (that Bryan and many others hale as the best cmooc ever) 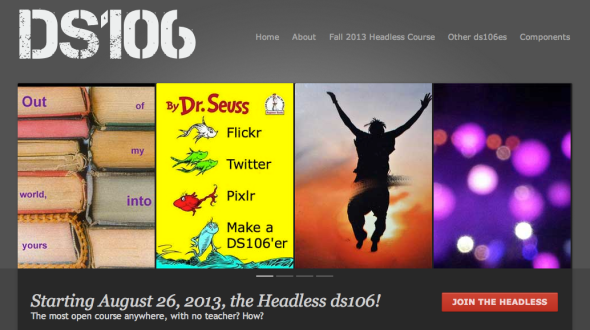 not only open – but via invitation…

get out of the lms and use the web to learn..

don’t lose yourself in any idea.. become a card carrying member of something that has outlived itself..

once you’re fishing around for credit – you have to learn to let it go..

ds106 – constantly reinventing itself.. not a pre-defined community – via Alan – fractal

it’s my inclination to control and keep it together… the web has taught me opposite..

breaking apart if a good thing..

which makes the whole idea of the mooc irrelevant to me in every possible way..

21 min – once you define the content in a course like that – ie: syllabus – it captures none of the relationships around that content.. and frames a relationship of power at that point..

why and how – rather than – here’s the content and what do you think about it..

if content was really the infrastructure.. then we don’t need schools… it’s about relationships..

Kitra‘s interview in amsterdam – on youth – craving the not fake..

a domain of one’s own:

not the course as access, but the community as access – Jim on revinventors panel on higher ed

@jimgroom Loving your thinking and process in this post. bavatuesdays.com/six-months-an-… // This is what building sustainable value sounds like.

And that, my friends, is the Personal API – https://t.co/Wm4ZYI3TMu

….I have to say the vision that continues to drive my own optimism and excitement around all this was best framed by Jon Udell in his talk “The Disruptive Nature of Technology.” For him it is not so much about hyperbole and over-promising—the defining elements of my work—but about a simple set of negotiations and data sharing that should be in place but aren’t. He’s very practical about it all, and frames it in a way that makes you re-think how we handle data period.

perhaps we simply – leave a trail – self talk as data – in whatever form we choose that day. as the day.

for us .. tech was always about access to the web… to me. i asked.. what would epitomize… jon udell‘s have you met (5 min wikipedia turoial)… him explaining how wikipedia acts… was one of the most profound ie’s for me of web 2.0 and how web as platform for creating socially could be.. for us.. (at mary washington) that was domain of one’s own… about alternatives in independence.. a basic fundamental element of literacy.. that could cross over every discipline..

or perhaps.. just life… no?

bryan asks – how do you see it going across discipline… jim: no doubt digital humanities is leading the charge..

domains shouldn’t be radical or an intervention.. should be part of the fabric of ed…. for me the reason to do it – hopefully people will blog again.. and comment on each others’ blogs..

web hosting – fill it with whatever you want… but undergirding.. open ed.. not  a resource package.. but an ongoing convo

the tools for the web are finally in your hands…

it’s not the technical but the metaphor.. servers as containers.. the poetry of our moment…

amazon in 2005-6 – bezo’s said going to create api for everyone.. that’s how amazon services were born – kin lane  – back as indie edtech…

not a generalized generic community system.. that was the lms/portfolio.. rather an ethos..

ethos – the characteristic spirit of a culture, era, or community as manifested in its beliefs and aspirations.

i’ve always defaulted to wp and twitter.. but whatever you are good with..

we’re at a point that we should be able to support various faculty doing various things..

rather – we’re at a point to support 7 billion people doing various things.. as the day… (not boxed in schools/unis/faculty/student/et al)

on the institution verifying its own existence.. the notion of the independent learner is at the heart of domain of one’s own..

but never independent learner… rather.. eudaomoniative learner.. ie: not following supposed to’s and package deals.. no?

@jimgroom
6/11/16 5:53 AM
New blog post: “Digital Dioramas” bavatuesdays.com/digital-dioram… #DWebSummit
The DNS domain system as it is currently setup is broken
The idea that everyone should have a domain for life.

how Cerf description of our current approach to web archiving as akin to creating a digital diorama: taking a two-dimensional snapshot, often by scraping sites.

@jimgroom
6/18/16 6:17 AM
For some this is good, but it does reinforce yr work on web is not necessarily #4life and your ‘re yr best archivisttwitter.com/ammienoot/stat…
[..]
@ammienoot: Thinking of my #OER16 chat with @jimgroom and this quote #BeebanKidron “If we don’t record our own history on the Net, it will disappear.”

@Downes
I’m with Jim Groom bavatuesdays.com/i-dont-need-pe… Why would this seem a good time to start drawing lines around open? it seems like fear mongering.

to define it in order to start controlling it,

..and that is often related to resources, grants, et

reconsolidates power for those who define it.

I don’t want to have a corner on open or ed-tech, I want something that gets me excited and passionate.  ..I would hate for an edict about what is and is not open pedagogy to

get in the way of people “coloring outside the lines”

of the 5Rs, to appropriate Brian Lamb’s gorgeous turn of phrase from one of this 3 tweets in response to the avalanche.

this may mean we have to move away from the term open because it has effectively been trademarked, and if that’s the case I am fine with that. EDUPUNK was long overdue for a resurgence