only lines that matter are the ones we draw ourselves..

2014 – (from youtube video above) Introducing NextLight™, Longmont’s community-owned fiber-optic network provided by Longmont Power & Communications. Over 100 years ago we began providing power and light to our community as a municipal electric utility. Now we are providing light that can carry gigabits of data in seconds, and can connect our community at the speed of light.

The Longmont City Council on Tuesday told Longmont Power & Communications that it could make an inter-departmental $7 million loan to cover NextLight construction costs.

The NextLight build-out project is funded by a $40.3 million bond the city issued in 2014, which will be paid back by NextLight ratepayers over time…..largely self-supported through rate revenues.

A feasibility study in 2013 predicted that in the areas of the city that have been through a full NextLight marketing study, 27 percent of households would opt to pay for NextLight internet.

Instead, LPC is seeing a take rate of 56 percent in those areas.

But that means that LPC needs more money for contractors, materials and other costs such as bandwidth, McGill told council.

If the council approves the $7 million appropriation, it would cause the Electric and Broadband Utility Fund to go below the required reserves for a period of time, Longmont Budget Manager Teresa Molloy and Utility Rate Analyst Brian McGill wrote in a memo to council.

Mayor Dennis Coombs said the city planned from the start to have to outlay cash in order to fund the NextLight infrastructure project and then recoup that money from ratepayers over time.

“We predicted we wouldn’t have positive cash flow at this point anyway. We’re building out 50 percent more and it’s only costing us 17 percent more. I think that’s a good news story we should be proud of,” Coombs said.

The vote on first reading passed 6-1 with Peck dissenting. The issue will come back on second reading.

perhaps we leap instead – for (blank)’s sake…

With crews working in five of the six city sectors, LPC spokesman Scott Rochat said it’s a difficult question to answer because each neighborhood, or even each block, can present different challenges to construction crews.

sw longmont..started construction in August 2014, and crews were able to connect the first homes to the network in November 2014

Phase 5, in the northwestern corner of the city, was originally scheduled to begin construction in December but began instead in early January due to troublesome winter weather in mid-December, Rochat said. 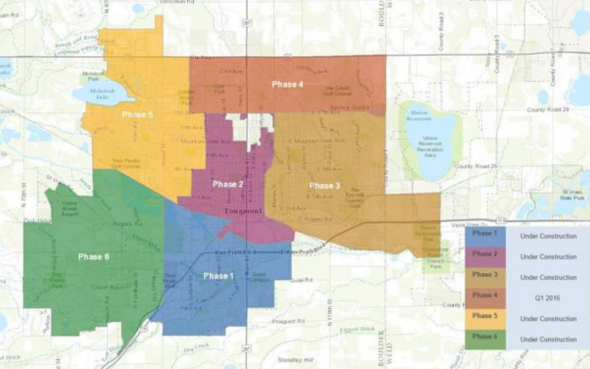 Designed to spread NextLight around the city quickly, residential customers who sign up in the first three months the service is available in their area receive a charter member price of $50 per month for the fastest speed. If the customer moves, the charter membership price transfers to their new address and transfers to the buyer of their former home.

ecause NextLight uses fiber-optic cable to transmit data, users could theoretically download and upload data at a rate of 1,000 megabits per second (or one gigabit), although that varies based on hardware and other factors.

love to *bend ear about potential for next light.. for potential of human energy in longmont

In February, Roiniotis announced LPC was hiring more install crews to cut down on wait time for a connection in the initial launch area of 500 homes and the expanded area of roughly 1,400 homes later.

“It’s going to continue to significantly improve as more and more of our community gets the NextLight service, and that will have an affect on Colorado’s average,” Roiniotis said.

“One of the reasons we’re doing this project is to strengthen us from an economic development perspective,” Roiniotis said. “There are people who access this (Ookla) information when deciding where to locate.”

People living just outside the city limits cannot sign up for the service because Longmont can only serve its residents. Now, two cities, Chattanooga, Tenn., and Wilson, N.C. have petitioned the FCC to overturn state laws blocking them from expanding their services to neighboring communities.

like asking xfinity/comcast to let rp be one fam/unit.. we’re missing the commons because not all are allowed in for the common ing

ie: hosting life bits via self talk as data

Additionally, Rochat added that the speeds that a NextLight customer can get out of the service depends on why type of equipment, such as an Ethernet card, cable or wireless router, they use.

“We give them a big pipe, but the size of the ‘faucet’ that a customer attaches to that pipe makes a difference,” Rochat wrote. “As people get more and more savvy about what sorts of gear work best with a gigabit connection, their speeds and our average speed should go up.”

the bending of the ear ness

ie: hosting-life-bits via self-talk as data

if one were to prototype a means for 7bn people to leap to a nother way to live..via a mech to facilitate their daily whimsy/curiosity.. thru some common connectivity/wifi..
what might you recommend for that connectivity..?

my current wondering/thinking.. of where to tap/hack:
1/ something like comcast/xfinity.. because many in potential space (115 units) already using it.. but too expensive.. but if could get xfinity to treat entire complex as one unit. reducing each of 115 units pay for just wifi to $10/mo
2/ potential unit already wired for nextlight.. but process stopped there
http://www.longmontcolorado.gov/departments/departments-e-m/longmont-power-communications/broadband-service
3/ some other type of hack in your brilliant mind

it’s got to be cheap/smart enough infrastructure..and/or via co w means/money and willingness to hack prototype.. so that potential is there to leap anywhere.. today.. ie: detroit, kampala, syria,…any/all refugee camps.. et al

1. You might be able to negotiate a deal with comcast for the building to pay 1 bill and then the building would manage/maintain the distribution of Internet to each individual apartment. However the costs of setting up and maintaining internet for each person may be more than expected.

2. Longmonts power grid also delivering Internet is a lot like what went down in Chattanooga Tennesee: http://chattanoogagig.com/
Only in Chattanooga, Tennessee is 1 Gigabit-per-second Internet speed available to every home and business – over 150,000 of them – throughout the entire community. Urban or rural, business or residence, Internet speeds that are unsurpassed in the Western Hemisphere – from 50 Megabits-per-second all the way up to one gigabit-per-second are accessible here. Today.
[..]
, fiber is powering smart investment by attracting creative entrepreneurs who are eager to explore what is possible with so much bandwidth. In 2012, they are launching Lamp Post Lab, bringing bright undergraduates from around the country together to explore what can be built using the world’s fastest Internet

https://twitter.com/ChattanoogaGig
mayor – https://twitter.com/AndyBerke
“The next chapter of the Chattanooga story is waiting to be written. All of us here have the power to write it together.” #Berke2017
imagine that as literal.. @AndyBerke ie: host life bits have to free people if you want to see them dance

so .. truly a chicken and egg scenario.. need the connection.. need the people free to figure… to use it.. to solve problems.. to make it a common ing thing..

3. Internet access, and access to it, is not a technological problem. It’s a policy problem. Unless telcos are treated like the utilities they are and universal access is codified in law there will always be a digital divide because it’s not cost effective to bring Internet everywhere.

one more question then.. if you were in a space that was policy free (meaning you make it how you see fit) do you know of a means to bring internet everywhere that would leave least footprint

most efficient with least use of resources.. or at least least invasive.. something you could sustain
like i could be all wet.. but i see something like blockchain (used completely diff than people are describing it today) – as a means to free up our earth from server farms..

blockchain is about decentralizing the content on the internet
i don’t see it working particularly well, but what do I know.
blockchain wont do anything for connectivity, but the closest corollary for connectivity is mesh networks
which are somewhat more decentralized than typical internet access, except they don’t work very well

right. i was using blockchain as an analogy.. of something .. not yet being used right.. but that could prove to be more sustainable.. earth/people friendly
for that to happen.. blockchain needs internet
*disclaimer: