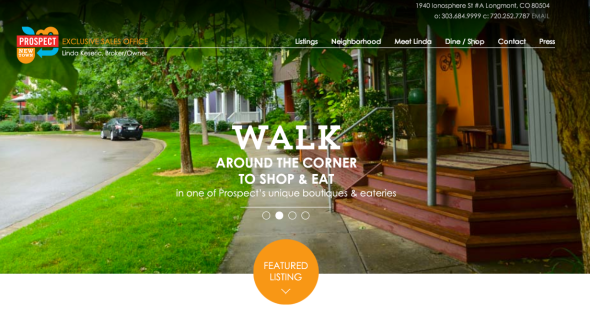 Prospect — Colorado’s first New Urbanist community — is located on an 80-acre tree farm in the Front Range city of Longmont. When Prospect’s developer, Kiki Wallace, bought the farm from his family, his goal was to build a distinctive project which would minimize negative impacts on the land. He hired the firm of Duany Plater-Zyberk (DPZ), the internationally recognized planners of Seaside (Florida) and Kentlands (Maryland) to give form to his vision. The result is a uniquely livable blend of traditional and modern planning concepts, built out in a broad range of architectural styles.

The New Urbanist planning movement proposes an antidote to conventional and sprawling suburban development, which is characterized by oversized front yards; wide, featureless streets; and inhospitable house fronts dominated by huge garage doors. Prospect, in common with other New Urbanist communities, instead features narrow tree-lined streets connecting homes to numerous parks and public amenities, shops and offices. Home types include detached houses, townhouses, courtyard houses, apartments, and live/work lofts. Mature trees have been planted along Prospect’s streets and in its parks to provide the shade and privacy typical of an established community.

The neighborhood, now in its fourth phase of development, will eventually have up to 585 units on 340 lots. A large community park surrounded by shops, a swimming pool, restaurants and offices comprise the town center — and all of this is within a five minute walk from Prospect’s homes.

In 1996 Prospect won a Governor’s Smart Growth Award for its innovative alternative to suburban sprawl. In addition, numerous articles have been written about the community documenting its growth and success.

it’s like a Jacobs (w/o old bldgs? does johnsons count?)/Baan/Cruz/Malka potential/prospect..?

Prospect New Town is a New Urbanist housing development located on the southern edge of the city of Longmont inBoulder County, Colorado in the United States. The first full-scale new urbanist new development in Colorado, it was developed starting in the mid-1990s by Kiki Wallace and designed by the firm of Duany Plater Zyberk & Company, who also designed the new urbanist communities of Seaside, Florida and Kentlands in Gaithersburg, Maryland. As of 2009, the project is in its sixth phase of development. It is intended to have a population of approximately 2,000 people in 585 units on 340 lots.

In October 1995 the Longmont Planning Board granted the appropriate variances and unanimously approved the project, on the grounds that “this is what people want.”[3]. The project was strongly backed by Longmont mayor Leona Stoecker.

perhaps rat park ness with Scott in prospect or ?

An increasing number of US landowners want to build commune-style villages that are completely self-sufficient https://t.co/76rqQ55L0i #eco

[last time i looked.. at another space.. it was 1350 and which included utilities and next light..]