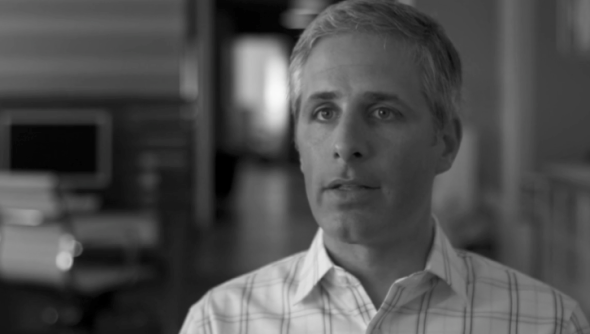 see him 1st – really – in internet’s own boy. see his tweets focus on christie.. et al. is he in denver..talking real systemic change in 2006 – as govt funding of elections..

from internet’s own boy:

1:05:30 – it would be easier to understand the obama admin’s posture of supposedly being for deterrence if this was an admin that for instance – prosecuted arguably the biggest economic crime that this country has seen in the last 100 years, the crimes that were committed that led to the financial crisis on wall street..when you start deploying the non-controversial idea of deterrence only selectively you stop making a dispassionate analysis of lawbreaking and you start deciding to deploy law enforcement resources specifically on the basis of political ideology – David Sirota – and that’s not just undemocratic.. it’s supposed to be unamerican

1:12 – David Sirota – the ones where all the money/corps are on one side and all the people are on the other

have his books on recommend

2006 on colbert report about his book, hostile takeover:

2008 on colbert report about his book, the uprising:

the uprising is not about any  candidate

the change happens all over the place

David J. Sirota (born November 2, 1975) is an American political commentator and radio host based in Denver. He is a nationally syndicated newspaper columnist, Democratic political spokesperson, and blogger.

interesting story on Emily running for dps board in 2011

This is a slightly older article, but I just read it and it blew my friggin’ face off — and so you gotta read it. It’s about how psychological depression has set in among many climate scientists about the prospects for human survival — and also about the backlash they face every time they try to sound the alarm about how carbon emissions may be dooming future generations to either a dystopian existence, or extinction. I have young kids — since reading this article, every time I look at them I feel horrible about what this climate change denying society of ours is doing to them. I’m also *thinking hard about what I can do in my own life to contribute to a solution.

david.. *thinking hard about what I can do in my own life to contribute to a solution.

As for the TYT gig, you probably know that TYT’s video channel has more than 3.2 million subscribers. I’ll be joining the team as a news analyst and regulatory contributor. I will also be continuing my investigative journalism for Newsweek/IBT, and I’ll be bringing some of that reporting to TYT’s video platform.

You can read more about TYT’s growth and my new job in Ad Week, The Hill, Politico andVariety. I was hired after they crowdfunded $1.5 million to build out their reporting team. I’ll be coming to the network along with former MSNBC producer Jonathan Larsen, former MSNBC host Dylan Ratigan, Huffington Post D.C. bureau chief Ryan Grim and New York Daily News columnist Shaun King.

As I said — this is one of two changes I’ll be making this Spring to expand my work. In the coming weeks, I’ll be asking for your help on another exciting journalism project that I’ll be heading up.

P.S. If you’re interested, here’s an interview I did with TYT founder Cenk Uygur about journalism, politics and my childhood growing up as Philly’s most rabid Sixers/Charles Barkley fan.

9 min – sports fans ness ends.. starts in on political history ness ie: worked for bernie sanders as press secretary – but just because sent resume into a bin… learned so much.. 90s.. was 24.. insider view from guy who gets corruption of outside..

14 min – on bernie having universal name id.. i’ve not worked w anyone else like that.. yet.. goes to mtg of 16 people in snowstorm..

15 min – he’s so driven.. and i can still almost complete senstences.. he’s saying same thing.. he knows what he’s about.. and hasn’t really deviated from that..

16 min – his time and time for his politics has arrived..

17 min – your sense of populism: after capital hill work..

hostile takeover (2007): on not having to buy a vote w cash in an envelope.. all about the terms of the debate.. how we talk about things are rigged against what the vast majority of americans.. that polls tell us want.. it rigs a debate in a way that creates outcomes that serve the wealthy and the powerful

the uprising (2009): about populism on both sides

back to our future (2011): how 80s pop culture has infused our politics

..people party getting bigger/stronger.. but don’t fool yourself into thinking that the money party is weakened.. it’s weaker.. but it is certainly the dominate force..

..in our politics.. and that’s been the thrust of my reporting.. to spotlight and show how money almost always dictates the terms of the debate and what’s really going on

making up money.. money as os

why independent media.. legacy media writes money almost completely out of the story..

..it’s all about the personal intrigue.. gossip.. gamesmanship.. and ..

.. that is not often part of the story.. i will say this as one asterik.. the one part of the media where you do see some of that consistently.. is in the business press.. they don’t cover from an ideological perspective.. and there’s not much of a political analysis..  but you see more of it in places like business week and wsj because those publications are written for people who care for nothing other than making money… because trying to bet on it in a certain way to make money..

..so a bit in business news.. not any in political legacy media.. so independent media is only place where you can do that and cover it in a serious way

24 min – in many cases.. they are proxies for their donors..

26 min – value in being right even if you’re alone:

very little recognition for being right too early

..my hope is that we’re moving toward a situation in which there’s at least an independent media infrastructure.. that we can get to the reality.. and expose the reality..

..in a lot *more serious/consistent/profound way

..than we’ve been able to in the past.. when there weren’t these avenues . . to actually have an independent audience.. and independent media

Statement of the obvious: when you have children, major career/job decisions can become especially terrifying.

David Sirota (@davidsirota) tweeted at 7:53 AM on Tue, Feb 06, 2018:
I am resigning from IBT/Newsweek. I am proud of my nearly 4 years there, producing serious award-winning investigative journalism under extremely difficult circumstances. I will now be looking for a new opportunity to continue this work. l hope I’ll find it. Thanks to all.
(https://twitter.com/davidsirota/status/960889105134448642?ref_src=twcamp%5Eshare%7Ctwsrc%5Eandroid%7Ctwgr%5Egmail%7Ctwcon%5E7090%7Ctwterm%5E0)

continue your work  there..