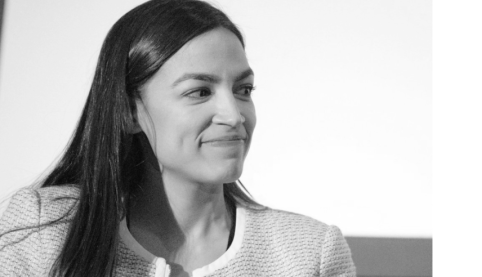 so popular and all over the news.. great at poking at the rules.. yet still seems focused on causes – as i’m sure it has to be in public politics.. but adding this day

“We should be excited about automation, because what it could potentially mean is more time educating ourselves, more time creating art, more time investing in and investigating the sciences, more time focused on invention, more time going to space, more time enjoying the world that we live in,” she said. “Because not all creativity needs to be bonded by wage.”

no human should be bonded by wage..

Ocasio-Cortez didn’t put forward *a specific plan for dealing with automation at SXSW. But her answer placed it in the familiar context of a larger fight against economic inequality and corporate greed. “We should be working the least amount we’ve ever worked, if we were actually paid based on how much wealth we were producing,” she said. “But we’re not. We’re paid on how little we’re desperate enough to accept. And then the rest is skimmed off and given to a billionaire.”

let’s try this: 2 convers as infra

and to ge tthere.. truly get there and stay there.. begs a mech that listens to every voice .. every day.. tech as it could be

has to be everyone.. or it won’t work

Alexandria Ocasio-Cortez (@AOC) tweeted at 5:41 PM – 14 Mar 2019 :
GOP challenged me in committee, betting on an assumption that I didn’t know what I was talking about.
Spoiler: I knew what I was talking about.
Keep believing the patronizing trope about “not smart, but her heart’s in the right place.”
Makes em underprepare &not see us coming.https://t.co/ykqfEZ4NWR (http://twitter.com/AOC/status/1106339612514021381?s=17)

What if we actually pulled off a #GreenNewDeal? What would the future look like? The Intercept presents a film narrated and co-written by Rep. @AOC and illustrated by @mollycrabapple. https://t.co/zAMLAizbN7https://t.co/PywCR0jPUl
Original Tweet: https://twitter.com/theintercept/status/1118517713322823682

we can be whatever we have the courage to see

let’s go deeper than green new deal.. as it could be..

today.. we have the means to go deep enough

It is vital that we imagine better realities for ourselves

let’s be that courageous

from knock down the house (doc):

on too much ness

we cannot accept anything less than an opp to save ourselves.. and that’s what it is..  and we have every possibility in the world to change it

facil daily curiosity  ie: cure ios city.. via 2 convers as infra..  tech as it could be..

Yesterday @AOC went live on IG and I got a question in. Her answer is beautiful. Watch/read and give yourself some space to be less productive and more human. Love yall! #coronavirus #covid19 #stayhuman https://t.co/hoyRX64gz1

2 min – it’s kind of a function of capitalism.. that we measure people’s worth in their work productivity.. not in their full worthiness as a human being..t

askew unconditional law: we belong without condition.. for without this we are always fighting to be enough.. and under this circumstance there is no peace.. – Nic Askew

3 min – take this opp to reassess that..

4 min – symptoms of that .. we treat emotional labor less.. undervalued.. because that emotional/social labor is invisible and difficult to measure..t

give people space to be a human being.. rules of econ are to grind people down to work productivity and not human value..t

norton productivity law: it takes getting nothing done to make us human again – Quinn Norton

The term “cancel culture” comes from entitlement – as though the person complaining has the right to a large, captive audience,&amp; one is a victim if people choose to tune them out.

what we need is a means to undo our hierarchical listening

4 min – not about one man/incident.. about a pattern of de humanization of others

what we need is a means/mech to undo our hierarchical listening ie: 2 convers as infra

She also says, amazingly, that she is often not sure she wants to stay in politics — primarily because of cowardly, anonymous attacks (my characterization) from within her own Party, which often treats her as its enemy, someone to be banished: https://t.co/GGriZUUvGf
Original Tweet: https://twitter.com/ggreenwald/status/1325444995990614016

odds of me running for higher office and odds of me going off and trying to start a homestead somewhere.. they’re probably the same

@AOC: “Wednesday was an extremely traumatizing event. And it was not an exaggeration to say that many members of the House were nearly assassinated.”

AOC also says that she didn’t feel safe going to the safe room and sheltering with other members of Congress, because she felt some of them might disclose her location to rioters and put her in danger.
Original Tweet: https://twitter.com/emmaladyrose/status/1349204101461139457

Congresswoman for NY-14 (Bronx + Queens). In a modern, moral, + wealthy society, no American should be too poor to live. 100% People-Funded, no corporate PAC $

Alexandria Ocasio-Cortez (/oʊˌkɑːsioʊ kɔːrˈtɛz/; Spanish: [oˈkasjo koɾˈtes]; born October 13, 1989), also known by her initials, AOC, is an American politician and activist. A member of the Democratic Party, she has been the U.S. Representative for New York’s 14th congressional district since January 3, 2019. The district includes the eastern part of The Bronx and portions of north-central Queens in New York City.

On June 26, 2018, Ocasio-Cortez drew national recognition when she won the Democratic Party’s primary election for New York’s 14th congressional district, defeating the ten-term incumbent Congressman, Democratic Caucus Chair Joe Crowley, in what was widely seen as the biggest upset victory in the 2018 midterm election primaries. She beat Republican opponent Anthony Pappas in the November 6, 2018, general election, and at age 29, became the youngest woman ever to serve in the United States Congress. Ocasio-Cortez is noted for her unusual social media presence for a freshman congress member, such as her usage of Twitter and Instagram.

Ocasio-Cortez is a member of the Democratic Socialists of America. Ocasio-Cortez and Rashida Tlaib are the first two members of the group in Congress. She advocates for a progressive platform that includes Medicare For All, a federal jobs guarantee, a proposed Green New Deal, abolishing U.S. Immigration and Customs Enforcement, free public college and trade school, and a 70% marginal tax rate for incomes above $10 million. Before running for Congress, she served as an educational director for the 2017 Northeast Collegiate World Series for the National Hispanic Institute. Ocasio-Cortez majored in international relations and economics at Boston University, graduating cum laude in 2011.

Ocasio-Cortez has family in Puerto Rico, where her grandfather lived in a nursing home before dying in the aftermath of Hurricane Maria. After Ocasio-Cortez’s father’s death in 2008, her mother and grandmother relocated to Florida due to financial hardship. She identifies as Catholic and described her faith and its impact on her life and campaign for criminal justice reform in an article in America, the magazine of the Jesuit order in the United States. Ocasio-Cortez said that she has Sephardic Jewish ancestry, although she does not practice the faith. She has said “to be Puerto Rican is to be the descendant of… African Moors [and] slaves, Taino Indians, Spanish colonizers, Jewish refugees, and likely others. We are all of these things and something else all at once—we are Boricua.”

During the 2018 election campaign, Ocasio-Cortez resided in Parkchester, Bronx with her boyfriend, Riley Roberts.