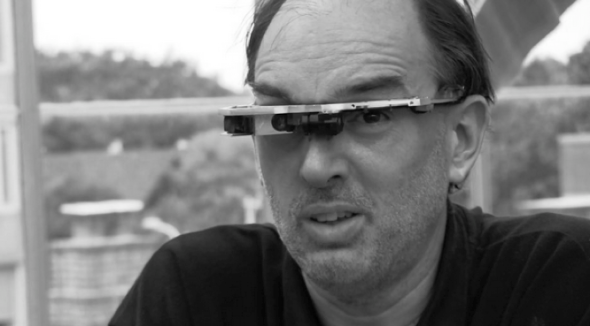 first intro’d to Alex here (much thanks to Jeff Lebow):

Mann also formalized the concept of McVeillance as placing people under surveillance while simultaneously forbidding them from using their own cameras. More precisely, McVeillance was defined as the ratio (linearly) or difference (logarithmically) of surveillance to sousveillance.

lifelogging – writing about your life

surveillance – looking down from above

where Steve Mann and Marvin Minsky and Ray Kurzweil are speaking together.

mann, in his own words ‘developed a dependence on the apparatus.. has found it difficult to function normally on the few occasions he has been forcibly prevented from accessing his array of devices… (has worn  since mid 1980s

objection could be made that this is always already the case.. for all of us: that some nontrivial art of everything that make us what we are lives outside of us, in the world, and that mann’s situation is only different in that much of his outboard being subsists in a single, self-designed apparatus..

more worrisome.. it’s precisely because mann develop and continues to manage his own mediation equipment that he can balance his dependency on it with the relative freedom of action enjoyed by someone who for the most part is able to determine the parameters under which that equipment operates.

if steve mann has become  radically hybridized consciousness, in other words, at least he has a legit claim to ownership and control over all the places where that consciousness is instantiated..

ownership not key.. deciding what data is .. is key.. ie: ability/freedom to let self-talk be data.. via whatever you choose to convo ..however you choose communicate.. as the day [aka: not part\ial.. for (blank)’s sake…].. gershenfeld sel huge – or won’t work – has to be all of us

what does our immersion in the interface do to our sense of being in public, tat state of being copresent with and available to other that teaches us how to live together, and ultimately furnishes the metropolis with its highest and best justification

but mann seems to say he sees it making him more present..

what discourse around ar shares w other contemp narratives.. is a frustration  w limits of the flesh.. and a frank interest in transcending them thru tech means

or perhaps.. limits of intoxicated flesh.. flesh sans turtle shell.. and how to get us back to indigenous us

first steps toward the fulfillment of a deeper promise: that of becoming-cyborg