district people get the benefit of:

visions of such spaces:

(via Matt Hern‘s Everywhere All the Time: A New Deschooling Reader):

After four years of shoestring budgets and overcrowding, a group of parents successfully lobbied the School Board to finance the school as a special program within an existing elementary school. – p. 169

A space where there are many people doing things they love to do – painting, reading, tinkering with Chemistry, building electrical circuits, cooking, gardening etc.   Others are encouraged to come along side them and learn from them or work on their own projects and be able to ask questions of someone who knows.  If a young person arrives who wants to understand math so he can get into a certain college course, someone is available to help – and perhaps there are 6 other young people who want to join them.    The benefits of this model include engaged students who are learning when they are the very most motivated to learn – “just in time learning”, teachers who get to teach without the stress of classroom management and forcing a curriculum that doesn’t resonate with his students.  It would provide a positive alternative to those who are disenfranchised with the current system – they will continue to learn and teach – their talents won’t be wasted or lost – they won’t turn to destructive behaviors because they will have a voice and a real opportunity to be productive and do something that matters.  They won’t get ulcers, become depressed, or hurt themselves or others because they are so stressed from being force through a system that doesn’t meet their needs.

Other benefits – building of relationships, the ability for young people to see many different pursuits and have the ability to try out many different things which would improve their chances of finding their talents earlier – The more people in our communities doing what they are really good at will make our communities happier, healthier and absolutely outstanding. 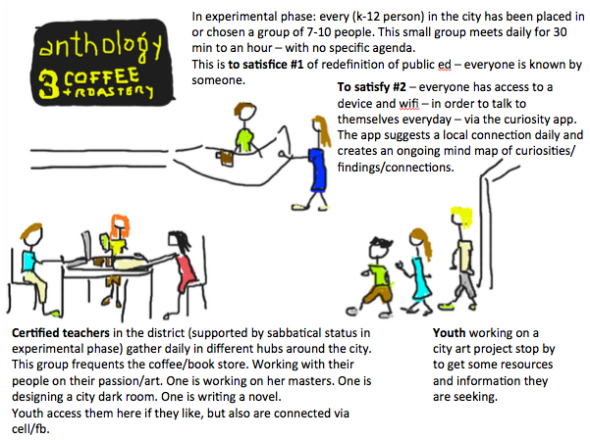 the money we’d save:

via a global/nationwide social bill we keep supporting (health, et al, would be in the trillions):

I want you to consider the frightening possibility that we are spending far too much money on schooling, no too little. I want you to consider that we have too many people employed in interfering with the way children grow up – and that all this money and all these people, all the time we take out of children’s lives and away from their homes and families and neighborhoods and private explorations gets in the way of education.

I heard a VP of IBM tell an audience of people assembled to redesign the process of teacher certification that in his opinion this country become computer-literate by self-teaching, not through an action of schools. He said 45 million people were comfortable with computers who had learned through dozens of non-systematic strategies, none of them very formal; if schools had preempted the right to teach computers use we would be in a horrible mess right now instead of leading the world in this literacy.

The reason Swedes have wiped out what would be 1st and 2nd grades, is that they don’t want to pay the large social bill that quickly comes due when boys and girls are ripped away from their best teachers at home too early. It isn’t worth the price, say the Swedes, to provide jobs for teachers and therapists if the result is sick, incomplete kids who can’t be put back together again very easily. The entire Swedish school sequence isn’t 12 years, it’s  9. The direct savings of such a step in the U.S. would be $75-100 billion.

a way for people who choose to homeschool/unschool/drop out/in to get funding? to get asylum as it were – a city with no raised eyebrows.

in reading Matt Hern’s everywhere all the time.. it’s blowing me away how much injustice we are doing people.
we are forcing compliance, and if you don’t comply – you no longer get benefits of govt funding. yet – you continue to pay for others’ forced compliance.
in the book – the story of Mary Leue is shared, who founded the Albany Free School in 1969.
it originated with her dealing with her five kids, one in particular, who didn’t want to go to school, so she started teaching him at home. soon after got a threatening call from her principal, so she checked on the legality. she found Joe Markham, who was then in the curriculum department of the State Education Department, he told her that her decision was legal and offered to give state guidelines to any school official who hassled her. so when the truant officer called Mary, and began issuing all sorts of final warnings, Mary calmly gave him the Joe’s name. not long after, the truancy officer, called to apologize and offer assistance.
we need another Joe Markham. we now need to find a means that homeschoolers, unschoolers, and dropouts and depressed and awakened people…  – rightfully – get funding.
we are not offering any support for legitimate learners.
you play the government game – or – not only are you on your own, you keep paying into the pot – with no returns to you.
maybe our Joe Markham is Mike Donnelly – hslda attorney