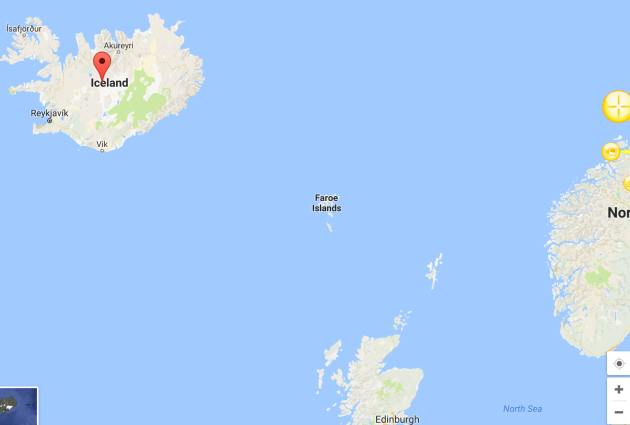 The Republic of Iceland (/ˈaɪslænd/; Icelandic: Ísland [ˈistlant]), Lýðveldið Ísland in Icelandic, is a Nordic island country in the North Atlantic Ocean. It has a population of 332,529 and an area of 103,000 km2 (40,000 sq mi), making it the most sparsely populated country in Europe. The capital and largest city is Reykjavík. Reykjavík and the surrounding areas in the southwest of the country are home to over two-thirds of the population. Iceland is volcanically and geologically active. The interior consists of a plateau characterised by sand and lava fields, mountains and glaciers, while many glacial rivers flow to the sea through the lowlands. Iceland is warmed by the Gulf Stream and has a temperate climate, despite a high latitude just outside the Arctic Circle. Its high latitude and marine influence still keeps summers chilly, with most of the archipelago having a tundra climate.

According to Landnámabók, the settlement of Iceland began in the year 874 CE when the Norwegian chieftain Ingólfr Arnarson became the first permanent settler on the island. In the following centuries, Norwegians, and to a lesser extent other Scandinavians, immigrated to Iceland, bringing with them thralls of Gaelic origin. The island was governed as an independent commonwealth under the Althing, one of the world’s oldest functioning legislative assemblies. Following a period of civil strife, Iceland acceded to Norwegian rule in the 13th century. In 1814, it came under the rule of Denmark, during which a distinct Icelandic national identity emerged. This culminated in independence in 1918 and the founding of a republic in 1944. Until the 20th century, Iceland relied largely on subsistence fishing and agriculture, and was among the poorest in Europe. Industrialisation of the fisheries and Marshall Plan aid following World War II brought prosperity, and Iceland became one of the wealthiest and most developed nations in the world. In 1994, it became a part of the European Economic Area, which further diversified the economy into sectors such as finance, biotechnology, and manufacturing.

Iceland has a market economy with relatively low taxes compared to other OECD countries. It maintains a Nordic social welfare system that provides universal health care and tertiary education for its citizens. Iceland ranks high in economic, political and social stability and equality. In 2013, it was ranked as the 13th most-developed country in the world by the United Nations’ Human Development Index. Iceland runs almost completely on renewable energy. Affected by the ongoing worldwide financial crisis, the nation’s entire banking system systemically failed in October 2008, leading to a severe depression, substantial political unrest, the Ice save dispute, and the institution of capital controls. Many bankers were jailed, and the economy has made a significant recovery, in large part due to a surge in tourism.

Icelandic culture is founded upon the nation’s Scandinavian heritage. Most Icelanders are descendants of Germanic and Gaelic settlers. Icelandic, a North Germanic language, is descended from Old Norse and is closely related to Faroese and West Norwegian dialects. The country’s cultural heritage includes traditional Icelandic cuisine, Icelandic literature and medieval sagas. Iceland has the smallest population of any NATO member and is the only one with no standing army, its lightly armed coast guard being in charge of defence.

so many times thought to add page (pirate party.. women pres talks..women working % of day.).. (maybe add later.. chip/whatever would have already.. but no chip so manual.. and.. people are dying)..but not adding till this day

“In Iceland the crowd-sourced constitution contains a provision for citizen-led initiatives to propose and alter legislation. So the great promise of this next phase in Iceland’s politics is not simply a social democratic consensus around financial and industrial regulation and human rights, but also an attempt to redress the balance of power between citizens and government. Beyond being given a chance to help write the constitution or to vote every few years, the people are being given the chance to remain constantly involved in the shaping of the rules that govern their society.

This is a vital lesson for any country where people feel disconnected from their institutions of government. What does it mean to “take back control”, as the popular Brexit refrain went? Control from whom? And where? What Iceland and the Occupy movement show us is that the question of who governs is not simply a matter of national sovereignty vs supranational institutions. It runs far, far deeper.”

What Iceland and the Occupy movement show us is that the question of who governs is not simply a matter of national sovereignty vs supranational institutions. It runs far, far deeper.

as i just read – we are orphans (refugee camp).. just watching black panthers.. e privacy laws to save our security.. wartorn.. suicides.. syrian.. and a kazillion other injustices/crazinesses in the world..

It looks as though a crowd-sourced constitution, developed in 2012, could finally be about to make its way through parliament.

The soul-searching prompted by the economic crash offered a chance to reassess what Icelandic society stands for and provides the perfect moment to change the way the country operates. This existential reimagining is the heart of the constitution and cannot be underestimated.

and it comes to.. writing something up in 2012.. waiting for it to get approved.. when i’m guessing.. it’s like stuvoice is.. not really voice.. just defense of way things are.. lacking of our deep imaginations.. that can free us…

this isn’t existential reimagining .. via a constitution..? rather.. it’s an ongoing on-hold ness… and it’s killing us..

For radical politics, legitimacy comes not simply through single-shot participation, such as through elections, but through a continued involvement in “constitutionalising” – in the processes of rule-making and defining the identity or ethos of a particular community.

well. not really.. and that’s not what we want..anyway.. not our souls..

They represent the agreement of a single set of principles and associated rules. But once these are decided on, they are often fixed

It is the *radically participatory nature of the Icelandic process that makes it interesting to anarchists like us. For anarchists, constitutionalising is not about finding one way to manage all social orders *but of finding ways to ensure that people can propose radical change that does not lead to the domination of others. This demands active participation in making the rules by which we would like to be governed.

again.. *stuvoice ness… doesn’t matter how radically participative you are in

**that’s a stupid defense mode.. we should stop that..

Across almost all the Occupy camps, run in large part by anarchists, *this continual participation was realised through open forums called General Assemblies. These were shaped almost entirely through consensus decision-making procedures. Rules were agreed that facilitated collective decisions and the people most often left out of these processes in mainstream politics were given a voice.

*so voluntary compliance.. not us

In Iceland the *crowd-sourced constitution contains a provision for citizen-led initiatives to propose and alter legislation. So the great promise of this next phase in Iceland’s politics is not simply a social democratic consensus around financial and industrial regulation and human rights, but also an attempt to redress the balance of power between citizens and government. Beyond being given a chance to help write the constitution or to vote every few years, **the people are being given the chance to remain constantly involved in the shaping of the rules that govern their society.

so voluntary compliance.. not us

**and this is what we want..? this is what our souls crave..? or just the best we think we can get.. because.. science of people ness

*What if we sought to clearly define what we stand for, by **showing, through a participatory, non-dominating constitutionalising process, that we are part of the structures of power that shape our life chances?

*good .. let’s do that.. ie: hosting-life-bits via self-talk as data

Iceland is showing the rest of the world that it is possible to ask nearly half a million people how they want to be governed and get a sensible answer. “Taking back control” might be given a radical new meaning if its example were followed.

organized, accessible activities for teens/young adults as prevention against substance abuse: #PEI, can we DO this?https://t.co/TObxao5MuS (http://twitter.com/bonstewart/status/822078829241962497?s=17)

do it for all/globe.. call it rat park

Gudberg Jónsson, a local psychologist, and Harvey Milkman, an American psychology professor who teaches for part of the year at Reykjavik University

Katrín Jakobsdóttir (pronounced [ˈkʰaːtʰrin ˈjaːkʰɔpstouhtɪr]; born 1 February 1976) is an Icelandic politician, the Prime Minister of Iceland since November 2017 and a member of the Althing (Iceland’s parliament) for the Reykjavík North constituency since 2007. She became deputy chairperson of the Left-Green Movement in 2003 and has been their chairperson since 2013. Katrín was Iceland’s Minister of Education, Science and Culture and of Nordic Co-operation from 2 February 2009 to 23 May 2013.

In the wake of the 2017 Icelandic parliamentary election, President Guðni Th. Jóhannessontasked Katrín with forming a governing coalition to consist of the Left-Green Movement, the Progressive Party, the Social Democratic Alliance, and the Pirate Party. Coalition talks between the four parties formally began on 3 November 2017, but were unsuccessful because of Progressive Party concerns that her coalition would have too thin a majority. As a result, she sought to lead a three-party coalition with the Independence Party and Progressive Party. After coalition talks were completed, Guðni formally granted Katrín a mandate to lead the government, which was installed on 30 November. She is the second woman to serve as Prime Minister of Iceland.

An airline is going to pay 2 friends $4,000 each per month to move to Iceland and travel the world, accommodation included

Borzou Daragahi  (@borzou) tweeted at 5:12 AM – 6 Aug 2018 :
How did Iceland do it? By screwing over its banks instead of its people — letting financial institutions go bankrupt, or nationalizing them, seizing their assets, including corporate headquarters that have been repurposed for tourism https://t.co/cVKhLXQxJL (http://twitter.com/borzou/status/1026425720409653248?s=17)