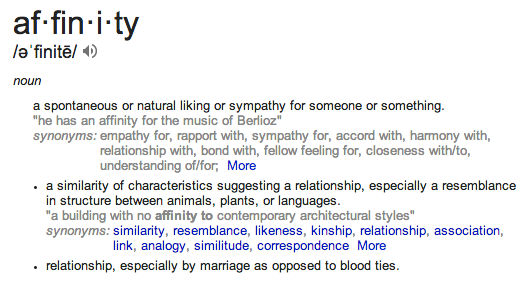 how do we give kids grit.
how do we get them to find a passion.

if you’re just giving skill and drill – not doing any better than books in school.

you too can be a star if you want to put in your 10000 hrs of passion.
expertise is not individual.. tied to community. 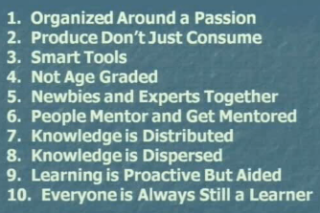 An affinity space is a place – virtual or physical – where informal learning takes place. According to James Paul Gee, affinity spaces are locations where groups of people are drawn together because of a shared, strong interest or engagement in a common activity. Often but not always occurring online, affinity spaces encourage the sharing of knowledge or participation in a specific area, and informal learning is a common outcome. In his coining of the term, Gee takes the notion of participatory cultures and reframes it to the idea of “space.” To Gee, what is happening in these online cultures is not merely a “culture” – and far different from a “community.” In Gee’s view, the word “community” conjures up images of belongingness and membership. Instead, he has defined these worlds as “spaces” – a term that allows for the “robust characterization of the ebbs and flows and differing levels of involvement and participation exhibited by members”

An affinity space is a place or set of places where people affiliate with others based primarily on shared activities, interests, and goals, not shared race, class culture, ethnicity, or gender (p. 67).

Gee (2004) refers to affinity spaces and states, “Learners ‘apprentice’ themselves to a group of people who share a certain set of practices (e.g. learning to cook in a family, learning to play video games with a guild, learningto assemble circuit boards in a workplace, learning to splice genes in a biology lab), pick up these practices through joint action with more advanced peers, and advance their abilities to engage and work with others in carrying out such practices” (p. 70).

What Gee (2004) tries to explain about Affinity Spaces is not an attempt to label a group of people. By affinity space he means a space where people can interact and share a lot with each other. the people who are interacting in a space might find themselves as sharing a community with some others in that space, while other people might view their intercations in the space differently. Gee (2004) adds,

In any case, creating spaces within diverse sorts of people can interact is a leitmotif of the modern world (p. 71).

1) The affinity in these spaces is to the endeavor, not other people.People from all ages, ethnicities, educational levels, and cultures play/create together – often anonymously or using alter-identities. Their participation is due to an affinity for the contents of the space.

3) Some portals are strong generators. The computer can be used to create new characters or any aspects of the game.

4) Content organization is transformed by interactional organization. The idea that creation can come from more than simply site designers, but from users, is a hallmark of these spaces. In affinity spaces, the way in which interactions are organized shapes the content of the game/site. Users – not just site designers – can help create, shape, and reshape the site and its content. Suggestions are welcome and encouraged, and site designers often use the suggestions of users to reform site designs and configurations.

6) Individual and distributed knowledge are valued.

9) Many forms and routes to participation are available.

10) Different routes to status are inherent in the game.

11) Leadership is porous and leaders are resources. Like the concept of “third spaces,” affinity spaces see “neither One…nor the Other…Rather, participants are something else besides, which contests the terms and territories of both

resonating with the purpose of the curiosity app ness.. connecting 7 billion people – new every day – via curiosity.. [allowing connections via echo\anechoic chamber ness in order to not be swayed by likes/popularity/inauthenticity …

what if curiosity were our only label(s)… credential even..