A whistleblower (whistle-blower or whistle blower) is a person who exposes misconduct, alleged dishonest or illegal activity occurring in an organization. The alleged misconduct may be classified in many ways; for example, a violation of a law, rule, regulation and/or a direct threat to public interest, such as fraud, health and safety violations, and corruption. Whistleblowers may make their allegations internally (for example, to other people within the accused organization) or externally (to regulators, law enforcement agencies, to the media or to groups concerned with the issues).

The Continental Congress enacted the first whistleblower protection law in the United States on July 30, 1778 by a unanimous vote. 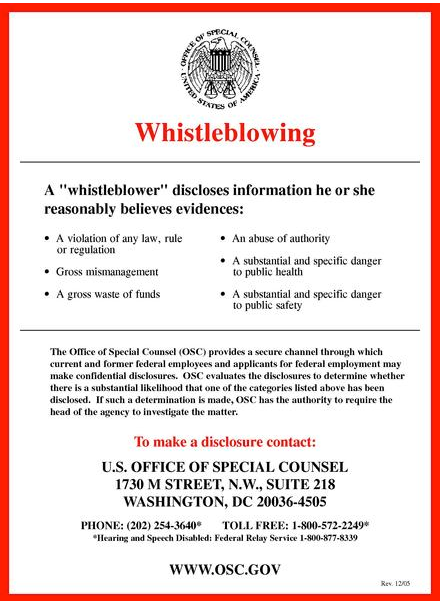 On 9/11, the government’s list of people barred from flying included just 16 names. Today, the no fly list has swelled to tens of thousands of “known or suspected terrorists”

If they can imprison Barrett Brown, they can do it to anyone

Immediately after sentencing, he released an aggressive, sardonic statement that reveals the real futility of this whole witch hunt; it’s a hell of a lot easier to keep someone behind bars than it is to keep them silent.

“Good news! — The U.S. government decided today that because I did such a good job investigating the cyber-industrial complex, they’re now going to send me to investigate the prison-industrial complex. For the next 35 months, I’ll be provided with free food, clothes, and housing as I seek to expose wrongdoing by Bureau of Prisons officials and staff and otherwise report on news and culture in the world’s greatest prison system. I want to thank the Department of Justice for having put so much time and energy into advocating on my behalf; rather than holding a grudge against me for the two years of work I put into in bringing attention to a DOJ-linked campaign to harass and discredit journalists like Glenn Greenwald, the agency instead labored tirelessly to ensure that I received this very prestigious assignment. — Wish me luck!“

Ellsberg – courage to face truth/reality of what we’re doing .. and act responsibly to change it

expose wrongdoing in the hopes of stopping it..

perhaps we’ve seen enough wrong to go beyond all the blowing. perhaps we save energy.. and just wake up. do/be/model another way. a better way. for all of us. everyone one of us.