intro’d to him here:

3:30 – once you selectively focus on statistical outliers and present them as if they can be isolated as a new norm you do grave violence with regards to how the application of this  kind of analysis works, practices cannot necessarily be replicated and practices are not necessarily responsible for apparent success

4:29 – there is no marketing tie in to truth, you can’t sell wealth only the idea of wealth

5:40 – we are so used to this we have lost sight of how dishonest this practice is… school is the arbiter of what is and what is not relevant

6:05: – if the trade off for what might be learned in school is low self-esteem and a life-long dependency on prescription drugs, shouldn’t that be disclosed

6:36 – despite this insanely dishonest approach, schools still fail at what they’re doing which is teaching how to pass their tests

create the game, regulate the game, manage the game, and somehow still lose.. it would be comical if children were not the beneficiaries of neglect and abuse

7:30 – biggest lessons i’ve learned at grad school of ed- this reliance on testing will not change at any time in the near future despite the widespread appreciation of just how poor a metric test scores are and their destructive influence on pedagogy. figuring out another approach involves a kind of imagination that is not demanded in ernest it also requires a kind of faith in children to be able to appreciate their own best interests that is largely if not completely absent

8:30 – teachers on the frontline of enforcing captivity

11:10 – liking something does not change its essence

11:30 – latent purpose of tests – testing designed.. means to generate broad spectrum of results, if too many do too poorly or too well, the tests are adjusted accordingly to create a pre-determined despertion of results… people are not only meant to fail, but the percentage that does are part of the test design – failure is endemic to the system

12:10 people internalize this failure..even many of the ones who succeed are convinced they have defects, certainly the millions who we drug so they can cope with being confined to the boredom and oppression of school – think there is something wrong with their brains

13:50 – the illusion of responsibility – if you fail it is your fault… [school prevents aspirations unless they pertain to school]

14:30 – fascism – exhalts nation/institution over the individual – school spirit – self promotion as a means of self justification

15:11 – excellence is the service of tyranny

16:10 – the act of forgetting – in school – amnesia is actually a form of resistance, .. when oppressors try to cram info into you – and consequences to failure.. logical to remember just long enough to pass the test or write a paper, but to resist by forgetting everything immediately after when you no longer need that info to protect your own survival

17 – teachers may win daily battles of making students demo – mind control.. but if they forget it immediately after, the teacher has wasted his time/life

the death of us

19:45 – schools are never shamed by the horrors they perpetuate, 1 in 12 have attempted suicide and 1 in 6 seriously consider suicide

20:15 – i would say that every single individual that supports compulsory schooling has blood on their hands

22:30: – if they are only in a position to oppress and cannot grant freedom they should not voluntarily affiliate themselves with a tyrannical institution

22:55 – hallmark – suppression of disent – so routine that no ever even thinks that this is inappropriate – it is merely a condition of the system that we must stifle any opposition any criticism any voice any display any gesture that suggests that a child has an independent mind beyond the confining walls of the institution for which he/she cannot escape- not merely school policy, codified in state law … 1969 – students do not shed rights… but then proceeded to degree that they do indeed shed their rights.. students may speak out …provided that they do not speak…

24 – ish in – instances of punishment – whoa.. for going to the bathroom et al…  in these instance many side with the police… these kids are out of line

if not enough – listen at 26ff – no shortages of these stories

26:50 – not so much the frequency – but the authority that is unearned/abused..

29:30 min – whoa – why bullying happens – worst bullies – adults that act with impunity – the autocracy of compulsory schools is #1 catalyst for bullying

30:20 – when people are oppressed – they need the sense to feel power over their own lives. – bully others to feel a sense of control…, bullying will never be seriously addressed because it is endemic to the autocratic structure of schools,.. which no one has intention of changing – and it requires to giving meaningful agency to children over their own lives –

a constructive response demands a surrendering of power/control by those who wield power.. this cannot and will not happen in compulsory schools – so interventions are waste of time/money and perpetuate lies about causes of bullying – anti-bullyings can only at best suppress systems… they will never address underlying cause – like an aspirin taken to relieve a brain tumor where the tumor must then never be addressed/discussed

32 – read prisoners of war rights –  .. these are routinely violated at schools

33:35 – what kind of propaganda is required to convince a parent to surrender their child to conditions which prior to bush – we would not subject enemy soldiers to

34:50 – in school there is no moral code when it comes to the treatment of students.. so atrosities are seemingly mitigated  – …not a freak experience – violence against students takes place all over, one yr – 1.5 mill assaults

36 – students are only the only population in america, who may be physically abused legally

everyone keeps saying – but not in my school

the power of denial occurs when one’s identity cannot be separated from associations, for a teacher to appreciate that schools are destructive institutions that do magnitudes more harm than good would lead to an existensial cirsis

37 – adolescence has been pathologized –

Find Peter‘s and Pat‘s talks.
or find them compiled via Pat – with slidedecks et al: 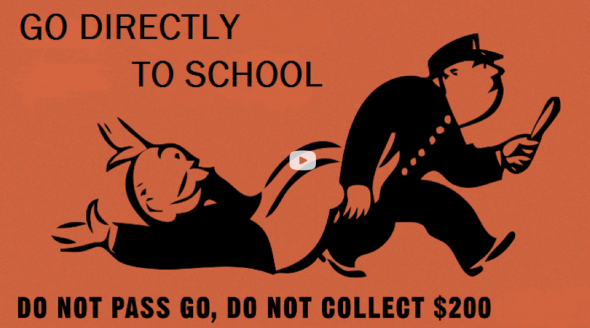 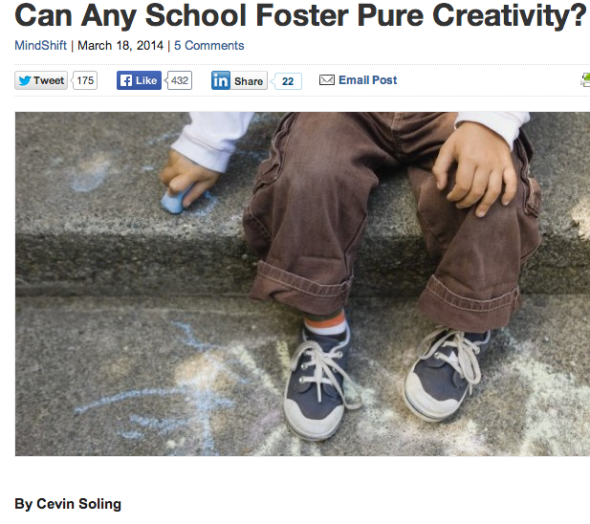 In spring 2009, Cevin’s documentary The War on Kids won “best educational documentary” for the New York International Independent Film and Video Festival. While the movie had a week-long run at New York City’s Quad Cinema, Cevin was invited to appear on the Colbert Report in which Cevin explained how schools have been transformed into what are “effectively prisons”. The film also screened at universities such as Harvard, and has been reviewed in The New York Times, Variety, and The Huffington Post. The documentary was also featured on The Dr. Nancy Show on MSNBC and Soling was a guest on radio shows such as The Lionel Show on Air America, The Joe Reynolds Show onWOR, and the Leonard Lopate Show on WNYC. 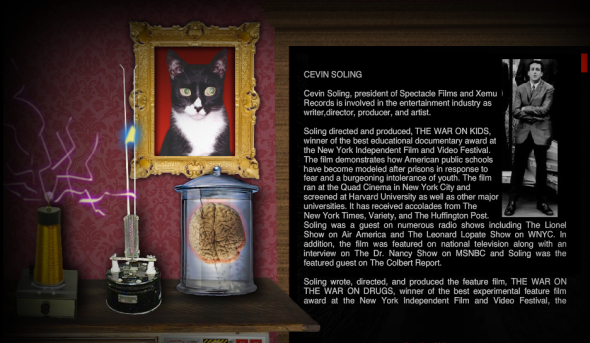 Cevin on the Colbert Report – 2009 – why bullying exists:

including voice of Henry Giroux,

28 – country where number 1 question – is are our schools safe – not about learning, about safety

33 – serious – how do you stop this terrible disease of drug addiction?

2003 – govt decides DARE is not working and withdraw funds

left off at lesson 35 min in

46 – Laurie Couture – instead of medicating and punishing

55 – went from campaign of – just say no to drugs, to just say yes to legal drugs, proof now that ritalin et al cause most to go on to addictions

1:11 – no justification for sequence of subjects – Gatto 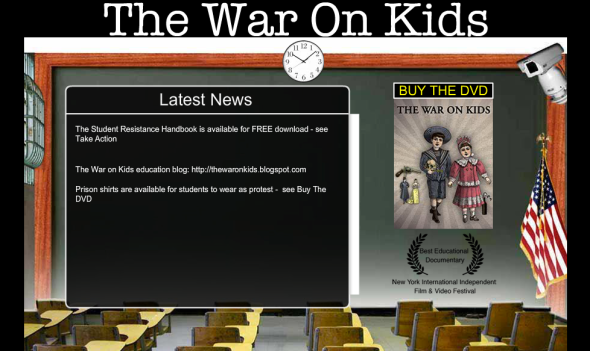 why do you need to assess them? – they are assessed by themselves..

unschooling – in a larger way.

Bill Ayers? – up next 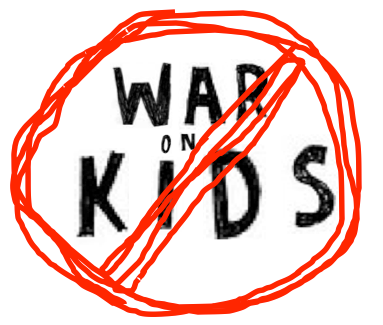 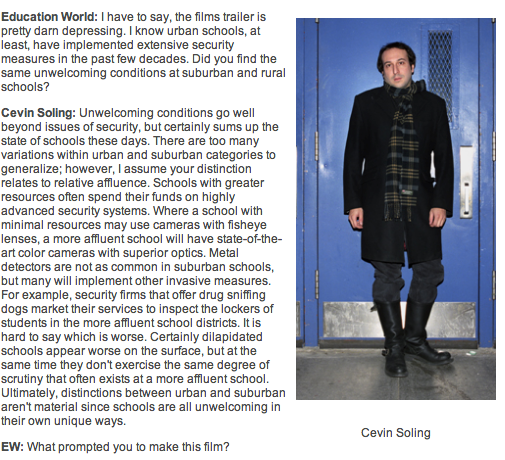 EW: What prompted you to make this film?

Soling: I went to one of the best public [high] schools in the country — in Scarsdale, N.Y., and graduated with honors. I also never had a single disciplinary issue. In short, I had one of the better experiences the system has to offer and I still found it to be profoundly degrading, psychologically detrimental, and intolerable in general. Sane people would not voluntarily subject themselves to those conditions. No students enjoy being in school unless they had their imaginations crushed to the point where they can no longer conceive of other ways of learning or socializing — which is the state of mind schools seek to attain. The problem is that kids have no say, no voice, and virtually no rights. This film was intended to express the collective voice of children.

Because schooling numerous children at the same time requires submission and conformity, social efficiency must always dictate and be the final arbiter in all decisions involving public school administration.

Consequently, obedience to authority emerges as the most important lesson that any student will learn.

Cevin interviewed by Steve and Pat for the 2014 homeschool conf filmfest:

38 min – what if employability isn’t our (healthiest) goal..

40 min – schooling creates a paradigm for all the other (unhealthies) institutions to exist.. teaches us to go along with the rest – the corruption is school is so much more fundamental because it enables all the others

42 min – i don’t buy into the conspiracy mindset (gatto) – more a result of the creation of bureaucracy – most people are earnest..

i like how Cevin isn’t able to peg this on anyone.. like none of us if one of us.. and danger of just one story..

46 min – schools creating problems they are trying to prevent

53 min – propaganda goes in knowing and sticking with an agenda – documentary is open to changing your mind in pursuit of truth.. for Cevin –  film was originally going to be – worst generation – he changed the story when he realized – schools could not be reformed – the problems with school is the construct…

55 min – propagandas have the edge – because they are smooth.. and have answers… et al. when you try to make something that offers a solution – no such thing as perfect solution – people will find the one tiny little flaw – and decide to stay with the status quo

the message – this is not workable/moral/tenable – so that people decide for self what to do… propaganda will sell the snake oil..

jan 2015 interview about war on kids

13% of americans proficient in literacy

whoa. that guy didn’t really want to interview.. it was his platform time. nice composure Cevin..

jan 2015 – why students should be allowed to cheat:

whether they are allowed or not.. nice explanation of why 95% of them do (according to Denise‘s research)

evolution of a criminal

deep gratitude for Cevin’s work toward all of us getting a new day.