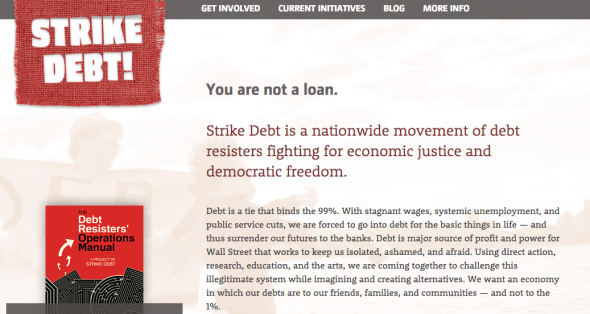 Strike Debt is an offshoot of Occupy Wall Street

We buy debt for pennies on the dollar, but instead of collecting it, we abolish it. We cannot buy specific individuals’ debt — instead, we help liberate debtors at random through a campaign of mutual support, good will, and collective refusal. All proceeds go directly to buying and canceling people’s debt.

first heard about it via Astra Taylor.. then  (from data & society databite #39 – Laura Hanna)

2014 – strike debt as base for debt collective: https://debtcollective.org/

which then put out: can’t pay won’t pay

So instead of making college more affordable, the GOP vision is for your parents to burn a year’s worth of tuition money on your birth. https://t.co/UxgdiySE2k (http://twitter.com/JasonKander/status/910340771357843456?s=17)

There hasn’t been a day in more than I decade that I haven’t referenced my private student loans, the bane of my existence. Tomorrow, I make my @nytopinion debut in The Sunday Review writing about related guilt and struggles. https://t.co/BLQlISzac5 (http://twitter.com/youngsinick/status/962387529927462912?s=17)

great start.. we need to get rid of money

At an average of $55,000 per year in tuition, many students who enter NYU’s School of Medicine end up following a career path that takes them into a high-paying specialty to offset their loans of $200,000 to $400,000.

With that in mind, NYU has decided to offer free tuition to students, regardless of need, encouraging them to go into family medicine, pediatrics, and research instead. The announcement came at the end of the White Coat Ceremony, where each student is issued their white coat, symbolizing the beginning of their journey.

“I’m proud to announce that as of right now, every student that we admit to New York University School of Medicine comes tuition-free,” Kenneth G. Langone, chair of the board of trustees, declared in a video announcement on Thursday. “And this includes the incoming class and the upperclassmen as well that are here right now—no more tuition. They walk out of here unencumbered, looking at a future where they can do what their passion tells them, which is to help people live better quality lives,” he added.

The plan, which will cover the standard tuition of approx. $55,000 per year, will not cover room and board or fees, which average $27,000 per year.

To cover tuition, the university has raised three-quarters of the expected $600 million needed from private donations and grants.

Jason Hickel (@jasonhickel) tweeted at 4:53 AM on Mon, Nov 26, 2018:
So my department just circulated a list of “student debtors” – students who haven’t been able to pay their whole fees who will be withdrawn in the middle of their studies.
Let’s be clear: the term “student debtor” should not exist, and has no place in a civilized society.
(https://twitter.com/jasonhickel/status/1067023523170975744?s=03)

@locusmag: “There’s a name for societies where a small elite own property and everyone else rents that prop­erty from them: it’s called feudalism.” A new article by @doctorow!

Professors are offered substantial bribes to select the most expensive texts, and high-performance digital tools make it easy for publish­ers to make minor alterations every year or two so that earlier “editions” of the text are no longer in synch with the professors’ lesson plans, making used books effectively worthless.

@diltiagem: Starting to feel like we should do a big GoFundMe nationally since there’s so many people who need it. Everyone contributes money to the GoFundMe and it goes to whoever gets sick

The young people will have more of the debt cancelled if they successfully engage in training or an educational programme.