a fear that we have to control people because otherwise most will be lazy.

perhaps we haven’t yet seen it ourselves, because we haven’t yet experimented with freedom in an ecosystem where the ongoing/daily/driving question is – what does it mean/matter to be human and alive. 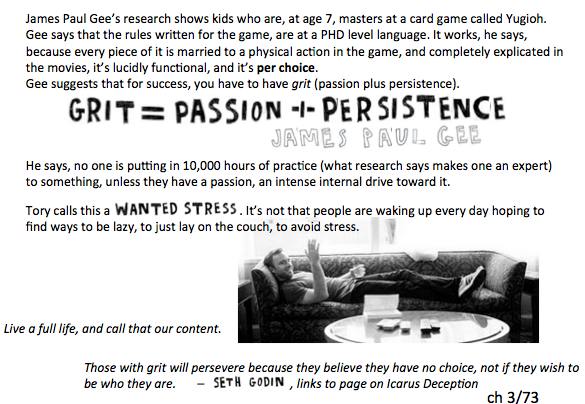 100% freedom with not even a raised eyebrow matters.

Many people who do work that matters “have work habits that seem downright lazy by the standards in their field” 99u.com/articles/52345…

As Feynman admitted in a 1981 interview: “I’m actively irresponsible

on (seemingly) laziness of thinkers

The more intelligent don’t get bored easily as they can engage themselves in their inner worlds. The less intelligent, on the other hand, use physical activity as a way to beat the boredom.

never nothing going on ness..

The thinkers were much less active during the business days of Monday through Friday than the non-thinkers. On the weekend, however, there was curiously no difference between the groups.

fitting with our original questioning.. can’t wait for weekend.. .. we’re all begging for as the day ness.. aka: not some part\ial fix

A central theme running through all Enclosure advocacy in the eighteenth century was that “commoners were lazy.” And their very obsession with this “problem” is itself an indication of the economic significance of the commons.

They used laziness as a term of moral disapproval. But what they meant was that commoners were not always available for farmers to employ. We might ask why were they unavailable?…. In fact… every commoner was lazy, whether wages were high or not. This suggests that they refused to work because they could live without wages, or regular wages.

Their laziness becomes an indicator of their independence of the wage.

And the degree of frustration critics felt when they saw this laziness may be a guide to how well commoners could do without it.128

this.. after showing how they (those in control) were ..

when we consider the word lazy, we realize that it does not explain anything. it is only a negative judgment made about another person who is unwilling to do what we want them to do..

right to be lazy