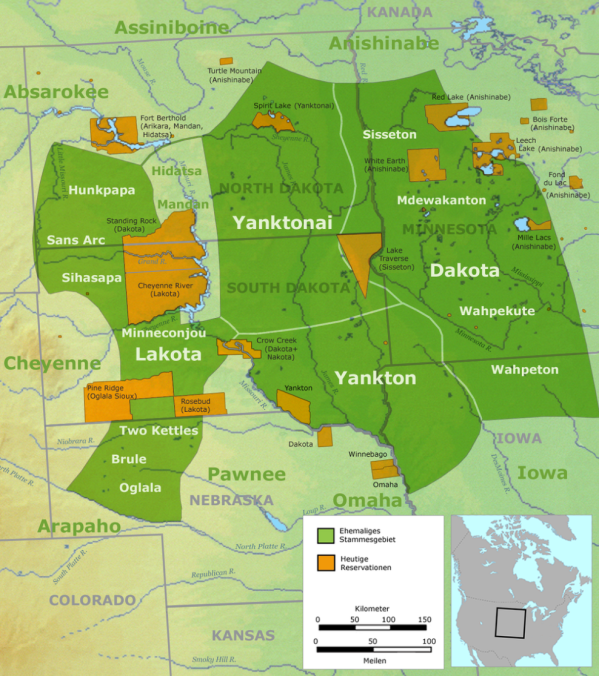 The reservation has a land area of 9,251.2 square kilometers (3,571.9 sq mi) and a population of 8,250 as of the 2000 census. The largest communities on the reservation are Fort Yates, Cannon Ball and McLaughlin. Other communities within the reservation include: Wakpala, Little Eagle, Bullhead, Porcupine, Kenel, McIntosh, Morristown, Selfridge, Solen.

An Indian reservation in North Dakota is the site of the largest gathering of Native Americans in more than 100 years. Indigenous people from across the US are living in camps on the Standing Rock reservation as they protest the construction of a new oil pipeline. As a result, a new community has emerged. The BBC’s Charlie Northcott went to North Dakota to meet the protesters and discover what goes on in camp.

Dear @POTUS blasting people with water in freezing cold weather is a use of lethal force. Stop this madness! Stand up for the native youth. https://t.co/faOHwTL4Vp (http://twitter.com/MarkRuffalo/status/800699350951202816?s=17)

The incredible global group Geeks Without Bounds has been bringing Internet as a human right to Standing Rock Indian Reservation.

Read about the intricacies of remote wi-fi mesh networks at http://gwob.org/internet-at-standing-rock/, and chip in to support their work with Digital Smoke Signals power free and open communications for the water protectors at https://www.gofundme.com/waterissacred

on the day they deem “thanksgiving”, this is happening at #standingrock#NoDAPL

In the fight over the Dakota Access Pipeline, Native American
activists achieved one of the most galvanizing environmental
victories in years — and it all began with a group of teenagers.

Jasilyn Charger was 19 when she learned her best friend had killed herself. Charger was Lakota Sioux, and she had left the Cheyenne River Reservation in South Dakota for Portland, Ore., just a few months earlier. But in the summer of 2015, she flew home for her friend’s funeral. Then, two days later, while she was still in Eagle Butte — the largest town on the Cheyenne River Reservation with a population of 1,300 — another friend killed herself. Charger was shocked. “It hurt all of us because these were people who we thought we knew but really we had no idea what they were going through,” she said. “It really woke us up.”

Native American teenagers and young adults are 1.5 times as likely to kill themselves as the national average, with suicides often clustering in epidemics that hit and fade. Suicide is so common on the reservation that Lakota youth don’t bother to say “committed suicide” or “attempted suicide.” They just say “attempted” or “completed.” By the end of that summer, Jasilyn told me, 30 Cheyenne River kids attempted and eight completed.

As the suicide wave crested and broke, the youth group, now called the One Mind Youth Movement, turned to something more political. They spent that fall as part of the local campaign against the Keystone XL pipeline, whose route would cut under the Cheyenne River just upstream from the reservation that bears its name. And after the Obama State Department denied the Keystone XL permission to cross the U.S.-Canadian border in November 2015, they moved their focus to the neighboring Standing Rock Sioux Reservation, where the company Energy Transfer Partners was trying to build the Dakota Access Pipeline. That pipeline would move half a million barrels of oil a day beneath the Missouri River, the main source of drinking water for the Standing Rock Sioux, which is one of the cousin bands to Cheyenne River, as well as for other downstream Sioux reservations.

little remarked upon at the time was the unlikely seed from which the movement had grown: an anti-suicide campaign among a tight-knit group of youths, most younger than 25, impelled by tragedy and guided by prophecy.

Lakota culture is effectively run by the old — traditionally young people are supposed to apologize before they even speak in front of elders — so for the youths to take it upon themselves to lead a movement was a radical act.

Life in the prayer camp was supposed to be lived “in ceremony,” a sort of mindfulness or religious retreat in which all things are done with the intention of maintaining purity. Days began with a water ceremony; the sacred fire had to be regularly fed; meals began with prayer and a “spirit plate” served for the ancestors; alcohol and drugs were strictly forbidden.

It was, in other words, the sort of safe place that the youths had been insisting was necessary for them.

For Charger and other leaders, as important as the idea of the safe space was the idea that activism would teach children the skills to survive more immediate threats, like bullying and drug abuse. They hoped to pass on skills at the camp that they themselves had been taught by Keystone activists in their community.

The I.I.Y.C. was the first experience of family for many members. “A lot of them never had the opportunity to be kids, because they were always trying to take care of themselves or take care of their parents.” This process, one of the youth leaders told me, was “terribly beautiful,” an unburdening of the “historical trauma” that had defined their lives. “No one realizes what the repercussions of colonization have been, the repercussions of forced removal,” Wise said. It was hard, she stressed, to explain to people that these were things that had happened recently, to her generation’s parents and grandparents.

The unified nation of Oceti Sakowin was broken into widely separated reservations, and after Congress privatized reservation land, many starving Lakota families had to sell off their property to white farmers, further cutting the size of reservations. The U.S. Government banned the Sundance, the Plains religions’ most sacred ceremony, with its days of fasting and ritual bloodletting; Native Americans could no longer openly practice their religions. But perhaps most devastating to their psychological health were the boarding schools, in which generations of Indians were sent to schools to be taught white culture. This system reached its nadir in the forced assimilation campaigns of the 1940s and 1950s, when the grandparents of many of the I.I.Y.C. youths were taught English literally under the lash.

At Standing Rock, the youths felt they were developing the means to overcome that trauma. The key, as Charger explained it, was to let their history go, which they took as an almost holy responsibility: Forgive, and then take action to spare those who are coming in the future. “We don’t want our children to inherit this depression,” she said. The remarkable thing about this philosophy was that it was deeply practical: not just forgiving “the white man” but also the parent who beat you. For many, this provided a means to re-establish difficult relationships with parents or siblings. But it also helped bind them together into their own sort of family.

Thomas Tonatiuh Lopez Jr. was one. A 24-year-old Lakota and Latino from Denver, Lopez grew up the child of AIM and Chicano activists, and as the adopted grandson of the powerful medicine man Leonard Crowdog. He came to Standing Rock in September on a supply run and hadn’t intended to stay.

Among the Native Americans there were strict rules that the protest would have to be done in “peace and prayer.”

The youths took this seriously, even as they found themselves under physical threat.

Lopez, who had returned to the camp to stay in October, made a speech: “Though you have brutalized us, we will not brutalize you.”

via Alnoor Ladha.. on nodapl at standing rock

1. There is a global convergence of movements – Over 300 North American tribes had came together for the first time in history. Standing alongside them were over 100 Indigenous communities from all over the globe. A contingent from the Sami people, the Indigenous peoples of Scandinavia, had traversed the Atlantic to show their support the day I arrived. They were joined by black bloc anarchists, New Age spiritualists, traditional environmentalists, union organizers and ordinary Americans who have never attended a protest……various movements from around the world including the Umbrella Movement in Hong Kong, the Pink Tide in Latin America, the landless people’s movement from India, the anti-austerity movement in Europe, the global Occupy movement, and the countless “awakenings” spreading across the African continent are uniting as expressions of the same impulse: a belief that the neoliberal capitalist system has failed the majority of humanity and a new world is emerging.

2. A more holistic activism is emerging – ..Charles Eisenstein ..we will receive an invitation to .. ‘the deplorables.’ ..Pancho Ramos-Stierle : ‘Brother, your soul is too beautiful to be doing this work.’..stare hate in the face …hold a compelling invitation to the haters to fulfill their beauty.”

3. Occupation of space is a critical tactic – ..a physical spectacle that forces the corporate media to tell the stories it would otherwise like to ignore. It creates networks of solidarity and deep relationships that span beyond the time and space of the occupation..

5. There is a common antagonist – ..the deadly logic of late-stage capitalism…a cannibalistic global economy that requires perpetual extraction, violence, oppression, in the service of GDP growth, which in turn, benefits a tiny elite at the expense of the world’s majority….a Algonquin word, wetiko, that refers to a cannibalistic spirit that consumes the heart of man..We are not just fighting a pipeline; we are fighting the wetiko spirit that has taken hold of our planet like invisible architecture

Wetikois inherently anti-life. And what we are all fighting for is a new system that recognizes our interdependence with the Earth and with each other, and that allows our highest selves to flourish.

they had laid the groundwork for the movement of our lifetimes…standing rock was not just about one pipeline.. it symbolized a struggle for justice of all kinds.. racial/econ/treaty/gender/climate.. .. standing rock made it impossible to ignore the historic and present oppression of indigenous people..