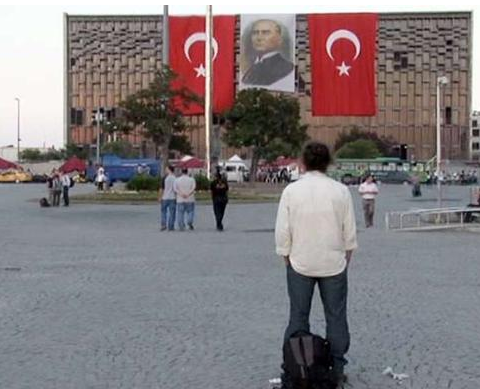 Just before sunset on June 17, 2013, a lone man walked across Istanbul’s Taksim Square and began to stand, facing toward the Ataturk Cultural Center. At first he seemed like any other person visiting Taksim Square, except for one exception: he didn’t move. Hands in his pocket, he just stood there, like an automaton.

As word of the standing man spread across the Internet, Turks adopted the hashtag #duranadam, which means “standing man” in Turkish. Before long, people in other parts of Turkey began their own standing protests in solidarity with the man.

several pics in the article via Zeynep – bulk of it via Andy.

from Srećko Horvat‘s radicality of love:

the other ie (besides dance protest by members of turkey’s state opera and ballet).. is the so called, now famous, ‘standing man’..  erdem gunduz.. a dancer and choreographer. the first evening he was standing there for 5 hrs and staring at a portrait of mustafa kemal ataturk. soon, similar protests consisting of simply stopping and standing still spread everywhere in turkey..

it was a brilliant strategy, reminiscent of tiananmen square’s ‘tank man’ or the recent silent standing performance by jelen topic form bosnia… why is it a good strategy? because non violence is much harder to deal w than violent protest, the govt now was tempted to arrest people who were doing nothing more than standing still. of course, they arrested the standing people in the end as well..

what the turkey opera/dance and erdem repeated is the famous slogan of e new dance group.. formed in ny in 1932 by two jewish dance students, which states: ‘dance i s weapon in the class struggle’..

the main concept of the new dance group is what an ideal dance group should look like. besides dancers, it attracted ordinary workers as well.. and just of  dime, the students would receive an hour long dance class, an our of improv based on a social them and an hour of discussion o social issues.. .. that’s exactly what we need today..  or at lead, dancers who are ware dancing is not always ‘pure art’ it is always a political act as well..