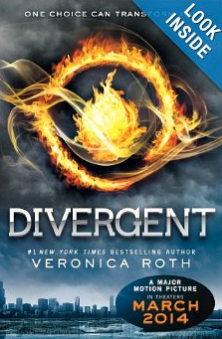 divergent: you don’t fit into a category, they can’t control you..

all of my life i’ve lived by your rules, not anymore..

Divergent is the debut novel of American author Veronica Roth and is the first installment in the Divergent trilogy. It is set within adystopian version of Chicago. The novel has been compared to similar young adult books such as The Hunger Games and The Maze Runner because of its similar theme and target audience. Roth has said that the idea for the series was born while she was studying in college. Its major plot device, the division of society into personality types, is similar to Philip K. Dick’s 1964 novelClans of the Alphane Moon and Rupert Thomson’s Divided Kingdom.

Summit Entertainment purchased the media rights to the book, and production on the movie took place in 2013, also titledDivergent. The second novel in the trilogy, Insurgent, was published on May 1, 2012, and the third and final book, Allegiant, on October 22, 2013.

This story takes place in the city of Chicago in the distant future. The city is divided into 5 factions:

On a given day each year, all sixteen-year-olds take an aptitude test that will tell them for which faction they are best suited. After receiving the results of their test, they must decide whether to remain with their family or transfer to a new faction.

Sixteen-year-old Beatrice Prior was born into an Abnegation family, but selflessness has never come naturally to her like it does to her brother, Caleb. She feels lonely and constricted by her environment and knows she does not belong. When the time comes for Beatrice to take her aptitude test, the results are inconclusive: instead of fitting neatly into any one faction, she shows equal aptitude for three: Abnegation, Erudite, and Dauntless. This makes her “Divergent” and she is warned never to share this information with anyone for fear of her life.

They must rank in the top ten at the end of initiation, or else they will be dismissed and become factionless.

Stage two puts the initiates into simulations, much like during the aptitude tests, in which they will encounter various fears—or scenarios symbolic of their fears—and are tested by how quickly they are able to calm down. Because Tris is Divergent, she is able to recognize that she is under a simulation while others do not, and she can even manipulate the system. After monitoring Tris’s results, Four realizes she is Divergent. Tris is again warned never to allow anyone to know that she is Divergent, because those who are found to be Divergent end up being killed by faction leaders.

The initiates prepare for the final stage of their initiation, the fear landscape, a gathering of all of their fears in a single simulation. In the fear landscape, all of them, Divergent or not, will be aware that they are under a simulation and must use the skills they learned in the previous stages to break out of each fear. They will be scored according to how many fears they have and the amount of time it takes them to get through the simulation. Tris’s relationship with Four continues to grow, and he lets her into his own fear landscape. Tris learns that Four only has four fears in his landscape, a record, hence his nickname.

After her test, Tris, along with all other Dauntless members, is injected with a new “tracking” serum that is supposedly only activated if someone goes missing.

The plan is carried out that night; the serum induces a simulation and all of the Dauntless become sleep-walking soldiers, hypnotized into attacking the Abnegation area of the city. However, the serum does not work on Tris or Tobias (Four) because they are both Divergent.

Even if it were true that these films were meant to vaccinate kids against the left, there’s no socialist state—or even highly programmatic, institutionalized left—for these young alleged individualists to react against: In the 21st century, it has yet to be built. Is it possible that a 13-year-old will read Divergent and develop a critique of the social safety net? Perhaps, but what’s more likely is that the same teen will gain a lens through which to understand the vast inequality around them. They might even get an idea that they could do something about it. 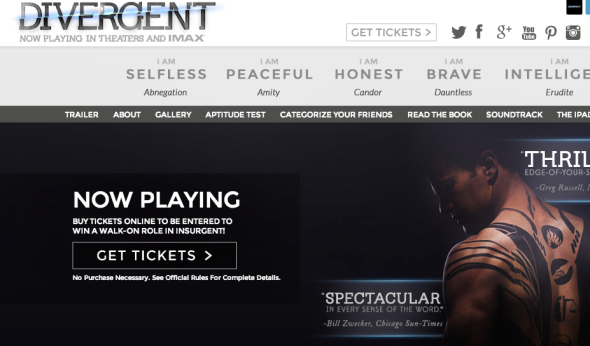 in real life.. share by Xiuhtezcatl about Shailene on fb:

My sister Shailene Woodley standing with frontline communities to protect their land and water from the Dakota Access pipeline! Stay strong -prayers out!