intro’d to Clint via upworthy here:

His Star Student Wants To Go To College. She’s Not Getting In 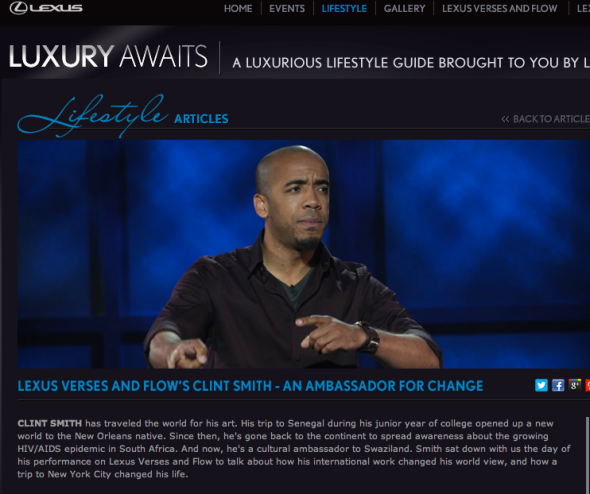 CLINT SMITH has traveled the world for his art. His trip to Senegal during his junior year of college opened up a new world to the New Orleans native. Since then, he’s gone back to the continent to spread awareness about the growing HIV/AIDS epidemic in South Africa. And now, he’s a cultural ambassador to Swaziland. Smith sat down with us the day of his performance on Lexus Verses and Flow to talk about how his international work changed his world view, and how a trip to New York City changed his life.

read more from above link..

the danger of silence

In the classroom, Mr. Smith combines his passion for poetry and justice to teach students the importance of their own stories as catalysts for meaningful social action.

Outside of the classroom, he serves as the school’s slam poetry coach and is the founder of ‘Collective Voices For Justice,’ which empowers and trains students to become community organizers.

In 2013, Clint was named the Christine D. Sarbanes Teacher of the Year by the Maryland Humanities Council. He has been featured in the Washington Post and is profiled in the book, “American Teacher: Heroes in the Classroom” (Welcome Books, 2013) as one of the top 50 educators in the nation.

In addition to teaching, Clint is an Individual World Poetry Slam finalist and was a member of Washington D.C.’s 2012 & 2013 National Slam Poetry Teams. His poetry has been featured on TVOne’s Verses & Flow and at the International AIDS Conference, the Bill & Melinda Gates Foundation, the Joint Center for Political and Economic Studies, and Teach For America’s annual alumni conference.

In 2012, Clint served as a cultural ambassador to Swaziland on behalf of the U.S. State Department where he conducted poetry workshops on HIV/AIDS prevention, cross-cultural understanding, and youth empowerment.

He is an alumnus of Davidson College and New Orleans’ public school system.

Aside from poetry, Clint loves his mom, soccer, scrabble, and the feeling you have right after you eat way too many barbeque ribs.

on his tumblr from june 12:

This past December, my dad received a kidney transplant after years of battling chronic kidney disease and exhausting dialysis treatment. We’ve always been close, but nothing will have you reflect on the important place a person holds in your life the way a serious illness does. I wrote this poem and shared it with him and the rest of my family when he was in the hospital. I’m thankful that I can more fully appreciate all he has done for me and still be fortunate enough to have him around. I couldn’t ask for a better man to look up to.

My Father is an Oyster

I walked into a prison expecting to meet criminals. Instead, I found a community of men. – How I learned more about the criminal justice system in one day than I did reading 100 books.

Our society constructs ideas about what it means to be a prisoner.

Those ideas, in turn, teach us how to evaluate a prisoner’s worth as a human being.

if I’m honest, I know I’ve been socialized to believe that to be “criminal” is to somehow be less deserving of humanity.

when did it learn it was to become a cage.. but how can a cage become a refuge

a circle of men – swallowed by the world’s indifference.. the totality of their personhood has been diluted to a single act.. singly defined by the worst thing they’ve ever done..

we don’t remember that they are people.. worth remembering

they once existed beyond this place.. they still do

a nother way – all of us

Tonight was the last class of the semester in the prison and as always I’m grateful to these men for allowing me to learn alongside them.

We discussed second-wave feminism and intersectionality, what it means to unlearn the patriarchy and misogyny we’ve been socialized into

It turned into a broader conversation about what it means to relinquish power when power is often a part of how we construct our identities.

We discussed how even the language we use unconsciously might perpetuate gendered power imbalances. That language can be an act of violence.

Just finished watching the documentary “The Farm: Angola, USA” about the life of six men inside of Angola prison. Can’t recommend it enough.

The film forces us to grapple w/the fact that people in prison are actual people. On the most fundamental level they’re no different from us
I firmly believe that if more people interfaced w/the incarcerated, the way we think about criminal justice policy would significantly shift

none of us if one of us ness… same’s true for homeless.. sick.. seemingly well.. et al
https://en.wikipedia.org/wiki/The_Farm:_Angola,_USA
https://www.youtube.com/watch?v=FFqVIlL0A2A

b ness
we are crazy people..

32 min – if slavery would have been extended.. i believe it would have been much like this.. a prison plantation
37 min – if you have money.. money works out a whole lot of stuff. and we just didn’t have it..
39 min – a man should not have … no chance..

do -overs ad finitum… for all of us.. everyday. as the day.
equity.

43 min – the point is.. i’ve changed… what i need is freedom..
44 min  – what you needed was a good lawyer in the beginning.. 20 yrs later louisiana isn’t going to look at any discrepancies..
a brave man – to entertain hope at that level today..

I don’t think people fully appreciate how the public policy in this country actively makes the lives of poor people more difficult. (http://twitter.com/ClintSmithIII/status/953796298112688128?s=17)

Before enslavement Africans were called “apes”

Before the Holocaust Jewish people were called “rats”

Before the Rwandan genocide Tutsis were called “cockroaches”

Calling undocumented people “animals” as the president just did is gravely serious. It’s not just an offensive word

Oh, this is so wonderful. I think @CajunAngela will appreciate how meaningful this is. https://t.co/VpnyVvyhnS

In 2005, 3 days into my senior year of high school, my family evacuated New Orleans bc of Hurricane Katrina. Our home was flooded &amp; I finished high school in Houston. But in today’s mail I got an honorary diploma from the school I didn’t get to graduate from &amp; it means the world. https://t.co/DrpTQbiOHw

14 000 likes and growing.. this is perpetuating a mindset.. that is not behooving to humanity

nostalgia for living there and the flood.. can’t even imagine that.. tying it to a diploma is unsettling.. like ged ness

What happens when you begin to believe that you inherently deserve what you have is that you then begin to believe others inherently deserve what they *don’t* have.
The result is decades of public policy that often punish ppl in poverty instead of assisting them in escaping it.
Original Tweet: https://twitter.com/ClintSmithIII/status/1047480372882227200