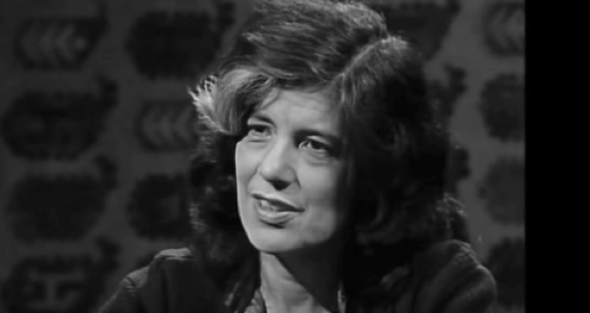 read her a bunch via Maria.. adding page just now because of ..timing.. and of Maria’s post on Susan’s… interpretation…

Sontag, 50 years ago, on the trouble with treating art and cultural material as “content”—terrifyingly timely today buff.ly/1MPXCCb

this part in particular:

and then this too:

Real art has the capacity to make us nervous. By reducing the work of art to its content and then interpreting that, one tames the work of art. Interpretation makes art manageable, conformable.

In another stroke of prescient and urgently timely insight, Sontag considers this notion of “content” — perhaps the vilest term by which *professional commodifiers refer to cultural material today — and how it defiles art:

Interpretation, based on the highly dubious theory that a work of art is composed of items of content, violates art. It makes art into an article for use, for arrangement into a mental scheme of categories.

The interpreter, without actually erasing or rewriting the text, is altering it. But he can’t admit to doing this. He claims to be only making it intelligible, by disclosing its true meaning. However far the interpreters alter the text … they must claim to be reading off a sense that is already there.

Even half a century ago, in fact, Sontag was wary of the violence embedded in the act itself:

Today is such a time, when the project of interpretation is largely reactionary, stifling.

am guessing this came from Maria or Keri ?: 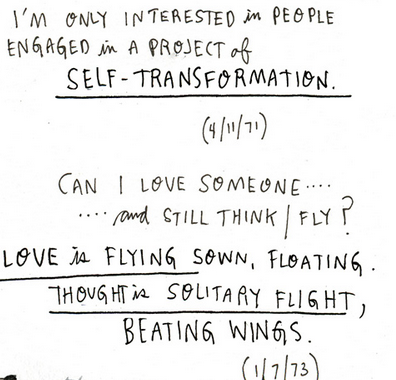 whoa… makes me think of .. what happens to you when you love someone.. can you still think/fly

i’m only interested in those i admire.. i don’t light candles.. i re read them… it’s too serious to be sentimental

4 min – why ask me… you have some other agenda.. and it’s not mine… i don’t think in journalistic terms.. i don’t draw lines..

ah. yes. so curious about us missing this.. but critiquing the web.. et al…

8 min – and then you started inventing…

9 min – i don’t have that experience..  i’m not where story is taking place.. if i read tolstoy i think i’m in early 19th cent russia.. it might instruct my experience rather than apply to it.. i’m not looking to see myself projected in stories.. any more than i’m trying to express myself when i write stories..

10 min – i don’t think stories are universal because read by diff people.. most powerful form of story is compact.. some forms are very compact.. and if compact likey to be economical in details.. and therefore this economy can be experienced by us w/ modern way of looking at things as abstract.. but i think it’s the particularity of story… that fascinates us…

imagination – toward –a nother way

25 min – process of selection – because you can’t tell everything…

27 min – john: i think all fiction is a fight against the absurd… there is nothing that is meaningless.. seems the same in fiction.. if it works..

28 min – i don’t agree with that.. i think once you have the .. details.. you assign meaning… i think that the dream.. is the telling of the dream.. i don’t think the dream exists… what does exist is the highly selective account… i think the finding of associations makes the meaning we find in dreams..

30 min – why does story rescue us from the absurd…

33 min – another kind of story telling that i think is freer of that ethical part of telling story to the people the story is about – because you’re embedded in that community..

34 min  – storyteller enlarges our field of imagination..  it’s not that we live in terror of the absurd.. i think we live w/our imagination very quiet/still.. w all kinds of terrible conformities… that deprive us.. cut us off from life of the mind..imagination.. one of functions of story telling is to intro a sense of the fantastic – which might include the absurd.. i don’t think stories necessarily have meaning.. i don’t even know what that means..

45 min – john: as soon as a story is written.. it is transportable.. unlike oral.. then there is a kind of comment that needs to come in.. there’s the storyteller…  place story in context… placed in modern world… you have to give the feeling that what is being narrated there co exists in world..  susan: i see a bigger diff… you see world as full of stories.. with special people who constitute themselves as story tellers.. vehicles/secretaries.. i don’t see world full of stories in that sense.. i see stories that start with writer… i see not stories outside of literature…

49 min – john: on words being as close as possible to the non verbal… susan: when i write.. seems entirely diff activity.. ie: have to take my head off and put another head on…

what writing is about – to be better than talk–

when i write an essay – motive is something i perceive/think about… i’m asking self all the time.. is it really true.. same as.. can i say it better..

can we say it better by doing/modeling..? – on the alphabet being so limiting.. toward getting to grokking ness

52 min – when writing fiction.. not about the truth.. when i’m moved to write.. not because i’ve heard a story.. but because i hear language/sentence/voice in my head.. and sometimes i just have a first sentence.. it’s like a dictation i can revise many times.. not exactly dictation .. but more like induction… have to stop .. if voices aren’t talking anymore… once i heard the last line.. and i began to reason backward… for me it’s absolutely a process of invention..

55 min – john: for me.. there’s never that voice at the beginning.. it’s seeing  susan: i don’t see i hear…  john: for me the language comes after the people

58 min – john: crisis of nerve.. on not being able to write about something that you aren’t…

more on Susan (besides insight from Maria’s blog):

Susan Sontag (/ˈsɒntæɡ/; January 16, 1933 – December 28, 2004) was an American writer, filmmaker, teacher and political activist. She published her first major work, the essay “Notes on ‘Camp'”, in 1964. Her best-known works include On Photography, Against Interpretation, Styles of Radical Will, The Way We Live Now, Illness as Metaphor,Regarding the Pain of Others, The Volcano Lover and In America.

Sontag was active in writing and speaking about, or travelling to, areas of conflict, including during the Vietnam War and the Siege of Sarajevo. She wrote extensively about photography, culture and media, AIDS and illness, human rights, and communism and leftist ideology. The New York Review of Books called her “one of the most influential critics of her generation.” However, her essays and speeches sometimes drew controversy

post on self criticism… (off her commencement speech) via George:

I could generally just spend my day RT’ing @brainpicker

Against Self-Criticism – wonderful read on how our internal critics enslave us and how to break free brainpickings.org/2016/05/23/aga…

The tyranny of the superego, Phillips argues, lies in its tendency to reduce the complexity of our conscience to a single, limiting interpretation, and to convincingly sell us on that interpretation as an accurate and complete representation of reality:

Self-criticism is nothing if it is not the defining, and usually the overdefining, of the limits of being. But, ironically, if that’s the right word, the limits of being are announced and enforced before so-called being has had much of a chance to speak for itself.

the defining..over defining… of limits of being

You can only understand anything that matters — dreams, neurotic symptoms, literature — by overinterpreting it; by seeing it from different aspects as the product of multiple impulses. Overinterpretation here means not settling for one interpretation, however apparently compelling it is. Indeed, the implication is — and here is Freud’s ongoing suspicion, or ambivalence, about psychoanalysis — that the more persuasive, the more compelling, the more authoritative, the interpretation is, the less credible it is, or should be. The interpretation might be the violent attempt to presume to set a limit where no limit can be set.

Here, the ideological wink at Sontag becomes apparent. Indeed, the Sontag classic would’ve been better titled “Against an Interpretation,” for the essence of her argument is precisely that a single interpretation invariably warps and flattens any text, any experience, any cultural artifact. (How tragicomical to see, then, that a reviewer who complains that Phillips’s writing is too open to interpretation both misses his point and, in doing so, makes it.)

What Phillips is advocating isn’t the wholesale relinquishing of interpretation but the psychological hygiene of inviting multiple interpretations as a way of countering the artificial authority of the superego and loosening its tyrannical grip on our experience of ourselves:

Authority wants to replace the world with itself. Overinterpretation means not being stopped in your tracks by what you are most persuaded by; it means assuming that to believe one interpretation is to radically misunderstand the object one is interpreting, and indeed interpretation itself.

the sound of silence via Maria

“There are many fine things which we cannot say if we have to shout,” Henry David

Of the nine kinds of silence that Sontag’s contemporary and friend Paul Goodman outlined, “the fertile silence of awareness, pasturing the soul” is the kind we seem to have most hastily forsaken — and yet it is also the one we most urgently need if we are to reclaim the aesthetic of silence in the art of living.

The next morning, he arrives at school before everyone else and sits down to read a story, which absorbs him so wholly that he is transported to the elusive place he had been searching for all along.

Suddenly, in the middle of a page, he heard it. No sounds of footsteps, no people chattering, no radios, no bamboo, no kotos being tuned. In that short moment, Yoshio couldn’t even hear the sound of his own breath. Everything felt still inside him. Peaceful, like the garden after it snowed. Like feather-stuffed futons drying in the sun. Silence had been there all along.

In that moment, he learns what we so easily forget: that silence is not the absence of sound but the presence of an inward-listening awareness, an attunement of the mind’s ear and an orientation of the spirit toward a certain inner stillness — perhaps the positive counterpoint to loneliness, which so often thrives amid the crowd

susan sontag: ‘to photograph is to appropriate the thing photographed. it means putting oneself into a certain relation to the world that feels like knowledge – and, therefore, like power