1. people who want their days to matter

1. people who believe they own the mattering of their days [most don’t believe it’s legal/possible to think for themselves, be themselves]

2. a means (perhaps tech) to connect people in a more timely/serendipitous manner [grounds chaos if everyone is thinking for themselves]

If people are doing/being things that don’t matter to them, there’s little sustainability/thrivability/betterness. What you do and who you are needs to matter to you. Perhaps what matters most is figuring out what matters most. People need time and space to do/be that.
we were experimenting with the intersection of city and school. Seeking to scale each individual by crowdsourcing their curiosities into gatherings/connections that matter to them. To ground that inevitable chaos we’re crafting a match dot com (meet up) type app, to listen to curiosity.
Perhaps redefining school in this manner (aka: revolution of everyday life for all of us) could get at the root of all problems/solutions/life.

We believe what’s not yet been tried is a city-wide, during-the-day movement.

If this plays out like we’re anticipating, in even just one city, it could be enough evidence for people to start believing they can do it too. anywhere. today.

Because of our unhealthy state, overwhelmed with busyness, stress, and policy, perhaps money could provide a synchronicity to hasten dreams/visions (by helping people not think about money). Perhaps that hastening will help people see/believe enough to hasten global equity (everyone gets a go). To free people, spaces and tech, all at once, to model this vision of a healthy future, we’re seeking 20 million. [A ballpark figure: 1/that amount is being thrown around nationwide for race to the to initiatives; 2/it could be the future monetary value in a community if we did ed funding differently, ie: per census, and/or if we start practicing a time/talent share economy.]

In old age the emphasis shifts from doing to being, and our civilization, which is lost in doing, know nothing of being. It asks: being? What do you do with it?   – Echart Tolle

flavors of success.. begin being. 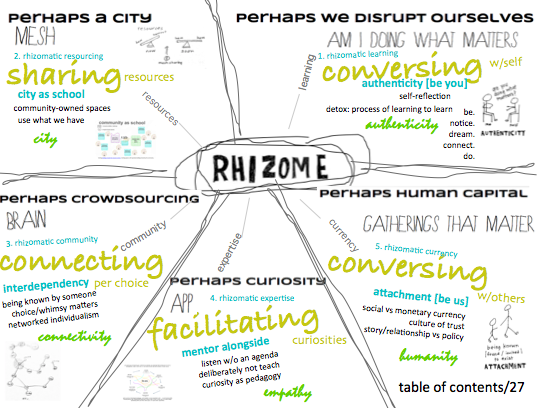 table of contents of a be you book.

There are cool innovations happening in public ed, but none are equitable (accessible to everyone). Rather than waiting for ideas to scale, imagine we scale each individual. What if people start believing it’s legal to think for themselves, and start doing/being their authentic art. Experimenting/solving/creating everyday, the thing they can’t not do. Perhaps we redefine success – everyday.

Imagine the city as the school. Imagine all the money (trillions), time (7 hrs a day for 12+ yrs), and people (90%?), spent on public education, being funneled instead into enlivening local communities. Perhaps we have all we need, we just need to be more resourceful.

People don’t have an inclination toward laziness, we actually seek hard work. Hard work begs co-creation/connecting, to get the thing(s) done. Imagine tech (app) helping us to crowdsource, in a more timely and serendipitous manner, gatherings/connections that matter.

Imagine we decide to deliberately not teach and instead mentor alongside. To listen to each other, without an agenda. Imagine we trusted the allure of curiosity. Imagine tech (app) grounding the inevitable chaos of aggregating individual curiosities.

Clean air, clean water, et al, matters to us. Imagine if we realized the damage the compulsion of public ed causes everyday to the human spirit. This venture is not only a huge business deal, (public ed is #2 market in US), but more important, an incredible recapture of human capital. Perhaps we redefine success – everyday.

Our aim.. to hasten equity, by  redefining public education.

Getting at the rhizomatic root of the problem/solution/betterness/life. A global systemic change.

next step/phase/prototype/experiment/experience (aka: a nother way):