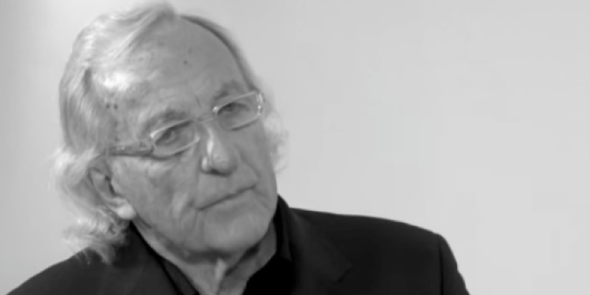 intro’d to John via utopia (via thoughtmaybe) – trailer:

the war you don’t see (found on John’s site):

if people really knew the truth, the war would be stopped tomorrow.. but of course they won’t know and can’t know.

edward bernaise invented the term: public relations – the intelligent manipulation of the masses is an invisible govt which is the true power

first propaganda – let’s scare the hell out of people.. not about facts anymore.. facts don’t matter.. about bending the will of people

problem with embedded journalism.. all you’re seeing is viewpoint of tro0ps.. never the civilians

1:17 – money and money making at the heart of war and getting worse – Julian

1:34 – propaganda relies on us.. the voice of people not power

agents of people not power

John Richard Pilger (born 9 October 1939) is an Australian-British journalist based in London. Pilger has lived in the United Kingdom since 1962.

Since his early years as correspondent in the Vietnam War, Pilger has been a strong critic of American and British foreign policy, which he considers to be driven by an imperialist agenda. The practices of the mainstream media have also been a theme in his work.

His career as a documentary film maker began with The Quiet Mutiny (1970), made during one of his visits to Vietnam, and has continued with over fifty documentaries since then. Other works in this form includeYear Zero (1979), about the aftermath of the Pol Pot regime in Cambodia, and Death of a Nation: The Timor Conspiracy (1993). Pilger has long criticised his native country’s treatment of indigenous Australiansand has made many documentary films on this subject including The Secret Country (1985) and Utopia(2013). In the British print media, he has had a long association with the Daily Mirror, and wrote a regular column for the New Statesman magazine from 1991 to 2014.

The book I am launching tonight, The WikiLeaks Files, is an antidote to a fascism that never speaks its name.

it says that we need not accept these the daily lies. We need not remain silent. Or as Bob Marley once sang: “Emancipate yourself from mental slavery.”

if govts won’t help them.. why can’t they leave them alone

since 1945 the us has attempted to overthrow 50 govts many of them democracies in process.. 30 countries have been attacked and bombed causing loss of countless lives

4 min – my interest in journalism.. started at age 10.. i delivered papers.. and i loved it.. the newspapers.. the romance of papers.. then hs in sydney.. with a friend.. i started a paper.. called .. the messenger

then from hs to apprentice as cadet journalist.. 3-4 yrs learning craft of journalism

60s.. type of journalism i wanted to do emerged.. i was allowed to travel the world and report about its changes.. first assignment: youth in action.. finding young volunteers that were helping people

7 min – journalism often goes for people at the top.. i feel it should go for people.. if not at the bottom.. just people.. generally..

9 min – my first film – the quiet mutiny.. (on nam) intro’d me to the effect of tv.. because all hell broke lose after than film..

11 min – there is something really absurd about wars.. they don’t have a logic.. they take on this momentum.. this craziness of their own

i believe words should be used.. the kind of words that are consciously not used in so called mainstream reporting.. such as the word: imperialist.. war on terror perfect ie of imperialism.. which war on terror.. most terror is state terror..

14 min – i think journalism is essentially about humanity.. it’s about memory.. ensuring that we don’t forget.. and that has always interested me.. to go after (rather than before) the story.. that’s where truths are to be found

17 min – if anyone needs any convincing about palestine.. they should just go visit a checkpoint.. any checkpoint..

18 min – politics is a major ie of the word we didn’t have 20 odd years ago and that’s marketing.. obama is a complete creation of marketing.. he’s a brilliant marketing exercise…

19 min – edward bernays: public relations and or marketing is an invisible govt.. when people understand the nature of that invisible govt they’ll really will understand more about how power works

basic question..what do we ask/demand of powerful govts.. in relation to middle east.. that they get out of other people’s countries..

21 min – in iraq.. almost 10 yrs of extraordinary isolation .. imposed by un and enforced by america and britain.. have killed more people than the two atomic bombs dropped on japan.. including 1/2 mill children..

sometimes.. objectivity is used.. but very little has to do with truth.. rather propaganda.. i think you can be objective… there’s not point in not be.. you can’t be objective as far as injustice is.. you can’t be..

23 min – as long as journalists keep reminding themselves.. that they are there really to rep their viewers/readers/listeners.. not the people who seek to control them.. then i think you have real journalism..

24 min – truth is a difficult word.. there are many truths and many versions of the truth… the truth is there.. many truths.. you’ve got to find it and report it..

Important comments by @johnpilger on @guardian:
‘My written journalism is no longer welcome in the Guardian which, three years ago, got rid of people like me in pretty much a purge of those who really were saying what the Guardian no longer says any more.’ https://t.co/b2ahWboYhGhttps://t.co/h1aw5UYrQJ

the public arena has been so appropriate by invested interests.. whistle blowers are the heroes of our time

John Pilger (@johnpilger) tweeted at 5:09 AM – 3 Sep 2018 :
As one who reported the American assault on Vietnam, its atrocities and deceit, and the heroism of its defenders, including the young often all-women anti-aircraft crews that brought down the likes of John McCain, I recommend the following piece:
https://t.co/FZJHXaB6b6 (http://twitter.com/johnpilger/status/1036571889458704384?s=17)

she recast Vietnam, America’s most brutal and barbaric war, as a noble fight “for the life and liberty of other people’s in other lands”.

John Pilger (@johnpilger) tweeted at 3:20 AM on Sun, Aug 23, 2020:
My film, The Dirty War on the NHS, is now available to watch, free – https://t.co/NQn87bIwmM. First broadcast last December, it foretold the willful disabling and privatising of Britain’s pioneering health service, leaving it unable to cope with Covid. And this vandalism goes on. https://t.co/UhfW1R9AV4
(https://twitter.com/johnpilger/status/1297463641080508424?s=03)