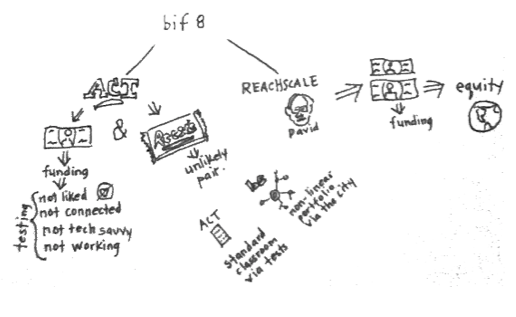 David Wilcox is the founder of ReachScale, an organization that aligns the social responsibility goals of corporations with high potential social entrepreneurs working in areas of common interest.

1) Simple truths are becoming self evident

2) Critical resources are often just out of reach

me hacking at a great post by David – on innovation – scaling entrepreneurs.

His desire for global equity is a huge connect.

I write for CSRwire and focus on Social Enterprise. We also advocate that corporations, governments and NGOs scale social enterprises to solve some of the world’d challenges. In both capacities I participate in around 35 conferences per year.
Social Entrepreneurship or Social Innovation? Not the Same Thing http://bit.ly/NtbPqk  was the second most read post at CSRwire for all of 2012.
I recently covered the Council on Foundations, World Health Care Congress and Skoll World Forum on Social Entrepreneurship—all provided press access. At the WHCC I moderated the panel on Rise of Social Biz Models in Global Health with Mohammed Yunus and the CEO of Kaiser Permanente, George Halvorson.
Changing Business As Usual: 3 Questions for Nonprofit & For-profit Innovation Leaders http://bit.ly/13G0mwj which grew out of those events was the most read post @CSRwire for May this year.

at closing comments – david mentioned testing (per zoom call – meant testing models) in india 5x cheaper.. so could be model for rest of world..

imagine if india modeled something legit new.. rather than the same enclosed systems (ed, health, econ, et al) with some twist.. all that has been proven/tested to not work at scale.. no? that’s all we’ve been doing.. we’re experiencing a rare global pause.. a perfect opp to scale/leap.. and we’re missing it

imagine if we just focused on listening to the itch-in-8b-souls.. first thing.. everyday.. and used that data to augment our interconnectedness.. we might just get to a more antifragile, healthy, thriving world.. the ecosystem we keep longing for..