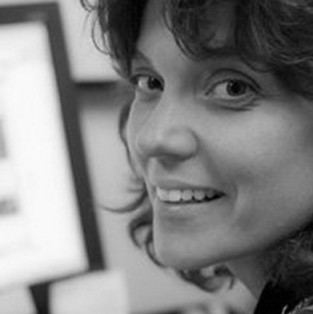 First intro to Connie, was the dml conference 2012, loved her provocations.

The came Nic’s string of videos with the connected learning (dml ness) people.


Connie  was Director of Ed for MacArthur:

And, among many places, you can also find her on Huffington Post: 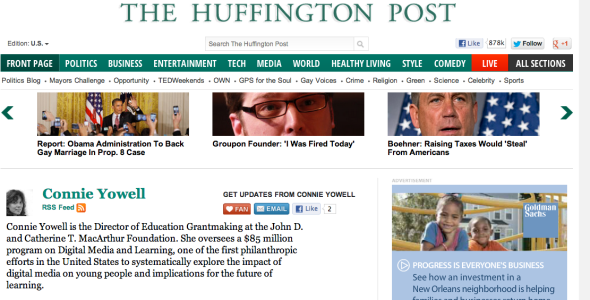 interview with Jeff Brazil – w/launch of connected learning alliance.. may 2014:

various notes from taking her in:

via
keynote-kickoff-connie-yowell/peer culture
interest
academic spheresounds quite simple, but incredibly difficult to implementnot only are kids learning 21st cent skills but also common core that we care about (?)connected learning is not:
kahn academy et al as the answer – that’s not the digital media we’re talking aboutwhat we’ve learned from spending time with kids online
media usage study – 7-8 hrs a day – when multi-tasking – could count as 10 hrs a day
we’re concerned much less with hrs and much more with – what are they doing… 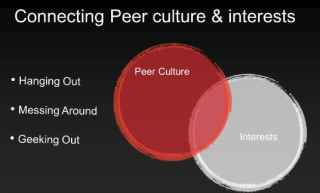 first place we turn to for spaces for playing and tinkering… libraries.. youmedia

StudentSpeak Webisode 15 from Spotlight on Vimeo.

main question…
what is the experience we want youth to have… what is the roll of youth, adults, digital media

can it maybe be – what is the experience each person wants to have? could we even simply – facilitate curiosity from within?

what curriculum and pedagogy can look like if we bring two extraordinary worlds together
quest to learn:

designed to leverage the digital lives of kids.. game-like learning
game design is this generations mode of discourse

above – core assumptions about innovation – via mit media lab
love this

how do we integrate this
it’s not clear to me that that can only happen in schools – learning everywhere – learning through networks…
network the informal world..

how do you use a connection between in and out of school to create safe spaces for adults to learn..
it’s not clear to me that we have these spaces for educators either

we need a new narrative.. indeed..

oh my. i love your thinking Connie..
we need to hear you more..

on connected learning dot tv
group doc macarthur – chicago
MacArthur Foundation: http://www.macfound.org/
give out 280 mill/yearnational and global1980 on – focus on public ed
up until 2005 – it was school reform..
since then – how to reimagine learningshift – was away from focus on core outcomes
rather establishing core questions
change from talking about ed to talking about learning – which realizes that learning happens everywhere
really wanted to understand learning from users perspective rather than institutional outcomesmacarthur is now 100 mill into researchlearning most robust when we focus on 3 areas:
peer, interest, academic/civic/career success

still 200 yrs later.. same goals.. may look dramatically different however..
and to do that with a value set of equity at the forefront

speakers of 21 last sessions – that address these

onbarilone: The HIVE Fashion Project:http://explorecreateshare.org/2012/07/20/next-seasons-hottest-trend-hive-fashion/
ChrisLarry: More Hive Fashion:http://explorecreateshare.org/2012/08/09/dreamyard-fashion-week-in-the-bronx/
ChrisLarry: DreamYard is a YouMedia in NYC
hive – can we through grants, bring the institutions on the ground with online so that they become part of a networked fashion
institutions – are part of an innovation community

Schools are a “node in [students’] broader network of learning” -Connie

Question from Brad: “Checking my understanding. I’m hearing a lot about the macro-features of connected learning and am trying to ground it in the micro.  Is it possible for connected learning to take place without fundamental transformations in power relations between youth and adults? It seems that a fundamental contradiction in Learning 1.0 is that youth are seldom acknowledged interactively as knowledge-holders. I’m trying to weave the macro and micro aspects of the connected learning concept to imagine how it can transform Learning 2.x “
aggregating resources here: http://groups.diigo.com/group/connected-learning

my notes as i listened the first time:

might curiosities always sit at the heart of an extraordinary education….?

how do we create these experiences?

are they not already in life? can’t we trust that?

perhaps there’s a nother way… ie: hosting-life-bits via self-talk as data.. as the day [aka: not part\ial.. for (blank)’s sake…]

watch on dml site, and find 5 other videos via dml and nic askew

I loved it… until around minute 4. Maybe she isn’t meaning like it like this, but it sounds like the usual educational gamification hoopla to me. I know my kids learn a lot through gaming, but…

Those games that are designed specifically for learning certain things are no better than a teacher giving a full-sized candy bar as a prize for accomplishing some task. I’m not saying that because I have a problem with *candy bars* — I’m saying that it’s still for some external reward, and thus unlikely to make a lasting impression on learning. And, the situation was usually put into the context of some goofy contrived frame of reference that a child would never experience in real life. Like (taking her example of fractions), “To get to level two, we need to cooperate and get all eight pieces of the pie! Oh, we only have two pieces, that is one quarter! We still need six pieces, or three quarters!!”What about cooking in the kitchen, and you can’t find the 1/2 cup measure — so you eyeball it with a third of a cup, or two fourth cups, or whatever — and your cake or bread comes out dry and crumbly? Then, a person is more inclined to think, “Heck! I better find that half cup measure next time. I think I added too much flour…”And then, around six minutes, she talks about how we’re looking at what kids are doing, separately from content. And she’s talking about “designing” the content so it is something they will like. I think that’s where it has gone wrong. I think there are plenty of things already out there for kids to like in life outside of school, and they need freedom, and THE ONUS IS ON US AS ADULTS TO BE CREATIVE AND SEE THE WORTH IN WHAT THEY ARE ALREADY DOING, INSTEAD OF TRYING TO SUPERIMPOSE VALUE ON THEIR ACTIVITIES, BY CONTROLLING THE CONTEXT.

A good example is Minecraft. Here’s an article Ken sent us last week:
http://qz.com/32868/could-minecraft-be-the-next-great-engineering-school/
It’s a sandbox, much the way life is.

from the article – loving:

Minecraft has become a kind of anarchic massive open online course (MOOC) all on its own, without developing courseware or costly new program licenses. Part of the proliferation is due to user-created video, particularly on YouTube, where a quick search yields 7.5 million mentions.

Our future is brilliant. You see, together, we are turning the tide.

I have always been in awe of his ability to listen so keenly to the youth, to understand their world, to create safe and inviting spaces for them, and enable their critical and thoughtful and creative voices;

Within a year of opening, Brother Mike, Taylor Bayless, and Erica Neal had developed and implemented what would become the YOUmedia (so named by the youth) signature projects: One Book One Chicago, Digital City Planner, Lyricist Loft, and the Mark Bradford Project.

At a time when youth violence in Chicago was drawing national headlines, youth from all over the city were coming to find a safe haven, a place for creativity and voice, and a trusted mentor — someone who nudged, prodded, guided and celebrated them as they danced, veered, ducked or ran headlong toward adulthood.

His ability to own the culture and artistry of the street, to deeply know, listen and understand youth, and to create opportunities for them to explore identity and culture and build skills while truly making…revolution indeed. That was his word. And, in his case, it applied.

We have become fond of saying that Brother Mike could turn a moment into a movement.

And he didn’t transcend age, race, gender, class, sexual orientation — he connected them. He did it through listening, inspiring, guiding, and most importantly — as he would say — letting you know you were loved.