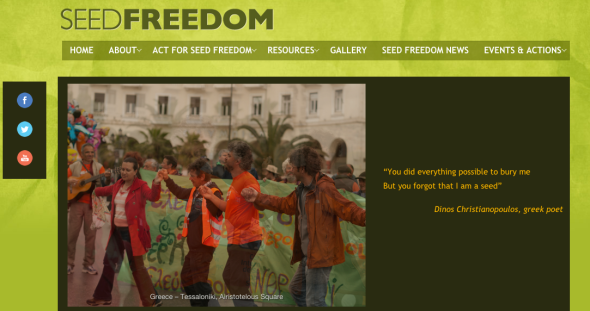 from their about page:

Seed, Bija in Sanskrit, Shido in Japanese, Zhangzi in Chinese, Semi in Italian, Semilla in Spanish, Semence in French, Der Saat in German, is the source of life and the first link in the food chain. Control over seed means a control over our lives, our food and our freedom.

Corporations like Monsanto have created a seed emergency, a seed emergency through patents on seeds, seed monopolies, biopiracy genetic engineering and creation of non renewable sterile seeds. Seed monopolies have pushed 250,000 farmers to commit suicide in India. After contaminating farmer’s seeds and crops, Monsanto sues farmers “for stealing their gene”, putting the polluter pays principle on its head, and making it the polluter gets paid principle.

The multidimensional emergency created by patents on seeds and GMOs needs a global collective response. Join the Global campaign on Seed Freedom to stop the corporate hijack of seed and with it, the hijack of our freedom and our future.

makes me think of the dancing ness in rosewater…

Looking at the New Yorker on GMO’s via Michael Spector, who did the hatchet job on Vandana – one absurdity after another
__________

1- the rediscovery of the commons

during the green rev in 60s and 70s.. govts and foundations in the west made a big push to intro large scale commercial rice and wheat production in so called developing countries. this helped mitigate hunger in the short term, but also intro’d crops alien to many indian ecosystems.. and that require harmful/expensive pesticides.. also more vulnerable to drought and volatile market prices.. widely blamed for an epidemic of 200 000 farmer suicides over the past decade

the women of erakulapally discovered the traditional crops are far more ecologically suited to semi arid landscape .. but to recover the old biodiverse ways of farming.. the women had to ask their mothers and grandmothers to search for dozens of old nearly forgotten seeds.. eventually, in attics and family safe boxes, they found enough seeds to do a planting, and finally, after many additional rounds of cultivation, revive their traditional ‘mixed crop’ agri..  planting 6 or7 diff seeds in same field which act as a kind of ‘eco insurance’..  no matter if there is too much or too little rain.. or too early/late.. some of the seeds will grow.. families will have enough to eat no matter the weather.. .. no need to buy expensive genetically modified seeds or synthetic pesticides and fertilizers

the recovery of traditional agri did not come thru ‘tech transfer’ or govt sponsored agri research . it came thru a do it yourself process of recovering the ‘people’s knowledge’ and deliberately encouraging social collab and seed sharing..

already in us.. holmgren indigenous law

‘our seeds our knowledge’.. every seed is a capsule of their knowledge.. no one is allowed to by or sell seeds; they can only be shared, borrowed or traded