intro’d to him via Paul Tough’s how children succeed.

intrigued by his take on GED.

ie: kids could get same scores, but kids with high geds seemed to have less grit to Heckman.. from the findings that less of them went on to college:  from Tough’s book p. 146:

Heckman found that at age 22, 3% of GED recipients were enroleed in a 4-yr uni or had completed some kind of post secondary degree, compared to 46% of high school graduates. he said, when you consider all inds of important future outcomes – annual income, unemployent rate, dicvorce rate, use of illegal drugs – GED receipents look exactly like high-school dropouts, despite the fact that they have earned this supposedly valuable extra credential, and despite the fact tha they are, on average, considerably more intelligent than high-school dropouts.

what was missing from the equation, heckman concluede, the psychological traits that had allowed the high-school graduates to make it through school. those ttraits – an inclination to persist at a boring and often unrewarding task; (serious? oh my.) the ability to delay gratification; the tendency to follow through on a plan – also turned out to be valuable in college, in the workplace, and in life generally. as heckman explained in one paper: inadvertently, the ged has become a test that separates bright but nonpersistent and undisciplied dropouts from other dropouts. ged holder, he wrote, are wise guys who lack the ability to think ahead, persist in tasks, or to adapt to their environments.

what the ged study didn’t give heckman was any indicaion of whether it was possible to help children develop those so-called soft skills. his search for an answer to that question led him, almost a decade agao, to ypsilanti michigan, an old industrial town west of detroit. ….perry pre school.

so imagine we get ourselves thinking in a different realm of success. perhaps these findings are lovely (perry pre school, ie: from the book: the perry pre school project,… worked entirely different than everyone believed. they had planned to do this to raise iq scores of low-income kids.. but didn’t do much toward that..but did improve behavior and social skills.. which they are saying – turned out to be very valuable..)

it seems a big project he is currently a part of – is this?

5:30 – personally – not interested in metrics listed as accolades (from perry pre-school 40 yr research) – until it got to family matters. what if we keep focusing on age of literacy, hs graduation, paying job, … and that’s what’s distracting us from betterness. what if that’s not in our best interest as human beings..? what if..

9:25 – again – success as going to college – via http://en.wikipedia.org/wiki/Abecedarian_Early_Intervention_Project study

21:45 – sounds like what we do in a city – when ie: highschools vie for students

25:37 – shoot – based on standardized tests…  so this is good to see the above – not a disability – imagine.. just imagine – if we didn’t base these improvements on school math, et al, that most people will never use, imagine we based it on curiosity.. that’s it. daily curiosity..

28 – maintaining at the top of what..? better perhaps.. but betterness?

[bad/good/indifferent – my thoughts while reading through the credits.. how much was spent on this..? and is that so very different than kony..? it’s just so easy to point a finger – when it’s someone else..]

Are We Crazy About Our Kids? (32 minutes) is one of the supporting episodes to the forthcoming documentary series, The Raising of America: Early Childhood and the Future of Our Nation, now in production.

Science has demonstrated that a child’s experiences during the earliest years are vital to building the foundation for life-long individual success — in school and in life.

Studies by Federal Reserve economist Arthur Rolnick, Nobel laureate James Heckman and others conclude that high quality early care and pre-school yield huge individual – and public — benefits. Participants in Perry Pre-School, Abcederian and the Chicago Child-Parent Centers were more likely to graduate high school and college, get better jobs and contribute more in taxes; less likely to abuse drugs or alcohol, be unemployed, go to jail or incur other social costs. The return on investment? Six dollars to one, or more.

Are We Crazy About Our Kids? also travels to Quebec which rolled out a novel jobs and anti-poverty program: they introduced universal early care and preschool (from birth to age five) available to all parents at a cost of $7 a day, along with paid parental leave and other family supports.

Back here in the U.S., child care remains largely haphazard, unregulated, and unaffordable for most. Many states have even cut back funding. But pilot programs continue. A pre-school initiative in Salt Lake City has closed the achievement gap between rich and poor, reversing a 30 year national trend.

High quality child-care and preschool is just one piece of the solution. But economists are clear about the equation: Our system is paying for failure, rather than investing in success.

The question is — what will we do about it? How crazy are we about our kids?

The Raising of America aims to reframe what we as a society can — and should — do to make a nurturing child ecology the birthright of all infants.

Use “Are We Crazy About Our Kids?” as a media tool to engage your colleagues, friends, students and others about the importance of giving all our children a strong start in life. 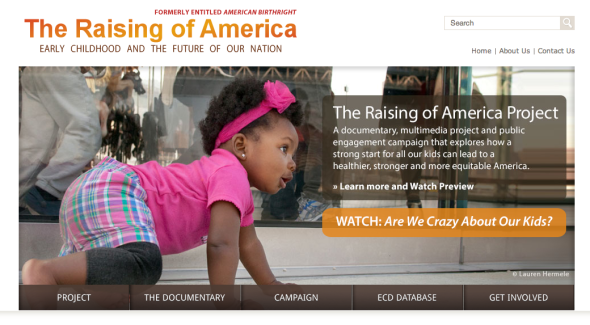 approving the ability to self-regulate

what if that’s not a good metric?

7:23 – it’s not always that something is better than nothing – have to be careful

if we don’t become more educated we are going to fall behind..