Solutions to complex problems can be simple says Jack Andraka

Jack Andraka is a 15-year-old Maryland high school student who has invented an inexpensive and sensitive dipstick-like sensor for the rapid and early detection of pancreatic, ovarian, and lung cancers. He recently won the Gordon E. Moore top prize at Intel International Science and Engineering Fair as well as the Google Thinking Big Award for the project, addressing a large and seemingly impossible problem and finding an elegant solution with broad impact.
Jack is a member of the National Junior Wildwater Kayak team and has won numerous awards in national and international math competitions.

resonates with scenarios for curiosity app.. no? –

4:45 – smuggle in an article (sounds like Hewson‘s experiences) – [imagine if the app connected Jack and Angela and/or ? – and we called that school]

to me, that’s just kind of socially unacceptable..

we first met Jack via this interview with Melissa Jun Rowley

Melissa is spear rodding Magic Maker (a project to showcase the brilliant youth that are changing the world – imagine if we redefine public ed – to simply facilitate curiosities – and we unleash 7 billion people – any age – to do just that.

Kosta and Jack on Aljazeera:

Andraka’s breakthrough nearly didn’t happen. He asked around 200 scientists for help with his research and was turned down every time.

Luckily he eventually established contact with a Dr. Anirban Maitra, a Professor of Pathology and Oncology at Johns Hopkins University, who provided him with lab space and served as a mentor during the test’s development.

“I soon learned that many of the papers I was interested in reading were hidden behind expensive paywalls. I convinced my mom to use her credit card for a few but was discouraged when some of them turned out to be expensive but not useful to me. She became much less willing to pay when she found some in the recycle bin!”

…I would love to see research that is publicly funded by taxes to be publicly available. It would make it so much easier for people like me to find the information they need. If I can create a sensor to detect cancer using the Internet, imagine what you can do”.

posted on fb by upworthy (yeah.. we’re missing it.. by not setting 7 billion free): 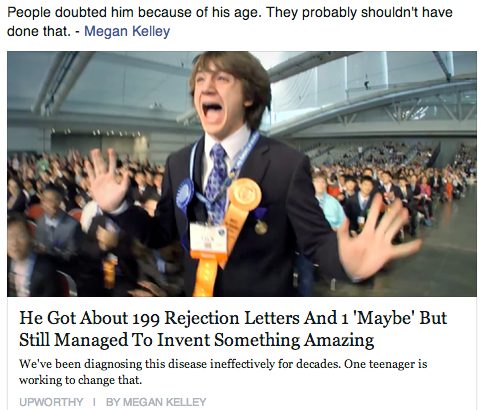 Cory Doctorow mentions Jack at the end of Aaron‘s – the internet’s own boy… in this regard:

Now Andraka has set his sights on developing breakthrough biosensors for health care and biology. Andraka is focusing on tuberculosis diagnostics and environmental screens.

“My vision is a paper strip that would be dipped in water and change color to detect heavy metals, pesticides, or other toxins,” he says. “A smartphone would take a picture of the strip, analyze it, and instantly correlate the amount of color change with how much contaminant is present. I love the outdoors and was on the National Junior Wildwater Kayak team, so problems like water pollution and air quality really interest me.”

Andraka also works with the Right to Research Coalition, advocating for legislation to allow free and open public access to all U.S. federally funded scientific research.

“Currently, you have to pay for most journal articles,” he notes. “These paywalls are a real hurdle if you’re young or disadvantaged. A brilliant discovery may be out there in the brain of someone with inadequate resources. Open access will tap ideas from 5.5 billion people who have previously been cut off.”

6 min – meant as a screening test…

11 min – don’t think you need adversity to be creative.. just need to nurture what you have

12 min – on science being like a 2nd home (during depression)

13 min – don’t let a single cruddy moment define you.. don’t let others keep you from your passion

20 min – going to stanford this fall

21 min – on how you switch fields.. i get bored with a subject…  so the internet helps that.

23 min – we’re teaching stem in a terrible way.. it’s all about using curiosity… we have this bulimic learning model… we need to learn by doing.. independent projects foster this. we need to go beyond maker movement – bio maker movement

26 min – one of issues i care the most about: open access

mixed message – when science articles cost $35… the next cure to cancer, et al, might be in the mind of someone who can’t afford that.. 5.5 billion people right now can’t access…

27 min – aaron was definitely one of my idols.. access to info should be a basic human right

28 min – i don’t think patents are agains open access – if you’re doing it for research it’s free.. if using for profit.. then have to pay

30 min – on ethics.. have to keep humanity in mind.. and implications of research..

31 min – always be true to yourself.. your gut.. i have this internal mission – researching and helping people

are we listening…? red tape. cancer.

one of greatest difficulties… science behind paywalls

the minds of people must be free.. everyone.. not a select few that have money for journals..

17 min – asked what is the red tape: institutions own samples.. and they cost tons..  sometimes $7000/sample… money and i have to go w/a company to get licenses..

jack – I didn’t feel like googling it, so I did an experiment.

adora—I think that’s the only time a human has ever said that.

finding all the geniuses inside.. waiting to be seen/heard/loved.

and imagine if we called – facilitating curiosity – school – in the city – as the day?

7 billion such researchers/entrepreneurs/happy people.. no?