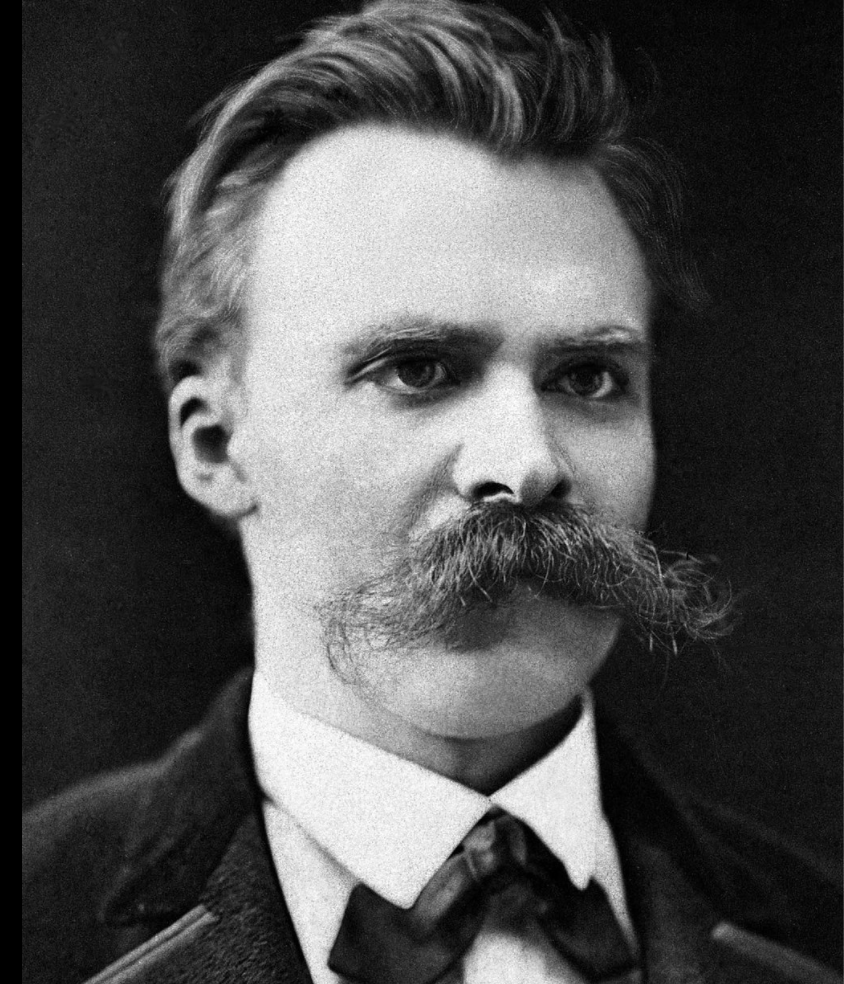 adding page this day.. so totally going off Paul Mason‘s perspective (in this excerpt from clear bright future).. have read so many references to him.. this (right or wrong) succinct

But no matter how many progressive causes she espoused, hers was a worldview tainted by admiration for the reactionary German tradition in philosophy begun by Friedrich Nietzsche.Nietzsche taught the German bourgeoisie of the late nineteenth century that its fantasies of empire and volk were more valid than the working-class project of collaboration, equality, and a human-centered society. Morality is a sham, he said, and the most honest thing to do is to pursue your own self-interest by any means necessary.There is no purpose to human existence, such as the “good life” imagined by Aristotle, and so no set of morals or ethics can be derived from it.

Nietzsche would become the cult figure of neoliberalism. Once human beings are reduced to two-dimensional, selfish, and competitive individuals—in a world where “there is no such thing as society,” as Margaret Thatcher once put it—the only logical response is to cast yourself as one of Nietzsche’s supermen: the alpha male, the ruthless manager, the financial shark, the pick-up artist.

Arendt certainly drew different moral conclusions from those of Nietzsche, but she could never see him or the philosophical tradition he gave birth to as the progenitor of Nazism. Indeed, she went out of her way to absolve him of responsibility for Hitlerism. To her dying day, she remained in awe of Nietzsche’s leading pro-Nazi follower, and her one-time lover, the philosopher Martin Heidegger.

For us, understanding the philosophical through-line from Nietzsche via Hitler to the American neocons of the Iraq era and the alt-right of today is critical. Nietzsche is the all-purpose philosopher of reactionary politics. He says to the middle-class mind, dissatisfied with managerial conformity, that there is a higher form of rebellion than the one proposed by socialists, feminists, and other progressives: an individualist rebellion against morality, in favor of oneself.

He tells the elite that elites are necessary, and he is brutally honest that this demands a form of social apartheid in which most people perform “forced labor.” He decries state intervention, just as the modern right does, and advocates “as little state power as possible.” He is appalled, of course, at the possibility of working people using taxation to redistribute wealth. Nietszche, instead, idolizes the “criminal type”: all the gangster lacks to be a superhero, he says, is “the jungle, a certain freer and more dangerous form of nature,” in which he can demonstrate that “all great men were criminals and that crime belongs to greatness.”

Nietzsche greeted the rise of European imperialism with the words: “A daring master race is being formed upon the broad basis of an extremely intelligent herd of the masses.” What that master race needed was freedom from social norms and religious morals, so that they could become “the kind of exuberant monsters that might quit a horrible scene of murder, arson, rape and torture with the high humor and equanimity appropriate to a student prank.”

Any reading of what Nietzsche actually said, in the context of the rise of the German labor movement and the birth of German imperial ambition, should leave any humanist, democrat, or supporter of human rights reeling in disgust. But he did not repel Arendt.

The Scottish philosopher Alasdair MacIntyre once wrote that there is something logical in the repeated rediscovery of Nietzsche and his superman theory. Whenever the capitalist order comes under stress and the rule of the elite is challenged, the ordinary morality that rich people profess is called into question. Repression, deviousness, lies, and even murder become the order of the day. At these critical moments, the ordinary, boring bureaucrats discover that their norms and morals were just a jumble of old rules without any logical underpinning. Because of this, wrote MacIntyre, “it is possible to predict with confidence that in the apparently quite unlikely contexts of bureaucratically managed modern societies there will periodically emerge social movements informed by just that kind of prophetic irrationalism of which Nietzsche’s thought is the ancestor.”

That is exactly what we are living through now, and Arendt’s thought cannot explain it—because she refused to understand fascism as the elite’s response to the possibility of working-class power, or to understand the essential role of irrationalism in all such reactionary movements, and because hers was a philosophy based on American exceptionalist assumptions of immunity to totalitarian impulses.This is sadly disproved.

Arendt’s optimism about postwar America stemmed from her belief that people can learn to take self-liberating actions, learn to distinguish good from bad, and the ugly from the beautiful. But if you share her optimism—and I do—then you are now up against a very dangerous opposing force.

In this context, the rediscovery of Hannah Arendt and the humanism of the 1950s is not enough.

We need a humanism that can resist the re-establishment of biological hierarchies and root instead the universality of human rights on *more solid foundations than the ones currently under attack.

This project will need to survive contact with the new challenge of thinking machines and the new ideology of machine control known as post-humanism.

every afternoon in copenhagen.. k never seemed to walk straight – he zigged/zagged, crossing the street w/o notice, trying to always remain in the shade. when he had either worn himself out, worked thru what he was struggling with, or been struck w a good idea, he would run around and make for home, where he would write for the rest of the day.. walking was how he released the stress and frustration that his philosophical explorations inevitably created to his sister in law, who was often bedridden and depressed as a result, k wrote of the importance of walking.. ‘above all’ he told her in 1847 ‘do not lose your desire to walk: every day i walk myself into a state of well being and walk away from every illness; i have walked myself into my best thoughts, and i know of no thought so burdensome that one cannot walk away from it’ k believed that sitting still was a kind of breeding ground for illness. but walking, movement, to him was almost sacred.. it cleansed the soul and cleared the mind in away that primed his explorations as a philosopher.. life is a path, he liked to say, we have to walk it.. 193 while k eloquent in his writing about walking.. he was by no means alone in his dedication to the practice.. tesla, hemingway, darwin, jobs, tversky, kahneman, king jr, whtiman, grant, .. freud, composer mahler spent as much as four hours a day walking to jot down ideas..  beethoven carried sheet music and writing utensil on walks for same reason.. , dorothy day, jesus, 194 how does walking – activity – get us closer to stillness..? yes, in motion, but not frenzied/conscious motion.. it’s repetitive, ritualized motion.. deliberate.. an exercise of peace 195 key to a good walk is to be aware/present.. breathe.. consider who might have walked this very spot in the centuries before you

196 feel the unfamiliarity, get lost, be unreachable. go slowly.. it’s an affordable luxury available to us all

researchers at stanford have found that walker perform better on tests that measure ‘creative divergent thinking’.. treatment for depression

ugh to the tests..

197 in our own search for beauty and what i s good in life, we would do well to head outside and wander around..

Friedrich Wilhelm Nietzsche (/ˈniːtʃə, ˈniːtʃi/, German: [ˈfʁiːdʁɪç ˈvɪlhɛlm ˈniːtʃə] 15 October 1844 – 25 August 1900) was a German philosopher, cultural critic, composer, poet, philologist, and Latin and Greek scholar whose work has exerted a profound influence on Western philosophy and modern intellectual history. He began his career as a classical philologist before turning to philosophy. He became the youngest ever to hold the Chair of Classical Philology at the University of Basel in 1869 at the age of 24. Nietzsche resigned in 1879 due to health problems that plagued him most of his life; he completed much of his core writing in the following decade. In 1889 at age 44, he suffered a collapse and afterward, a complete loss of his mental faculties. He lived his remaining years in the care of his mother until her death in 1897 and then with his sister Elisabeth Förster-Nietzsche. Nietzsche died in 1900. Nietzsche’s body of work touched a wide range of topics, including art, philology, history, religion, tragedy, culture, and science. His writing spans philosophical polemics, poetry, cultural criticism, and fiction while displaying a fondness for aphorism and irony. His early inspiration was drawn from figures such as Arthur Schopenhauer, Richard Wagner, and Johann Wolfgang von Goethe. Prominent elements of his philosophy include his radical critique of truth in favor of perspectivism; his genealogical critique of religion and Christian morality and his related theory of master–slave morality; his aesthetic affirmation of existence in response to the “death of God” and the profound crisis of nihilism; his notion of the Apollonian and Dionysian; and his characterization of the human subject as the expression of competing wills, collectively understood as the will to power. He also developed influential concepts such as the Übermensch and the doctrine of eternal return. In his later work, he became increasingly preoccupied with the creative powers of the individual to overcome social, cultural and moral contexts in pursuit of new values and aesthetic health. After his death, his sister Elisabeth became the curator and editor of Nietzsche’s manuscripts, reworking his unpublished writings to fit her own German nationalist ideology while often contradicting or obfuscating Nietzsche’s stated opinions, which were explicitly opposed to antisemitism and nationalism. Through her published editions, Nietzsche’s work became associated with fascism and Nazism; 20th century scholars contested this interpretation of his work and corrected editions of his writings were soon made available. Nietzsche’s thought enjoyed renewed popularity in the 1960s and his ideas have since had a profound impact on 20th and early-21st century thinkers across philosophy—especially in schools of continental philosophy such as existentialism, postmodernism and post-structuralism—as well as art, literature, psychology, politics and popular culture.

169 endnotes: it is interesting to contrast carlyle’s praise of work for freeing the soul from cares to nietzsche, who condemned it for that very reason: ‘in the glorification of ‘work’ and the never ceasing talk about the ‘blessing of labor’ i see.. fear of everything individual.. for at the the sight of work.. that is to say, severe toil from morning till night.. we have the feeling that it is the best police, viz.., that it holds everyone in check and effectively hinders the development of reason, of greed, and of desire for independence.. for work used up an an extraordinary proportion of nervous force, withdrawing it from reflection, meditation, dreams, cares, love and hatred’..