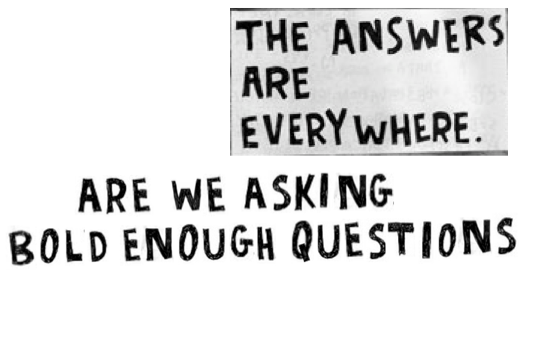 Education, in this sense, is like every other field of social science. You can only ignore the inherent contradictions of a given problem by ignoring the larger antinomies that gave rise to them.

Most educational research relies on measuring imaginary “products”. These are simple and preferably quantifiable representations—test scores being the most common example.

The problem is that in education most imbalances were caused precisely by the administrative attitude that underlies quantitative research: a desire for efficiency, the denial of social complexities, the willingness to eradicate real relationships from human situations and replace them with codified interactions, and the viewing of individuals as isolated statistical bodies.

The point is that while the coordinates of the problem have changed, the equation that describes it has not. Until now, progressive education willfully ignored the social fact of division of labor. Now, it is willfully ignoring the end of labor—i.e., the fact that there is no longer any rational need for eight-hour days. Jobs should be disappearing. They are not of course, and why they are not has a lot to do with patterns of consumption—something that education is equipped to address and almost never does.

Marx correctly identifies the “peculiar difficulty” of education; he is right to insist that any educational theory must address and depart from this paradox. However, Marx’s formulation speaks not only to the educational system, but to the role of education—regardless of the institutional setting—in social transformation. Few people seem to pay attention to the fact that Theses on Feuerbach, which ends with that famous command to philosophers to change the world, begins with a key thought on education:

The need for praxis—what Engels described as “combined action and mutual discussion”—is what dethrones the armchair philosopher. Revolutionary praxis—i.e., active self-divestment and boundary crossing—exiles people to the fringes, gets them fired from their jobs, and worse. In any case, you can’t talk about raising or changing someone else without getting implicated in the problem.

Jacques Rancière—a career philosopher of the critical variety—wrote a book about education in 1981. It’s titled The Ignorant Schoolmaster, and its overarching thesis is that if education is to empower the student, the teacher must become willfully ignorant: she must let go of the notion that she is the possessor of knowledge and skill while the student is an empty vessel. To lecture at people is to do violence

..there is no element of culture (bar sex and family) that implicates us as quickly and directly as does education. No one is shielded from it. Nearly everyone is a practitioner.

If you write about painting, no one asks you to step up and do it differently, because the painter is surrounded by a halo of craft and genius. But if you write about education, and you are a teacher yourself, everyone, including yourself, will have to start wondering. That would disrupt the one-sided, authoritarian, unsound method that theorists, like all their academic friends, use in their classrooms. The lecture would have to suffer. Which would be at least one welcome development.

if equity is everyone getting a go every day.. redefining public education becomes revolution of everyday life.. aka: global equity

The following are some of the acts in the Geneva Conventions, the rules concerning the treatment of captured or wounded solders in war:

Act 17: No physical or mental torture, nor any other form of coercion, may be inflicted on prisoners of war to secure from them information of any kind whatever. Prisoners of war who refuse to answer may not be threatened, insulted, or exposed to unpleasant or disadvantageous treatment of any kind.

Act 53: Prisoners of war must be allowed, in the middle of the day’s work, a rest of not less than one hour.

Act 99: No moral or physical coercion may be exerted on a prisoner of war in order to induce him to admit himself guilty of the act of which he is accused.

No prisoner of war may be convicted without having had an opportunity to present his defence and the assistance of a qualified advocate or counsel.

At least one, but most likely all of them are violated in some shape or form in schools today. Via Cevin Soling, “If children could have declared themselves enemy combatants, public schools would be guilty of war crimes.”

About a dozen years ago, scientists discovered that a hormone called ghrelin enhances appetite. Dubbed the “hunger hormone,” ghrelin was quickly targeted by drug companies seeking treatments for obesity — none of which have yet panned out.

Drugs that reduce ghrelin levels, originally developed to try to combat obesity, could help protect people who are at high risk for PTSD, such as soldiers serving in war, says Ki Goosens, an assistant professor of brain and cognitive sciences at MIT, and senior author of a paper describing the findings in the Oct. 15 online edition of Molecular Psychiatry.

Drugs that reduce ghrelin levels, originally developed to try to combat obesity, could help protect people who are at high risk for PTSD, such as soldiers serving in war, says Ki Goosens, an assistant professor of brain and cognitive sciences at MIT, and senior author of a paper describing the findings in the Oct. 15 online edition of Molecular Psychiatry.

“Perhaps we could give people who are going to be deployed into an active combat zone a ghrelin vaccine before they go, so they will have a lower incidence of PTSD. That’s exciting because right now there’s nothing given to people to prevent PTSD,” says Goosens, who is also a member of MIT’s McGovern Institute for Brain Research.

so it didn’t help obesity to give people drugs that reduce ghrelin levels.. so we’re going to see if it might help with ptsd.

what are people really hungry for?

why are we fighting?

could the two be related?

imagine all the time we spend on trying to fix problems we manufactured, instead being spent on finding asking why we created them in the first place.

maybe we focus too much on knowing about things. and too little on knowing/listening/being.
Stress is a useful response to dangerous situations because it provokes action to escape or fight back. However, when stress is chronic, it can produce anxiety, depression and other mental illnesses.

like school.. where there is tons of chronic stress? not only creating anxiety, depression, mental illness, but shutting down the neocortex..

The research was funded by the U.S. Army Research Office, the Defense Advanced Research Projects Agency, and the National Institute of Mental Health.

1. journalists should those in power accountable, whether demo or repub

2. give voice to the voiceless

3. provide american public with info they can use to make informed decisions

perhaps rather than trying to find a drug to comfort/soothe/appease/protect people from going to war/school, being depression/adhd we can now actually stop the manufactured thing we created.. that’s causing the stress.

the 7bill free people would/will be quite capable of figuring things out.. no?

it’s a starfish world. not a spider world.

we need to decide what kind of starfish we want to be. because whatever we decide, everyday, ends up being unstoppable.