knowledge economy has no scarcity – internet as backbone 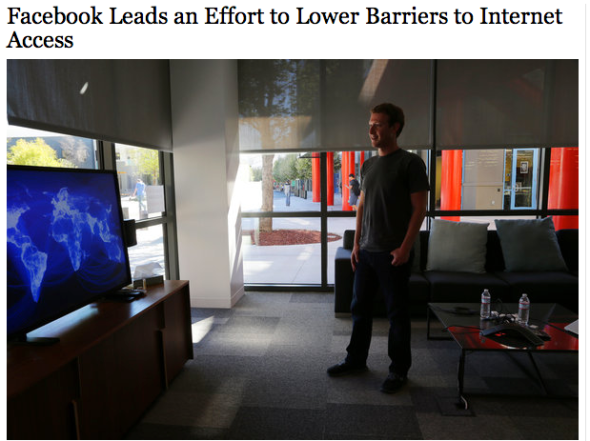 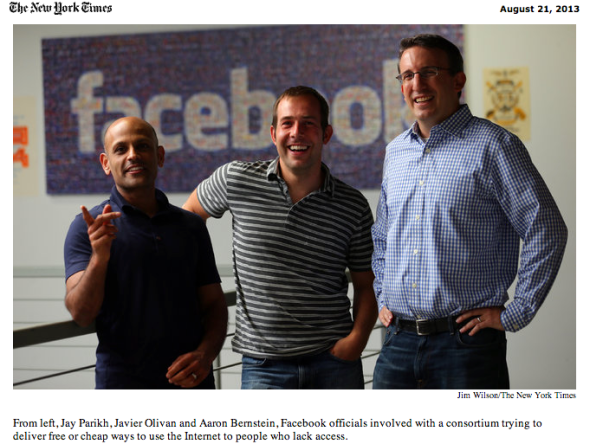 As part of our Internet.org effort to connect the world, we’ve designed unmanned aircraft that can beam internet access down to people from the sky.

Today, I’m excited to share that we’ve successfully completed our first test flight of these aircraft in the UK.

The final design will have a wingspan greater than a Boeing 737 but will weigh less than a car. It will be powered by solar panels on its wings and it will be able to stay at altitudes of more than 60,000 feet for months at a time.

Aircraft like these will help connect the whole world because they can affordably serve the 10% of the world’s population that live in remote communities without existing internet infrastructure.

We’ll talk about this more in a keynote at F8 that starts at 10am Pacific. You can watch at fbf8.com. #f8

The change is intended to better distinguish the app and website from Internet.org

Facebook founder Mark Zuckerberg defended the program, saying it didn’t block or throttle services and therefore didn’t conflict with net neutrality. He said it cost too much to make the entire Internet available to everyone; Facebook’s approach was an economically viable way to bring the Internet to people who wouldn’t otherwise have it. “Net neutrality should not prevent access,” he said in a seven-minute video he made in May. “It’s not an equal Internet if the majority of people can’t participate.”

Meanwhile, through a Google X–like R&D group called the Connectivity Lab, Facebook is developing new methods to deliver the net, including lasers, drones, and new artificial intelligence–enhanced software. Once the tech is built, a lot of it will be open-sourced so that others can commercialize it.

Skeptics see his mission as a play to colonize the digital universe. They question the hubris of an American boy billionaire who believes the world needs his help and posit that existing businesses and governments are better positioned to spread connectivity.

For Zuckerberg, Internet.org is more than just a business initiative or a philanthropic endeavor: He considers connecting people to be his life’s work, the legacy for which he hopes to one day be remembered, and this effort is at its core. Zuckerberg is convinced the world needs Internet.org. The Internet won’t expand on its own, he says; in fact, the rate of growth is slowing.

“There’s no way we can draw a plan about why we’re going to invest billions of dollars in getting mostly poor people online,” he tells me. “But at some level, we believe this is what we’re here to do, and we think it’s going to be good, and if we do it, some of that value will come back to us.”

As 2016 gets under way, Zuckerberg has named the Connectivity Lab’s work one of his three top priorities for the year. He plans to launch a satellite above sub-Saharan Africa by year’s end. The first drone test flights will happen shortly. And Facebook has developed new mapping software that takes advantage of AI-enhanced maps to better determine where people need their phones to work. An on-the-ground deployment team is making its way from Kenyan refugee camps to inland villages to hack together new methods for getting people online.

Zuckerberg wanted the lab to make bigger bets, to think about projects that might take a decade to mature but that could reshape what we know about how the Internet is powered. His rule is that Facebook should work on any project that has the potential to increase connectivity by a factor of 10 or to bring down the price of that connectivity by a similar factor.

Among the ideas that caught his imagination: data that travels by lasers, sent to Earth from drones. These invisible beams of light provide extremely high bandwidth capacity and are not regulated.

We’re trying to get Mark to understand: This isn’t writing code on a laptop and copying it over to a server. There’s, like, physical stuff. There’s chips and radios and high-powered lasers and planes that could fall out of the sky.”

Facebook’s most ambitious connectivity project is being developed in the small industrial town of Bridgwater, three hours west of London. ..

Cox, 53, is in charge of Aquila, Facebook’s passenger jet–sized unmanned aerial vehicle (aka drone). He’s a professorial mechanical engineer who, earlier in his career, built Disney’s Rock ’n’ Roller Coaster. More recently, he was part of the team that set the record for keeping a solar-powered UAV aloft for two weeks.

By the end of 2016, they aim to test a system that will work like this: A ground station will transmit a radio signal to a drone, which will send that signal to other drones via lasers. The fleet will beam those lasers down to transponders within about 30 miles of each craft. These will convert the signal into Wi-Fi or 4G networks. Facebook has not yet determined the data plan or pricing for this offering.

Right now the biggest challenge Aquila faces is regulatory. Facebook has joined with Alphabet (formerly Google) to address bureaucratic obstacles. Its competitor has its own drone effort, Project Titan, incubating under its Access and Energy division. (Project Loon, which aspires to beam the Internet from high-altitude balloons and is part of the Google X lab, is further along than either UAV endeavor and will test a partnership with several carriers in Indonesia this year.)

Facebook responded by changing the name of its app from Internet.org to Free Basics.

Mark we Indians Love you for what you are. We just wanted net neutrality. You don’t know how big cheaters this Telecom Operators are. They don’t have motive of connecting India. They just want to exploit Indians for making profit. If you really wanna help us give us Free Internet and not Free Basics.

Purva Deshpande, “We r all up for your mission of connecting india through internet.. but not at the cost of compromising net neutrality.. please find out better ways tht wrks for every1 n we will support u in your goals.”