intro’d to Yaacov via Isaac. huge.

recent talk on what democratic ed is:

the most beautiful thing we have in the world is that we are different. (discrimination as equity)

the catastrophe of school – you can’t see the uniqueness of everyone.

everyone can be excellent if we give them choice

why come to idec?

the art of collaboration – the dance of change:

a little about Israel, Hadera:

What we learning and further cemented in our minds and hearts after reading Yaacov’s book, hearing his stories, is that this could be a simple change. Up to us.

raw review..
holy cow.
does each book i read really get better? is the order really this divine? or am i just finally drinking in life.. each day.. and that’s how it works..

Emmerson – live ever in a new day.

so Yaacov… wow
what esp resonated were the personal stories:

definitely experienced your 3 types of entry:

agree with what parents/adults need to do:

absolutely get the box within the world that we try to fit everyone in.. outside the box is considered lazy, ridiculous, unworthy, not credentialable – loved where that mayor asked if you believed surfing was worthy of credentialing

huge confirmation that if school wants to be good for people, the world, it needs to be non-compulsory, it needs to do a get-pivot gyration of zooming into an interdependent status for personalization and zooming out to the community/world for generosity

4 basic parts of the spiral of not knowing:

i want to go to Israel. i want to see Yaacov’s eyes. (though i feel i have.)
i want to hug Elad. i want to embrace his mom.

so … i will do all of that here.
we’re doing that here Yaacov. we love your voice and your story and your strength and your commitment to do and to search.
thank you deeply Yaacov. Sheerly.. Yaniv

to Yaacov Hecht (and everyone)after reading this from Yaacov:
sometimes people around me accuse me of inconsistency and feel frustrated when yesterday’s truth disintegrates before their eyes.
sometimes i would rather rest on “safe ground”, to feel like “the winner” who has discovered the truth, to stop searching.
the sense of “unknowing” recharges me every time,
burns in me like a fire that joins the fire of my incendiary comrades.
some are not considered classic stories of success, … but this is exactly why they should be told.i read this from Ralph:
from Self-Reliance via the Domino Project – happy 208th 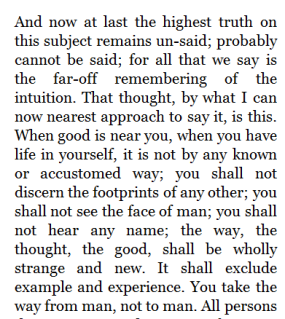 We call this body a “Future Center” — a physical, organizational, community space at the disposal of all the residents and organizations operating in the town, to create a town-wide vision operating according to the principles of a “sustainable community.” The goal of the center was to create a civil system of decision making, connected to the local council’s process of decision making.Implemented in Be’er Sheva1. A place for discourse of “mixing colors” — an opportunity for encounters that don’t usually take place, among people from different fields.2. A “future museum” — future images of the contents3. An “innovation laboratory” — a lab to accelerate innovation and initiative, through creative thinking, fruitful sharing of ideas4. A “learning center” for the development of training programs for teahcers.
http://www.innovationecology.com/papers/future%20center%20for%20an%20educating%20city.pdf
Some of this vision is also written up in Matt Hern‘s Everywhere All the Time – we’ve added some of education cities.

Yaacov is one of idec 2013’s coffee talkers:

Yaacov is the founder of IDEC which took place in Israel for the first time 21 years ago.
He is also the one that coined the term Democratic School when he founded one in his community (the first Democratic School in Israel) Hadera (1987). Along the years, Yaacov have supported the establishment of the network of democratic schools in Israel and around the world.
Yaacov is also the one who founded in 1994 the Institute for Democratic Education in Israel – which is the first democratic teacher education program in the world! he led it until 2010. In 2011 Yaacov founded Education Cities which you can get a glimpse about in this paper by Yaacov: http://education-cities.com/wp-content/uploads/2011/05/article.pdf.