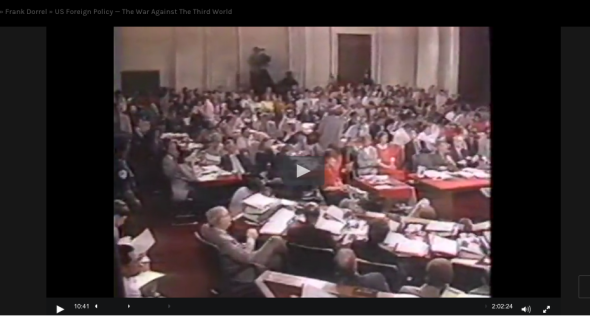 below is cut & pasted – (& edited out some) – from page linked to image above (from thought maybe site), explaining the 10 part series… and interspersed with my notes as i watched..

US Foreign Policy — The War Against The Third World is a video compilation series of 10 segments about CIA covert operations and military interventions since World War II.

injustice anywhere is a threat to justice everywhere… mlk

assassinated 1 yr after beyond vietnam speech

Part 2 — John Stockwell, former CIA Station Chief
Former CIA Station Chief in Angola 1975 working for then Director of the CIA, George Bush. A 13 year veteran of the agency, Stockwell provides a short history of the CIA, estimating 6 million people have died as a direct consequence of the agency’s covert operations since its inception in 1947. This talk was given in the late 1980′s.

we didn’t do this to powerful russia.. who could drop atomic bomb on us.. we did this to places that had no means of defense..

9:03 – john is the highest rankin official ever to leave the agency and go pulbic. he ran a cia intelligence – gathering post in vietnam, was the task-force commander of cia’s secret war in angola in 75 and 76, and was awarded the medal of merit before he resigned. this speech was given in 88. stockwell’s book – in search of enemies”

John R. Stockwell (born 1937) is a former CIA officer who became a critic of United States government policies after serving seven tours of duty over thirteen years. Having managed American involvement in the Angolan Civil War as Chief of the Angola Task Force during its 1975 covert operations, he resigned and wrote In Search of Enemies.

Part 3 — Cover Up: Behind the Iran-Contra Affair
Excerpt from documentary of same name. “The Iran-Contra scandal is not an aberration of US foreign policy. It has been estimated that between 20-30,000 Nicaraguan men, women and children were killed in US sponsored terror conducted by the CIA backed Contra forces.”

scott – real issue.. frightened that the real scandals, ie: drug in future.. so trying to limit damage control.. john stockwell: on claim to necessity of secrecy.. –

chile, nicaragua, honduras, … all counters to fight against govts..

21 min – in honduras.. trying to create the contras… i was invited by cia to be a leader of the contras.. i thought it was a war for a year.. to put pressure on nic govt.. but civilians killed..

not a blood bath.. but killed a few everywhere to invoke terror

cia drug distribution dates back to vietnam.. our allies where the opium growing tribesmen

25 min – weapons trade and narcotics trade were 2 major commodities in the world..

sheehan – major deception.. how long will we be deceived in this manner

Part 4 –School of Assassins
The School of the Americas, located at Fort Benning, Georgia — a terrorist training school in the United States where soldiers from Central and South America are trained in the art of torture and assassination. This school has since officially been renamed “Western Hemisphere Institute for Security Cooperation.”

31 min – san salvador – killing almost 50 a night – archbishop romero: appeal to the special army.. please stop the repression. mass next day.. romero assassinated. document of plan of death.. lottery for who would can right to kill him.. trained at school of americas..

hall of fame at school – hugo bonzer, former dictators of ecuador, argentina, … et al.. cited for human rights violations in their own countries..

many grads later became the contras.. speaker at graduation.. responsible for 200000 guatemalan deaths

this is all being done with our tax money.. being done in our name… joseph kennedy – to close the school..

we who have voice..have to speak for the voiceless..

from woman: don’t give us anymore of your military aide..

Part 5 — Genocide by Sanctions
Excerpt of doc ..from 1998, ..features former Attorney General of the United States, Ramsey Clark, as he shows the terrible conditions the Iraqi’s were suffering from due to the first US invasion in Iraq. …around 5,000 children were dying every month in Iraq after the invasion and the imposition of sanctions placed on that country. Over 1.5 million Iraqi’s died as a result of the sanctions alone. Ramsey Clark goes into the hospitals and talks with Iraqi doctors, who say many of these deaths could have been prevented if they had medicine to give to the children. The United States bombed out their way of life, their water treatment facilities, food delivery systems, sewage treatment facilities, electrical systems, their mass communication facilities and more. US citizens were lead to believe that this was a good thing.

43 min – nov 77 – ramsey starts investigation.. real cause of suffering.. the sanctions. goal to cripple iraq’s infrastructure… w/o ever setting foot on it. woman: couldn’t all your tech tell you that women and children were here…

46 min – ramsey: we didn’t want them to be able to feed themselves for a long long time. death went up 670% – even destroyed access to powdered milk.. today (98) pregnant women in iraq still enemic

ramsey – these situations should not be happening anywhere. and happening because of u.s. sanctions

clinton: there are those who would like to lift the sanctions.. i am not one of them

the un has backed this sanctions.. because of u.s. domination.. 1/2 million children in iraq die because of sanctions

Part 6 — Philip Agee, former CIA Case Officer
Philip Agee spent 13 years in the CIA before resigning in 1969. His book “Inside the Company: CIA Diary” ..His autobiography, “On The Run” .. In this speech given in 1991 after the first Gulf War, Agee analyses why the US invaded Iraq. He also describes “the war against the third world” as being fought for the natural resources, the labour and the markets of these third world countries the United States invaded either overtly or covertly since the end of World War II.

56 min – alternative interpretations of events that occurred: u.s. needed a crisis to replace collapse in europe.. because military expenditures are the motor of the economy. 75: nsa 68 written by paul nitzi.. main conclusion: u.s. & other free nations.. will experience a decline in economic activity unless more positive govt programs.. this was expansion of military. truman: our homes/nation all things we believe in are in great danger.. created by rulers of soviet union… actually there was no threat from soviet union.. became the justification for this program. result – in 50-52 – u.s. military budget tripled.. the beginning of the permanent war economy..

Part 7 — Amy Goodman: CIA Sanctioned Mass Genocide
Amy Goodman talks about two genocides Indonesia committed, first against its own people in 1965 and then against the people of East Timor in 1975. Both of these mass slaughters were sanctioned by the United States government and aided by the CIA. This excerpt includes scenes from a film Bitter Paradise.

1:17 – amy – didn’t invade until suharta sat down with ford and kissinger.. he was worried that the u.s. might cut off military if they invaded.. but he got the ok.. and so he invaded. dec 7. 5 journalists…. cut off genitals, shoved into mouth,.. and shot them. after invasion.. closed e timor to outside world for more than a decade.. proportionately worse than cambodia. u.s. official enemy in cambodia.. but indonesia was official ally of u.s…. so u.s. not going to speak about timor. one report by chronkite for 30 sec then not a mention for next 17 yrs.

Part 8 — The Panama Deception
Excerpt of documentary …untold story of the December 1989 US invasion of Panama. The United States military deliberately attacked and destroyed primarily residential neighbourhoods, killing an estimated 3-4000…. the role the US govt & mainstream media ..in suppressing info about US foreign policy.

1:22 – media in total collab with govt. focus on noriega with exclusion to the people. he had been on cia payroll since 60s. despite evidence that noriega was involved in drug trafficking bush keeps him on staff with raise. aug 83 – he becomes commander of nicaraguan military. helps supply weapons to contra in costa rica.

dec 20 – u.s. troops invade panama – operation just cause.. (did they create this crisis)

1:35 – panama does survey – more than 4000, the u.s. says military says 250 civilians were killed. just clearly false. so easy to tell for any journalist.. but they’re not telling it… focus with utter ethno-centrianism on american lives lost… ie: #20 american to die… to date.. finding 15 mass graves.. throughout panama.. and some are on u.s. military bases.

1:38 – clear that this invasion was illegal.. yet 4 top papers were in support of it.. media are corp america.. we are a plutocracy. media is not close to ordinary people.. we desperately need to find new ways to hear voices.

in march 1991 – president guillermo endara proposed a constitutional amendment that would forever abolish panama’s right to have an army. later that year a law was passed by the u.s. congress to renegotiate the panama canal treaties to ensure continued u.s. military presence in panama, on the grounds that panama was no longer capable of defending the canal.

1:45 – voice for anti-war movement for 3 decades… we’re going to have to take some long evenings.. because this planet is greatly troubled.. and the cause of that trouble is our own govt. april 5 67 – mlk: the greatest prevailer of violence on earth is my own govt… this caused most anger toward him

last yr – military budget.. more than 1/3 of all expenditures on the planet… we have a war society. we call ourselves a democracy.. we are absolutely a plutocracy.. and we’re responsible.. and we will pay the price for it.

kissinger: when iran/iraq war began… he said – i hope they kill each other. … all over.. where the masses of poor people live. the worst violence we could unleash and then the strangulation of the sanctions.. mayflower; slaves from africa; philippine/american war – we killed more than a million philipinnos.. but we call it the spanish/american war..planning invasions right now.. that will react to in 5 years.. we have to stop all military interventions and cancel all debts..

brian: do we want to be part of this course to ultimate destruction.. consciousness.. that we’re all inexplicable connected..

Willson served in the US Air Force from 1966 to 1970, including several months as a combat security officer inVietnam. He left the Air Force as a Captain. He subsequently became a member of Vietnam Veterans Against the War and Veterans For Peace (Humboldt Bay Chapter 56, California, later Portland, OR Chapter 72). Upon completion of Law School at American University in Washington, D.C., he became a member of the District of Columbia Bar. Willson has had a variety of jobs including penal consultant, prisoner rights advocate, dairy farmer, legislative aide, town tax assessor and building inspector, veteran’s advocate, and small businessman.

As a trained lawyer and writer, he has documented U.S. policy in nearly two dozen countries. Since 1986, Willson has studied on-site policies in a number of countries, among them Nicaragua, El Salvador, Honduras,Panama, Brazil, Argentina, Mexico, Colombia, Ecuador, Cuba, Haiti, Iraq, Israel (and Palestinian territories),Japan, and Korea, both North and South. Documenting the pattern of policies that he says “violate U.S. Constitutional and international laws prohibiting aggression and war crimes,” Willson has been an educator andactivist, teaching about the dangers of these policies. He has participated in lengthy fasts, actions of nonviolentcivil disobedience, and tax refusal along with voluntary simplicity.