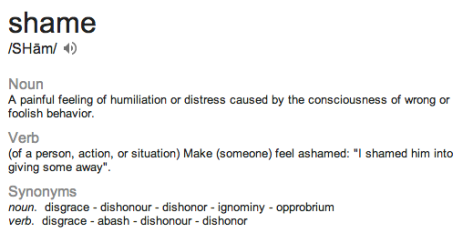 Why Shame Is So Prevalent in Classrooms – Super Soul Sunday

humiliation – i did something bad

i may be making a mess.. but i am not messy

the less you talk about it (shame) the more you’ve got it.. shame grows exponentially with 1. secrecy 2. silence 3. judgment

same cannot survive empathy.. it depends on me buying in on the belief that i’m alone..

i know you ness

Image above from Brene in her recent post on shame.

I don’t see any evidence of “good shame.” Not in my research and not in the research being done by other affect researchers.

I define shame as “the intensely painful feeling or experience of believing we are flawed and therefore unworthy of love and belonging.” Along with many other shame researchers, I’ve come to the conclusion that shame is much more likely to be the source of dangerous, destructive, and hurtful behaviors than it is to be the solution.

The following from Brene Brown‘s TED – shown below.

Shame is the swampland of the soul.  – someone else’s quote

shame is the gremlin that tells you you’re not good enough.

if we could quiet it down and walk in… we could see that the critic that is laughing is us.

guilt is – i did something bad. i’m sorry i made a mistake. focus on behavior.

people without shame – no capacity for empathy.

shame is an epidemic in our culture.

shame needs secrecy, silence and  to judgment to grow – exponentially.

the antidote to shame is empathy. the two most powerful words – me too.

The requirement that a child go to school for about 6 hours a day, 180 days a year, for about 10 years, whether or not he learns anything there, whether or not he already knows it or could learn it faster or better somewhere else, is such a gross violation of civil liberties that few adults would stand for it. But the child who resists is treated as a criminal.                   – John Holt

Shame derives its power from being unspeakable. That’s why it loves perfectionists—it’s so easy to keep us quiet.

Shame is highly correlated with addiction, violence, aggression, depression, eating disorders, and bullying. Researchers don’t find shame correlated with positive outcomes at all—there are no data to support that shame is a helpful compass for good behavior.

.. when I asked the research participants how they normally responded to shame before they started working on shame resilience, I heard many comments like these: “When I feel shame, I’m like a crazy person. I do stuff and say stuff I would normally never do or say.” “Sometimes I just wish I could make other people feel as bad as I do. I just want to lash out and scream at everyone.” “I get desperate when I feel shame. Like I have nowhere to turn—no one to talk to.”

Perfectionism is a form of shame.

The important thing to know about worthiness is that it doesn’t have prerequisites.

via Jon Ronson, in so you’ve been publicly shamed..

on the forever ness of shame inciting us to be murderers.. of selves/others.

again – eudaimonia matters – everyone getting a go everyday… matters.