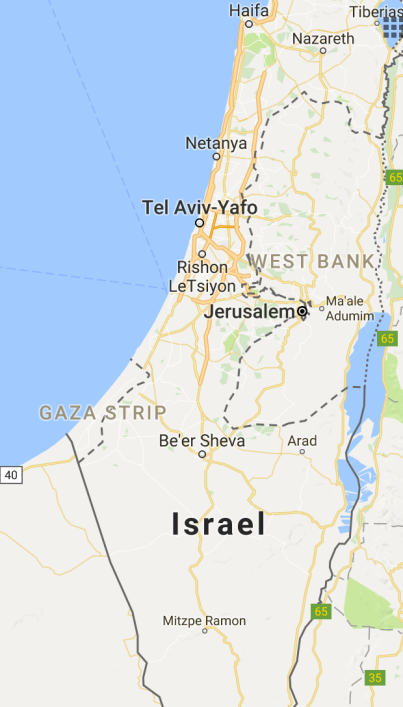 The Gaza Strip (/ˈɡɑːzəˈstrɪp/;Arabic: قطاع غزة‎‎ Qiṭāʿ Ġazzah[qɪˈtˤɑːʕ ˈɣazza]), or simply Gaza, is a small self-governing Palestinian territory on the eastern coast of the Mediterranean Sea, that borders Egypt on the southwest for 11 kilometers (6.8 mi) and Israelon the east and north along a 51 km (32 mi) border. Gaza, together with the West Bank, comprise the Palestinian territories claimed by the Palestinians as the State of Palestine. The territories of Gaza and the West Bank are separated from each other by Israeli territory. Both fall under the jurisdiction of the Palestinian Authority, but Gaza has since June 2007 been governed by Hamas, a Palestinian Islamic organization which came to power in free elections in 2006. It has been placed under an Israeli and U.S.-led international economic and political boycott from that time onwards.

The territory is 41 kilometers (25 mi) long, and from 6 to 12 kilometers (3.7 to 7.5 mi) wide, with a total area of 365 square kilometers (141 sq mi). With around 1.85 million Palestinians on some 362 square kilometers, Gaza ranks as the 3rd most densely populated polity in the world. An extensive Israeli buffer zone within the Strip renders much land off-limits to Gaza’s Palestinians. Gaza has an annual population growth rate of 2.91% (2014 est.), the 13th highest in the world, and is often referred to as overcrowded. The population is expected to increase to 2.1 million in 2020. By that time, Gaza may be rendered unliveable, if present trends continue. Due to the Israeli and Egyptian border closures and the Israeli sea and air blockade, the population is not free to leave or enter the Gaza Strip, nor allowed to freely import or export goods. Sunni Muslims make up the predominant part of the Palestinian population in the Gaza Strip.

Despite the 2005 Israeli disengagement from Gaza, the United Nations, international human rights organisations, and the majority of governments and legal commentators consider the territory to be still occupied by Israel, supported by additional restrictions placed on Gaza by Egypt. Israel maintains direct external control over Gaza and indirect control over life within Gaza: it controls Gaza’s air and maritime space, and six of Gaza’s seven land crossings. It reserves the right to enter Gaza at will with its military and maintains a no-go buffer zone within the Gaza territory. Gaza is dependent on Israel for its water, electricity, telecommunications, and other utilities.

When Hamas won the Palestinian legislative election, 2006, Fatah refused to join the proposed coalition, until a short-lived unity government agreement was brokered by Saudi Arabia. When this collapsed under joint Israeli and United States pressure, the Palestinian Authority instituted a non-Hamas government in the West Bank while Hamas formed a government on its own in Gaza. Further economic sanctions were imposed by Israel and the European Quartet against Hamas. A brief civil war between the two groups had broken out in Gaza when, apparently under a U.S.-backed plan, Fatah contested Hamas’s administration. Hamas emerged the victor and expelled Fatah-allied officials and members of the PA’s security apparatus from the Strip, and has remained the sole governing power in Gaza since that date.

Cutting the electricity is a form of blocking access the Internet. Israel is doing so in Gaza.

Palestine, officially the State of Palestine is a de jure sovereign state in the Middle East claiming the West Bank and Gaza Strip with East Jerusalem as the designated capital although its administrative center is located in Ramallah.Wikipedia

“All thoughts of persistance and resistance end with the first egg that rots in your refrigerator” (Gaza is without power or drinking water) https://t.co/nxjdNWzTr1 (http://twitter.com/mollycrabapple/status/885452098229415936?s=17)

Tonight, millions of Jews r celebrating Passover, a celebration of Jews fleeing slavery. The youngest asks, “Why is this night different from all other nights?” 2nite the parents of 15 Palestinians in Gaza are burying their children massacred by the Israeli state. #FreePalestine (http://twitter.com/SherryTalksBack/status/979894705554149376?s=17)

Glenn Greenwald (@ggreenwald) tweeted at 8:47 AM on Sun, Apr 01, 2018:
Imagine if an Arab-majority country were imprisoning 1.8 million Jews in a tiny open-air cage, preventing them from leaving, controlling all aspects of their deprived civic lives, then picking them off with snipers in the back when they protested. Might the reaction be different? https://t.co/y0UgTBjDS2
(https://twitter.com/ggreenwald/status/980456592091922444?s=03)

Last week I recommended following @Joo_Gaza, a 24-year-old nursing student & activist living in Gaza who has been on the scene for the massacres. Now @jeremyscahill interviewed him for his podcast; please listen to what’s happening in Gaza; starts at 7:35 https://t.co/rqLuPO1dI7 (http://twitter.com/ggreenwald/status/981500614944395265?s=17)

The positive reviews of Blumenthal’s Gaza book are on his new book. Eva Bartlett’s ‘In Gaza’ blog used to support Assad. Palestine has always been a career choice for some people, one which is used to whitewash oppression, and we seriously need to stop denying that. (http://twitter.com/joeyayoub/status/982574472409550848?s=17)

Gaza breaks my heart but the so called first world countries who have the power to stop apartheid #Israel from killing unarmed Palestinians only respond with action when it’s white people dying. #FreeGaza #apartheid https://t.co/tqkzD8GrQf (http://twitter.com/bonifacemwangi/status/982957603746705408?s=17)

Here’s the segment I did this morning on @DemocracyNow about what Israel is doing in Gaza https://t.co/OQK7W4Yz3K

If you’re a journalist covering Gaza, please do get in touch with @rohantalbot to be able to receive @MedicalAidPal’s incredibly important updates https://t.co/u7kt2MsTuq (http://twitter.com/josephwillits/status/988379188502638594?s=17)

As Israel applauds US Embassy move to Jerusalem and its implicit erasure of the Israel-Palestine border https://t.co/8MoXzBuF63 Israel plans to shoot any Palestinian who crosses that border from Gaza https://t.co/2tWK2MUql2 https://t.co/mDWB3m46Ms (http://twitter.com/KenRoth/status/995252225067945984?s=17)

amnestypress (@amnestypress) tweeted at 5:35 AM – 14 May 2018 :
Reports of 16 people killed with live ammunition in #Gaza including a 12 and 14 yr old. These deaths appear to fit into a continuing pattern of excessive use of force, including use of live ammunition against unarmed protesters which must stop immediately. (http://twitter.com/amnestypress/status/995990940002275328?s=17)

David Klion (@DavidKlion) tweeted at 5:38 AM – 14 May 2018 :
What Israel is doing in Gaza is not complicated. It is immoral and inhuman. America is responsible for financing and arming Israel and for provoking these atrocities with Trump’s embassy move.
If you are Jewish and want to stand on the side of righteousness, follow @IfNotNowOrg. (http://twitter.com/DavidKlion/status/995991818704707584?s=17)

Omar Shakir (@OmarSShakir) tweeted at 5:44 AM – 14 May 2018 :
History will remember today as day US/Israeli officials celebrated embassy move as Israeli forces fired on unarmed Palestinians in Gaza, who they’ve kept caged in for decade, occupied for half century & blocked (refugees) from recognized right to return for 70 years. Black mark. https://t.co/Ijt6MWo9So (http://twitter.com/OmarSShakir/status/995993279081697280?s=17)

Oz Katerji (@OzKaterji) tweeted at 6:32 AM – 14 May 2018 :
This was me in Gaza at a border protest in June last year. I could just as easily be one of those journalists bleeding out on the ground from a sniper’s bullet. The kids on those protests are not terrorists, they are just teenagers with hopes and dreams like the rest of us. https://t.co/fIYZOsRrH1(http://twitter.com/OzKaterji/status/996005399957594112?s=17)

إبن بالدوين (@joeyayoub) tweeted at 6:37 AM – 14 May 2018 :
Israelis and Americans enjoying their time around the embassy while Israeli troops slaughter Gazan civilians is actually the perfect metaphor for what is erroneously called a ‘conflict’. There is no conflict. Occupiers kill the occupied. https://t.co/ZnlmmYta8F (http://twitter.com/joeyayoub/status/996006550253850624?s=17)

(Pictures taken at the same time this afternoon) https://t.co/0ySzaGjQC9

UN Human Rights (@UNHumanRights) tweeted at 9:09 AM – 14 May 2018 :
“Shocking killing of dozens, injury of hundreds by Israeli live fire in #Gaza must stop now. The right to life must be respected. Those responsible for outrageous human rights violations must be held to account. The int’l community needs to ensure justice for victims” – #Zeid. https://t.co/hBb7825Sp8 (http://twitter.com/UNHumanRights/status/996044858048557058?s=17)

Simone Zimmerman (@simonerzim) tweeted at 11:34 AM – 15 May 2018 :
In the heart of Tel Aviv, israelis are shutting down traffic, chanting that we don’t want another war. this is not a solution. no one is more safe because of this. end the occupation. end the siege. Jews and Arabs refuse to be enemies. In solidarity with Gaza. https://t.co/OXbygBFZgW(http://twitter.com/simonerzim/status/996443814679236610?s=17)

a suicide in gaza

In Gaza, even pregnant women have committed suicide, saying they don’t want to bring children into a life in Gaza. In April, a woman who was seven months pregnant slit her wrists.
https://t.co/GM4guaeieg
Original Tweet: https://twitter.com/ASE/status/997830603079913472

On a single day in March, a girl of 15 &amp; a boy of 16 both hanged themselves. Among the dead are men who despair bc they can’t support their families; women &amp; children who are victims of abuse, often in situations of severe poverty &amp; overcrowding. https://t.co/GM4guaeieg
Original Tweet: https://twitter.com/ASE/status/997830386729340929

I asked Mohanned’s mother how she explained Gaza to a child. She said there was nothing to explain. “Children see for themselves. The checkpoints, bombings, house raids – they learn it’s the same for all of us.”

The rise in suicides is part of a much wider crisis of mental health in Gaza, he said. Almost 400,000 children are said by Unicef to be traumatised and in need of psychosocial support. Drug addiction, mostly to powerful painkillers, is rife. “The Israelis know this,” said Awadallah. “So the war being waged now is designed to break our resilience – not our resistance.”

Glenn Greenwald (@ggreenwald) tweeted at 5:55 AM – 20 May 2018 :
Norman Finkelstein’s career as an academic was destroyed by Alan Dershowitz because of his criticisms of Israel. Read what he told @jeremyscahill about what Gaza is: this is what the US is supporting and long has enabled: https://t.co/BiMysec2SP (http://twitter.com/ggreenwald/status/998170361425465344?s=17)

Sharif Kouddous (@sharifkouddous) tweeted at 6:40 AM – 29 May 2018 :
Israel has been bombing Gaza regularly for the past couple of weeks. After 3 Islamic Jihad members were killed, 24 mortar shells were fired from Gaza onto southern Israel today. Israel has now launched 30 missiles on Gaza. (http://twitter.com/sharifkouddous/status/1001443184571027456?s=17)

Borzou Daragahi  (@borzou) tweeted at 4:24 AM – 2 Jul 2018 :
Retweeting this, just cuz the site of ordinary Palestinians living under hellish conditions in besieged Gaza bringing light to their dilemma with grace, integrity, and joie de vivre seems to have triggered so many bigots https://t.co/73PF4QIWT0 (http://twitter.com/borzou/status/1013730189929582593?s=17)

Democracy Now! (@democracynow) tweeted at 6:59 AM – 30 Jul 2018 :
Israel’s attacks on Gaza are “hideously ugly,” says Noam Chomsky. “Here’s a population kept in a prison in an occupied territory, fed a diet to keep them at bare survival, constantly used as a punching bag… [It’s] one of the most extraordinary scandals… in the modern world.” https://t.co/6FhgsjlOhC(http://twitter.com/democracynow/status/1023915973353660416?s=17)

on being banned to visit.. yet us gives Israel 3 b a yr

Hagai El-Ad (@HagaiElAd) tweeted at 5:36 AM – 8 Dec 2019 :
1// “Free and equal? We’ve learned that the stretch of land between the Jordan River and the Mediterranean Sea is run by one government, ruling over all people, with a conviction that only Israelis are worthy of freedom and equality, not Palestinians.” https://t.co/VFquLCnuTG (http://twitter.com/HagaiElAd/status/1203654600701689856?s=17)

bored w quarentine? we in gaza have been living it for 14 yrs

This is the news we all feared the most.

#Gaza’s health sector, battered and broken by 13 years of illegal closure and blockade and the burden of thousands of injuries inflicted at the Great March of Return, is not prepared for #coronavirus.

Pray that it stays contained. https://t.co/15gSlHex6H

Israeli drones hovering over our heads is a constant reminder that they can kill anyone, anytime. Now we get 4 hrs of elect per day since the power plant had to shut down after Israel halted the entry of fuel. It’s all dark and hot here. Turn our lights back on…Open up Gaza.
Original Tweet: https://twitter.com/abier_i/status/1295817165048815621

21 min – i often think of our situation.. and i never see an end