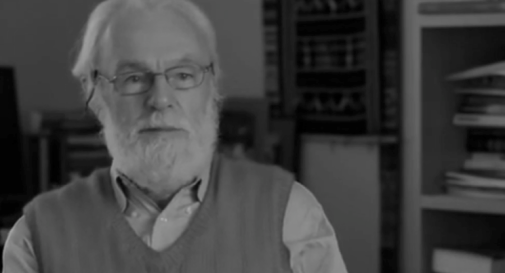 intro’d to David while watching – for sale the american dream – by aljazeera – shown via thought maybe site (24:40):

maybe we have to think about a completely different system. – David

then found these from his tweets:

A ray of hope from Vancouver – benches that unfold into shelters and read “This is a bench” during the day, but light up to reveal “This is a bedroom” at night. Perhaps a small step on what David Harvey, author of Social Justice and the City, calls the “path from an urbanism based on exploitation to an urbanism appropriate for the human species”.

we have a system where no part of it is working..

we want to really start to think about going forward..

in a world where there’s mass alienation… people are starting to sit down together.. and some of these are working… trying to find out new ways of relating

from 17 contradictions & suggestions (his latest book):

bitcoin – a right wing response to changes.. we’ve got to come up with a left wing solution

The crisis of planetary urbanization

In his most recent trip to Brazil, David Harvey talks about the urban protests dubbed “middle class revolts” that have been taking place all over the world, from São Paulo to Istanbul, against the backdrop of what he calls the “crisis of planetary urbanization”.

This lecture took place in Curitiba on November 18th 2014, during a series of talks entitled “The Political Economy Of Urbanization”, marking the publishing of the second and final volume of his COMPANION TO MARX’S CAPITAL. This trip took him also to the cities of Brasília, Recife, Fortaleza and São Paulo.

33 min – reconsidering the role of the city – DG

52 min – what happens when a city stops moving.. – what happened was – Juliani came out and say – everyone get out and start shopping… – DH

1:21 – large percentage of proletariat are employed to threaten the rest of the people – DG

Efforts are being made to establish an anti-capitalist system based on self-reliance. It involves the setting up of communes, collectives and cooperatives. Important steps have also been taken in education. I would like to go to Rojava to see things for myself.

Professor, CUNY Graduate Center. Author of Seventeen Contradictions and the End of Capitalism, Rebel Cities, A Companion to Marx’s Capital, and more.

David W. Harvey FBA (born 31 October 1935) is the Distinguished Professor of Anthropology and Geography at theGraduate Center of the City University of New York (CUNY). He received his PhD in Geography from the University of Cambridge in 1961. Harvey authored many books and essays that have been prominent in the development of modern geography as a discipline. He is a proponent of the idea of the right to the city.

Social Justice and the City (1973) expressed Harvey’s position that geography could not remain ‘objective’ in the face of urban poverty and associated ills. It has been cited widely (over 1000 times, by 2005, in a discipline where 50 citations are rare), and it makes a significant contribution to Marxian theory by arguing that capitalism annihilates space to ensure its own reproduction.

trump doing major infrastructure.. will be job creation.. boom econ… will be debt financed…. will infrastructure be targeted.. to stuff to help productivity

i would say will be successful in boosting econ.. at expense of environment & displacing people.. et al… publicly subsidized gentrification… extracting value for public/private ness

airbnb still in that middle stage.. some getting income.. at some point realize they are becoming slaves..

17 min – if people want to continue to engage in this they’ve got to find a way of doing it outside of this capitalistic form of organization.. how to do that is a big question..municipality has to start to cultivate that kind of discussion..

18 min – if smart city is about disposing sewage more efficiently.. i’m in favor of that.. et al.. but big problems in cities are problems of social relations/meaning.. quality of daily life and experience.. and i don’t see smart cities addressing any of that.. ie: racism; how to take care of older people; ..

5 min – the hydrological cycle..  i think capital is like that.. goes from ie: liquid to vapor.. money to commodities to production.. so capital circulates.. in the capital case.. not a cycle.. but a spiral.. ie: spiraling out of control.. has to grow.. constantly trying to get profit

hoping this one means .. he’s for sans money/measure

david harvey goes one step farther (than simmel’s: structured, institutionalized world in which the relationships interpreted by money have replaced nature w the metropolis).. drawing the consequences of the power relationships that simmel does not manage to confront.. money, he asserts, claims to rep the value of social labor but in may respects distorts or even falsifies it.. ‘this gap between money and value it reps constitutes a foundational contradiction of capital’ .. and that contradiction for him, is a potential point of departure for struggling against capitalist social relation sand eventually, creating an alt