so
fractal = emulating a quality
ie: we are all learners… so what i want for my kids, i should be doing, etc
getpivot = ability for a very sophisticated zoom in and zoom out to bring together things you might not otherwise see
about what you are learning/doing/noticing/imaginingand now
mindset = seeing everything as an opportunity for growth 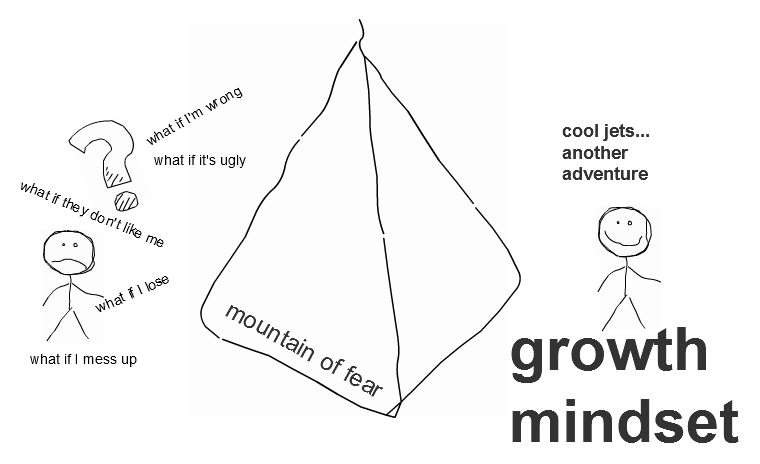 How do you see things? How do we embrace fear?
Carol Dweck in Mindset suggests we look with wonder for the potential of growth in any situation.
We need to model that, we need to do that in education. 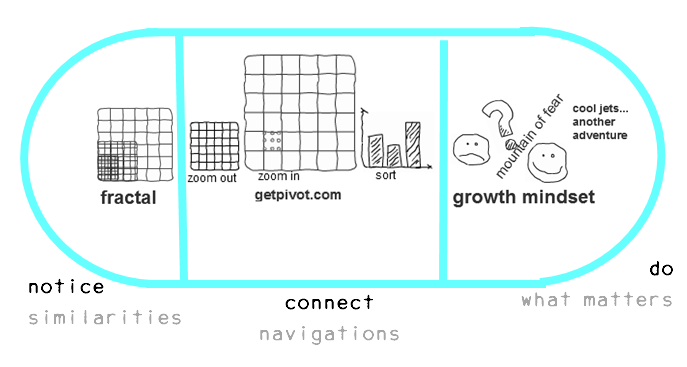 a valuable word.. and should be used frequently…

thank you for continuing to mold mindsets… Carol

the inverse power of praise

Alfie Kohn on criticism of praise – posted 2012 in washington post:

Praise isn’t feedback (which is purely informational); it’s a judgment — and positive judgments are ultimately no more constructive than negative one.

Some years after laying out these concerns, I came to realize that praise was troubling in yet another way: It signals conditional acceptance. Children learn that they’re valued — and, by implication, valuable — only when they live up to the standards of a powerful other. Attention, acknowledgment, and approval must be earned by doing a “job” that someone else decides is “good.” Thus, positive reinforcement is not only different from, but antithetical to, the unconditional care that children need: to be loved just for who they are, not for what they do. It’s no surprise that this strategy was designed to elicit certain behaviors rather than to promote children’s psychological health.

But the critical distinction between effort and ability doesn’t map neatly onto the question of praise. First of all, while it’s impossible to dispute Dweck’s well-substantiated contention that praising kids for being smart is counterproductive, praising them for the effort they’ve made can also backfire: It may communicate that they’re really not very capable and therefore unlikely to succeed at future tasks. (If you’re complimenting me just for trying hard, it must be because I’m a loser.) At least three studies have supported exactly this concern.

perhaps too – praise for effort exciting more effort.. of whatever they were doing .. rather than ongoingly.. them questioning what they are doing as well

ie people see and think I’m working hard at this…but does the this matter to me.. today?

Third, to the extent that we want to teach the importance of making an effort — the point being that people have some control over their future accomplishments — praise really isn’t required at all. (Dweck readily conceded this in a conversation we had some years ago. Indeed, she didn’t seem particularly attached to praise as a strategy and she willingly acknowledged its potential pitfalls

..praise is more likely to function as a tool for imposing our will and eliciting compliance.

The problem is with our need for control, our penchant for placing conditions on our love, and our continued reliance on the long-discredited premises of behaviorism.

My colleagues and I are taking a growth-mindset stance toward our message to educators. Maybe we originally put too much emphasis on sheer effort. Maybe we made the development of a growth mindset sound too easy. Maybe we talked too much about people having one mindset or the other, rather than portraying people as mixtures. We are on a growth-mindset journey, too.

calling a big timeout (above article oct 2015)….It seems the growth mindset has run amok.

saying things like ‘I tell all my kids to try hard’ or ‘you can do anything if you try’.”

“That’s nagging, not a growth mindset,” she says.

In a follow-up, the kids who had more early process praise—relative to person praise—sought more challenges and did better in school. “The more they had a growth mindset in 2nd grade the better they did in 4th grade and the relationship was significant,” Dweck wrote in an email. “It’s powerful.”

oy. get what she’s saying.. taking partial idea… balance.. and non-partiality matters. but huge caution to success being.. how we do in school.. and earlier.. to statements w assumed agendas, supposed to’s, raised eyebrows even…. ie: not good at math yet. we have no idea.. unless we listen.. and give space.. ie: science of people in schools ness..