thinking wearable – frees us up to us – even more 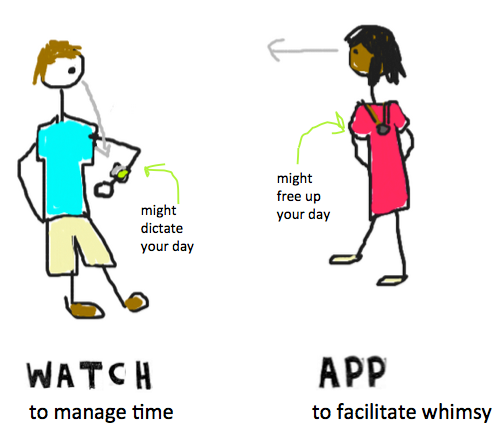 You’ve got to make the systems so that they help people pay attention to the world in front of them. 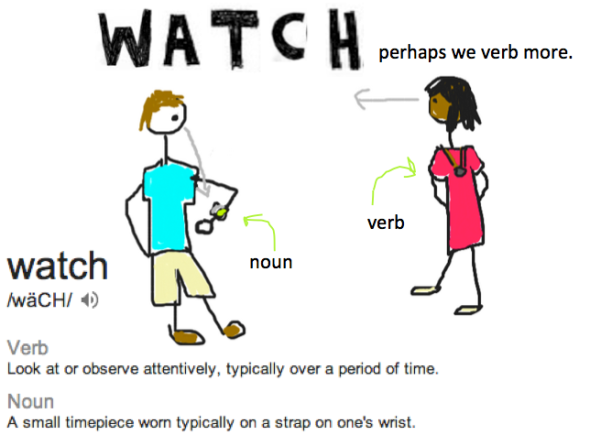 how to ensure the focus doesn’t go toward the sync, and like agriculture, we lose site of the why, and focus only on some pre-determined efficiency. perhaps we keep the focus on curiosity – the natural whimsy of a person. becoming more and more natural (eudaimonious), the more free the person truly feels. ie: the more they feel they have nothing to prove.
how to create a device (some small chip you can add to your necklace, bracelet, bobby pin, glasses, headband, shoe, cell phone, laptop, earring, ..?) that you determine when to take it off, put it on. and how cool if now people know enough code, (or this gives them desire to learn code) that everyone codes their own device, creates their own device. we’ve been prototyping a non-functional device (Alex’s suggestion) which really opens up open. your not handed a device with set functions, you create functions.. as you wish.. flexible/perpetually in beta even. siri/neurocam/arduino/personal fabrication – ness.
how to be the least intrusive to people – worldwide – who are doing/being – wearable?
how to create/sustain an accessible/abundant data base – via redefinition of public ed – the only ask is that you put it on for minimum of 10 seconds a day… to talk to yourself. so then we have a ginormous data base.. from every person, for at least 10 seconds a day, to draw on.. to see what we have been missing in regard to the interconnectedness in our own city.
[imagine the data from 10 seconds a day in a community of 70,000.  imagine the serendipitous interconnectedness – hastening the time between intention and action.]

You’ve got to make the systems so that they help people pay attention to the world in front of them.
– Clive Thompson

My ten year old comes into my office and he says, ‘Dad, I keep hearing you talk about Big Data. What is this Big Data thing you’re talking about?’  I said to him, ‘Imagine if your whole life you’ve been looking through one eye, and all of a sudden for the first time scientists gave you the ability to open up a second eye.  So what you’re getting is not just more data – you’re not just getting more vision, you’re getting a different dimension, a different way of seeing.’ And he said, ‘Dad, could computers open like a third eye, and a fourth – a thousand eyes?’  And I said, ‘That’s exactly what’s going on.’
– Rick Smolan, author of The Human Face of Big Data

elevating the power of story to be enough…  – Shilpa Jain

In all this, we have no vision statements or convenient blueprints – except a desire to live slow lives in a world that encourages you to catch up; ..

One final note: if I am (now) correct, and Apple has created something that most observers – including myself – didn’t think was possible in 2015, well, then this really is a Tim Cook breakthrough. The idea of a watch as a full-blown computer is not novel, but to create the future five years early in three different editions with all kinds of unique bands – and a buying experience to match – is something only Apple and their once-in-a-lifetime operational genius of a CEO could do, if indeed that is what they have done.