As a powerful advocate for nonviolence in the city of Providence, R.I., Gross struggles every day to make the city safe by starting with a basic goal: he encourages people to behave civilly toward one another.

He says we can never let up on that goal, as he learned firsthand as a youth worker on the streets of Boston in the 1990s. He met with gang members, churches, civic groups, business leaders, politicians and law enforcement officials to reduce spiraling violence in the city. He witnessed a transformation. As Toynbee might have said, it was a movement.

The only way to prevent that type of backsliding, according to Gross, is to “obsessively care every day what happens in the city.”

more on Teny on bif’s site.

non-violence institute –  make a deeper commitment to the cause

2001 – had to revisit the strength of liberalism.. what do we care about

we now have more people in jail

we now know how to cut homicide by 50%

we are wasting human capital…

we need to rebuild..

right now we are exceptional in homicides..

we need a national field.. it’s a very solvable problem..

makes us less of a competitive society.. (w/o human capital)

Teny is executive director of the nonviolence institute: 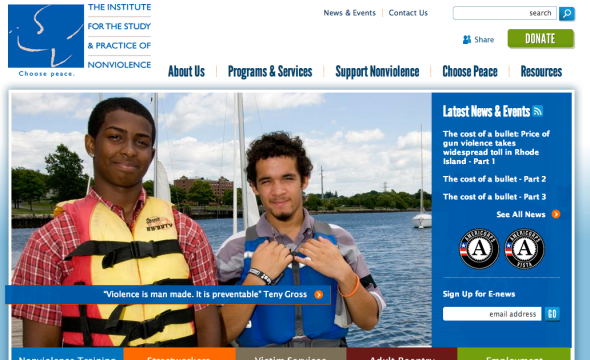 more on his work via Bill Taylor’s Practically Radical:

It’s the no-nonsense relationship between Dean Esserman’s cops and Teny Gross’s street workers – between law enforcers and former lawbreakers – that is the most vivid example of the unlikely partnerships that have been created in the interest of fighting crime.

Gross’s organization, which was established by a group of ministers in 2000, isn’t exactly the stuff of the Ivy League. It hires former gang members, convicted felons (including a few convicted of murder), and other recruits with deeply troubled pasts to walk and work the streets, deal with all kinds of tensions and social problems, organize after-school activities, intervene in fights and disagreements, and otherwise try to solve problems before they erupt into violence. In other words, his team of street workers will never be confused with civic-minded do-gooders or public-policy wonks. They are tough, gritty, complicated – which is precisely why they have such credibility among the kids (even the gangs) in the city’s roughest neighborhoods and why they are of such value to the cops.

Street workers are a daily reminder to all those in power that people who have done wrong in the past can be among the most useful members of our society.   – Teny

Teny was part of the group that trained the interruptors in boston in the 90’s.