What I discovered in New York City trash

New York City residents produce 11,000 tons of garbage every day. Every day! This astonishing statistic is just one of the reasons Robin Nagle started a research project with the city’s Department of Sanitation. She walked the routes, operated mechanical brooms, even drove a garbage truck herself–all so she could answer a simple-sounding but complicated question: who cleans up after us?

Robin Nagle is an anthropologist with a very particular focus… garbage

however you configure us.. in istanbul, paris, rio, london….

the relentlessness of trash.. it never stops coming..it must always be in motion

put on the uniform and you become invisible until you get in their way.. then there is scorn

the stigma is especially ironic..

how to bring them into the conversation.. how to craft a city that is sustainable and humane..

they are a form of reassurance.. the flow they maintain keeps us safe from ourselves

we’re going to be ok... Paulie

in our effort to reconfigure how we are going to exist on this planet.. we need to take into account ..all the costs ,,and all the expertise.. 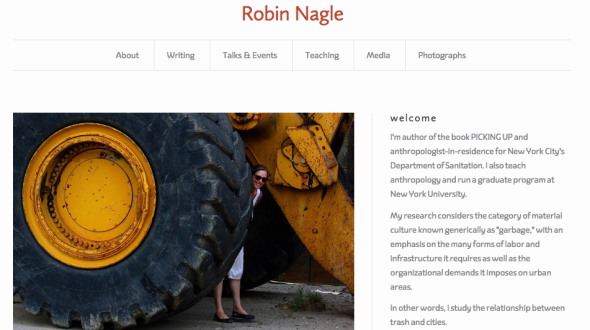 I study the relationship between trash and cities.

Robin is director of the anthropology program nyu:

Our guest is New York University professor and author Robin Nagle to discuss her newly released book titled “Picking Up: On the Streets and Behind the Trucks with the Sanitation Workers of New York City.” She suggests that the garbage men and women are the most important people on the payroll serving New York City’s 8.2 million residents.

no one is going to help you cheat your way in

52 min- your degree level is irrelevant to how well you do on the job, and how well you care for your partner on the street

next step – archives.. and relationship between land shape and garbage and history and memory

cost for garbage removal in ny this last year – 1.3 billion

Robin is one of the authors for discard studies:

Listening to New York City sanitation workers – and working side-by-side with them – NYU professor Robin Nagle uncovered a wealth of knowledge about the job and the people who keep the city clean.

Nagle also talks about our relationship with trash – and why we might want to respect, maybe even love, what we leave behind. This is an anthropological study well worth learning from.

ethnography – we hang out with people….

garbage is scary to us.. and it’s fascinating..

time – we live at the speed of lite.. we must move quickly.. so we can’t be encumbered by stuff – so that means it has to flow – has to be in perpetual motion

what endures of us..

photo album, piano, cooking pots.. stuff that has meaning in it.. so what endures is not in fact, stuff..

the story is that nothing endures.. unnerving/terrifying even..

so what does last? .. ironically.. the garbage does.

working on sanitation museum… specifically around the people