Isn’t this its own reward? – (flavors of success)

The measures we came up with:

Is it awesome? Does it matter?

Instead of embracing the diversity of the human mind, we have stigmatized the very differences that are so characteristic of humans.

The DSM (Diagnostic and Statistical Manual of Mental Disorders) declared war on the introverts, and the educationally challenged among others and has attempted to define what a normal human should be. An extroverted individual who works well with people, progresses well in conventional schooling, and will succeed in a conventional job.

in Stigmatizing the Human Mind

[paper on site, since posterous is folding]

Lucas was part of the self-directed math pilot.

He is the one that went before our district curriculum committee at the end of the pilot year, requesting that kids be free to write their own curriculum. 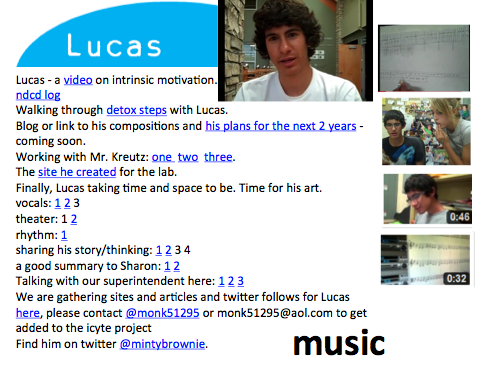 or for more videos on Lucas, go to youtube and type – tsdil, Lucas – into the search, or visit this tumblr.

slidedeck below on questioning normal – which we later renamed the skinny.

finding all the geniuses inside.. waiting to be seen/heard/loved.

and imagine if we called – facilitating curiosity – school – in the city – as the day?

7 billion such researchers/entrepreneurs/happy people.. no?